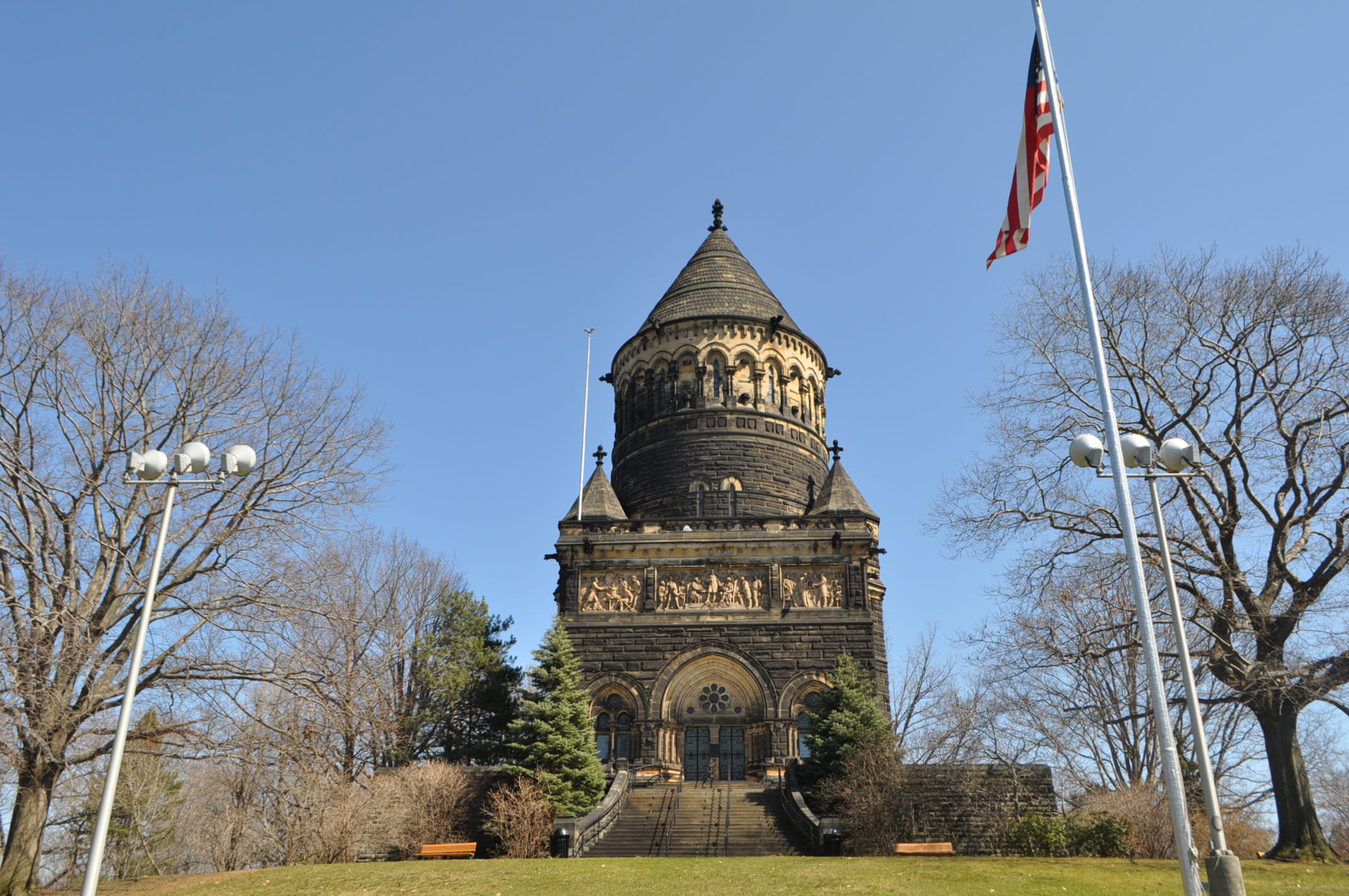 Listed on the National Register of Historic Places, the James A. Garfield Monument is the final resting place of the 20th President of the United States.

Listed on the National Register of Historic Places, the James A. Garfield Monument is the final resting place of the 20th President of the United States. The monument is open daily, April 1 through November 19, from 9:00 a.m. until 4:00 p.m. The building combines Romanesque, Gothic and Byzantine styles of architecture.

Designed by architect George Keller, the Garfield Monument was dedicated on Memorial Day, 1890. The Garfield Monument stands 180 feet tall and is constructed of Berea Sandstone. Around the exterior of the balcony are five, terra cotta panels by Casper Bubel, with over 110 figures all life size, depicting Garfield's life and death. The panels include Garfield as a teacher, as Major General in the Civil War, an orator, taking the oath of office and laying in state in the rotunda of the Capital in Washington DC.

President Garfield's casket, draped with an American Flag, is the only Presidential casket on full display. Mrs. Garfield's casket is also located in the crypt. The remains of their daughter Mary (Molly), and her husband, Joseph Stanley Brown, are in the two urns located in front of the Garfields' caskets.

Born in November 19, 1831, in what is now known as Moreland Hills, OH, President Garfield valued education. He graduated in 1856 from Williams College in Massachusetts, and became President of the Western Reserve Eclectic Institute (known today as Hiram College). Serving his country during the Civil War, Garfield rose to the rank of Major General. Convinced by President Lincoln that it was important to serve his country in Congress, Garfield was elected in 1862 serving for the next 18 years.

While attending the Republican Convention in 1880, Garfield became the "dark horse" nominee on the 36th ballot. Winning the election by only 10,000 votes, President Garfield took the oath of office on March 4, 1881. On July 2, 1881, just four months after being sworn in as president, Garfield left for a holiday with his family. Walking through the train depot in Washington, DC, Garfield was shot by a disappointed officer seeker; he lingered for two months, then died on Sept. 19, 1881, two months short of his 50th birthday.

President Garfield is the only American President that you would be able to visit his birthplace, home and final resting place in one day.

This video features a tour of the location.