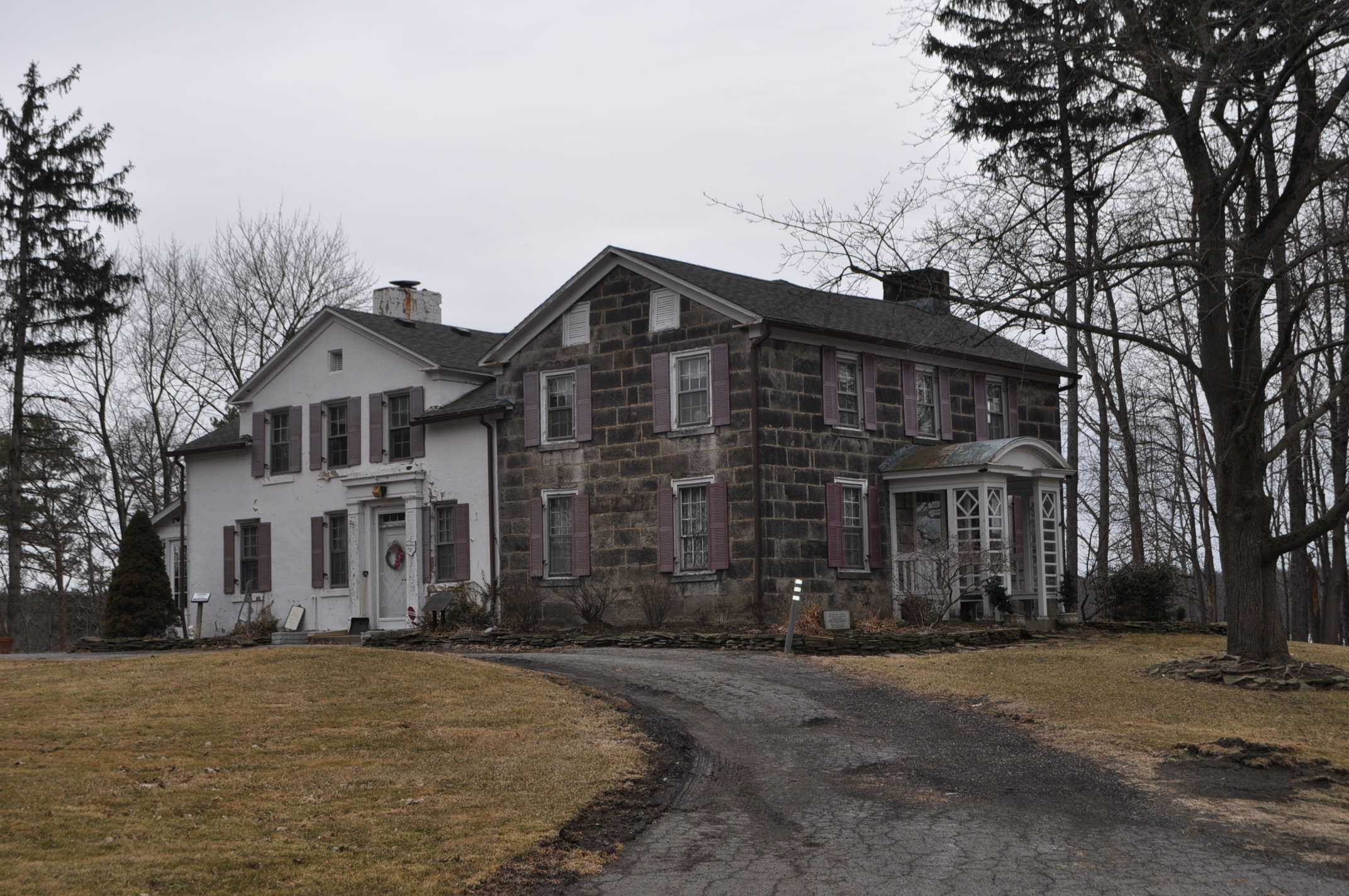 The Judge William Shaw Anderson house, also known as the Strock Stone House, was built in 1831 of huge blocks of sandstone, some weighing as much as 750 pounds, quarried from Stony Ridge on South Turner Road in Austintown.

History of the house

The Judge William Shaw Anderson house, also known as the Strock Stone House, was built in 1831 of huge blocks of sandstone, some weighing as much as 750 pounds, quarried from Stony Ridge on South Turner Road in Austintown. The 1907 publication, History of Youngstown and the Mahoning Valley, says the house was built by William McClure, but the first residents were William Strock and his family. In 1830, Strock bought 87 acres (350,000 m2) of land in Great Lot 8, Township 2, Range 3 of the Western Reserve from John Jordan. William Strock, who was born June 12, 1801 to Joseph Strock and Betsy Bensinger Strock in Tyrone Township, Pennsylvania., migrated to Austintown in 1813 or 1815 with his parents, his nine siblings, and 11 nieces and nephews. They settled in the southern part of Austintown township near the Smiths Corner area. William became a carpenter, married Lydia Crum, and moved into the stone house. John and Lydia had three children, two who died as infants. Their only surviving child, David, was born in 1832. In 1851, John and Lydia Strock sold the house and accompanying 108 acres (0.44 km2) to Francis Henry, who was active in the Restoration (reformed Baptist) movement. Henry lived in the house with his wife, Mary, and their four children until 1862 when they sold the house to David Anderson. David Anderson was a native of Londonderry, Ireland and immigrated to Philadelphia in 1831 or 1832. According to the History of Youngstown and the Mahoning Valley, Anderson worked setting curbstones for five years in Philadelphia. While in Philadelphia, he met Jonathan Wick who brought him to Brookfield area in 1839. Anderson and Wick eventually opened a store, Anderson and Wick, in Austintown. In 1843, Anderson opened a general store in Jackson Township which he continued to operate for 37 years. Anderson and his wife, Hannah L. Shaw Anderson, had four children including William Shaw Anderson, David Fitch Anderson, Julia E. Anderson, and Margaret J. "Maggie" Anderson. On 1870 census, David Anderson is the wealthiest man in Austintown Township with a real estate value of $42,000 and a personal estate value of $24,570. After Hannah died of an accidental fall in 1879, David reportedly let the house fall into disrepair. Donald Heffelfinger's unpublished History of the Meander says that David moved to a nearby frame house (just east of the Stone house, built during time of the Civil War) and used the stone house for an animal shelter. In 1890, David's oldest son, William Shaw Anderson, acquired the property and used it originally as a summer home. William and his wife, Louise Shields Anderson, had four children: Blanche Anderson, William Noble Anderson, Randall H. Anderson, and Anna Anderson. William, a prominent lawyer and Judge of the Youngstown Court of the Common Pleas, restored the house added onto it between 1912 and 1918. This addition included the sun porch, dining room, and dinette on first floor, three bedrooms and bath on second floor, and an enlarged cellar. He also added central heat. Other buildings on the property at this time included three barns, pump house, poultry house, bull barn, log house, milk house, ice house, tool house, tool shop and corn crib. Anderson's children, Randall H. and Blanche Anderson, acquired the house upon their father's death in 1925. They lived their until 1929 when the house and lands were acquired by the Mahoning Valley Sanitary District (MVSD). The house served as the residence for Chief Engineer of the MVSD until 1985.

The house is reputed to have been a stop on the Underground Railroad. This has yet to be proven, but some evidence appears to support this contention. Austintown was listed in Galbreath's History of Ohio as part of the path of the Underground Railroad that included "Salineville, New Lisbon, Canfield, Austintown, Edinburgh, Warren, Bloomfield, Rome, Lenox, Austinburg, Ashtabula Harbor." William Strock's brother, John Henry Strock, is described as one of the first abolitionists in Mahoning County. Additionally, Francis Henry, who owned the house from 1851-1862, appears on William Seibert's 1898 list of known underground railroad operators in Mahoning County. Additionally, Heffelfinger's unpublished History of Meander says that slaves were hidden in a tunnel that connected the basement with the barn.

Judge William Shaw Anderson, who lived in the house from 1890-1925 and was a prominent lawyer and judge in the Youngstown Court of Common Pleas, is said to have entertained William McKinley at the house. McKinley, who served as President of the United States from 1897-1901 was born in nearby Niles, Ohio on January 29, 1843.

The Austintown Historical Society maintains the William Shaw Anderson House, known as the Strock Stone House, along with help from the Mahoning Valley Sanitary District. The Austintown Historical Society maintains and furnishes the interior using period rugs and furniture donated by residents of Austintown including a slave quilt from South Carolina. The display includes a collection of antique washing machines in the basement. The parlor of the house contains antique furniture including an organ. One bedroom of the Strock Stone House contains period children's games and clothing. Another room is set up as a lady's bedroom replete with antique clothes including a wedding dress, coats, bloomers, purses, woolen swimsuits, and a depression sheet made from sugar sacks. The third bedroom, the man's bedroom, includes appropriate male furnishings including a man's shirt with a removable celluloid collar and collar keeper, a trunk circa 1890 from London, a wooden suitcase from Germany, and lift top commode. The fourth room, the quilting room, is furnished with an antique quilt rack complete with an antique quilt cover in the process of being made, a treadle sewing machine, a yarn winder, and a wooden ironing board accompanied by eight metal irons. The fifth bedroom, the office, includes an antique printing press, two 1920 Remington typewriters on an antique desk, five ledger books dated 1901 from local grocery stores, antique books, and pictures of early businesses in Austintown. The back porch of the house is arranged as a summer kitchen which includes an enamel top table; a Hoosier cabinet; an enamel wood fired stove; an antique enamel sink; antique dishes, cooking utensils and bake ware; pressure cookers and canning jars; and vintage spice and storage containers. The house is open for free guided tours the first Sunday of every month from 1-4 and by appointment for other times.