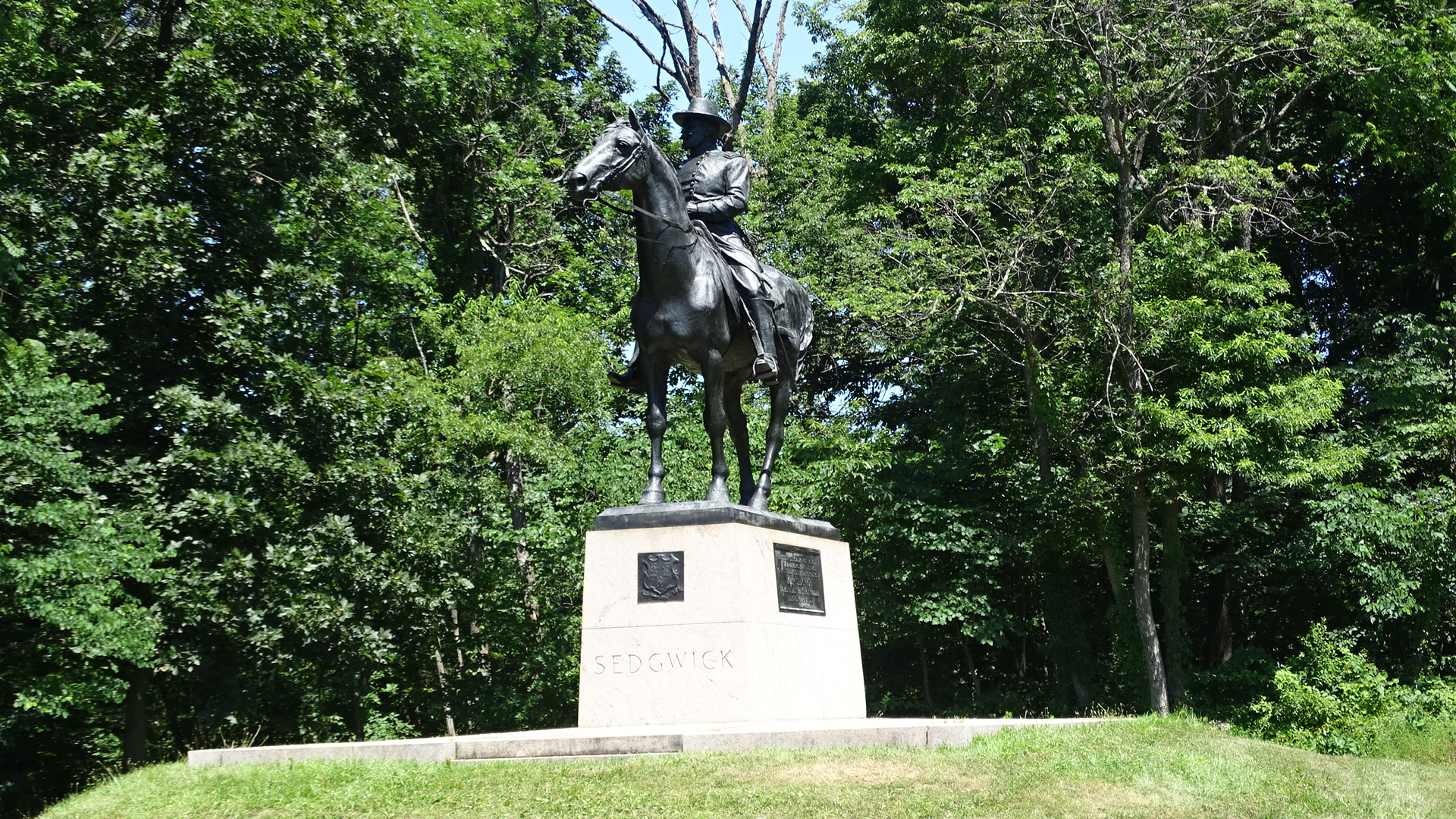 The equestrian monument to Major General John Sedgwick is south of Gettysburg on Sedgwick Avenue. It was dedicated in 1913 by the State of Connecticut.

John Sedgwick graduated 24th out of 50 cadets from the West Point Class of 1837 and served in a variety of posts, including the armies of both Taylor and Scott during the Mexican War. In 1855 he became the major of the 1st Cavalry Regiment, whose colonel was Robert E. Lee. Sedgwick took over from Lee as Colonel when Lee resigned his commission.

Sedgwick went on to command a division in the Peninsula, where he was wounded. He was wounded three more times and distinguished for gallantry in the East Woods at Antietam. He briefly commanded the 11th Corps before being given the 6th Corps, and performed well during the Chancellorsville campaign.

At Gettysburg the 6th Corps was the last to arrive on the field after an epic 30 mile night and day march. Although much of the corps remained in reserve during the battle, various portions were committed as needed at scattered points about the field. At one point Sedgwick found himself commanding units on both the extreme right and left flanks of the army.

After Gettysburg Sedgwick continued to distinguish himself and the 6th Corps. He was killed by a sharpshooter at Spottsylvania on May 9, 1864 shortly after announcing that "they couldn't hit an elephant at this distance." He is honored by a monument on the Spotsylvania battlefield near the location where he was killed. John Sedgwick was the senior United States officer killed in the Civil War.

A lifelong bachelor, Sedgwick was buried at Cornwall Hollow, Connecticut.

The statue of General Sedgwick mounted on his horse, Handsome Joe, was created by Henry K. Bush-Brown, who also created the equestrian statues of Generals Meade and Reynolds at Gettysburg as well as the bust of Lincoln on the Lincoln Speech Memorial.

When we visited Gettysburg in July of 2018, we decided to do a live stream on our YouTube channel while we were driving around the battlefield. During that live stream, we encountered some strange EMF activity around this monument and decided to stop and investigate a little bit further. This monument is not around any type of power lines or other power sources; however, strange EMF readings, which also converted over to actual words on our Ovilus device such as; "coffin", "southern", "borrow" where detected while we were in the area around the monument.

See the video attached to this page for that live stream.