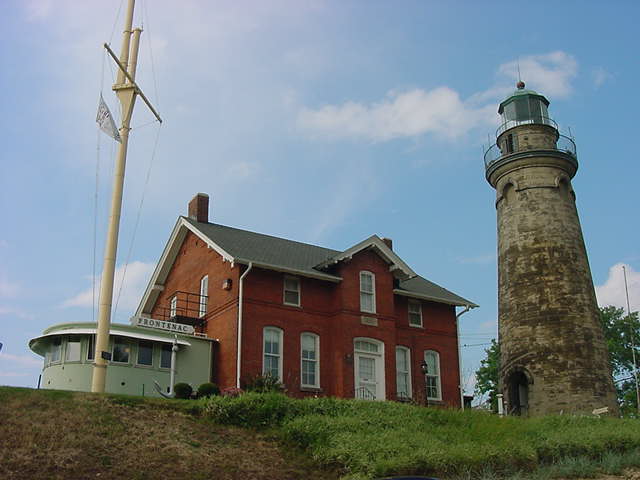 The lighthouse was built in 1871 and has a 60-foot tower with a detached keeper's house.

The Grand River (Fairport Harbor) Light is located in the village of Fairport Harbor, Ohio. The lighthouse was built in 1871 and has a 60-foot tower with a detached keeper's house. The light was decommissioned in 1925, replaced by the Fairport Harbor West Breakwater Light.

At one time the Coast guard considered using the keeper's house to house their personnel and demolish the tower but a letter writing campaign by local residents prevented it from happening. In 1945 the Coast Guard turned over ownership of the light to the town.

The tower is open to the public and the keeper's house currently serves as the Fairport Harbor Marine Museum and Lighthouse (the first of its kind in the country), operated by the Fairport Harbor Historical Society. Visitors can climb the lighthouse for a view of the harbor. Founded in 1945, the museum features exhibits about the history of the lighthouse and its keepers, a Fresnel lens, lifesaving equipment, life on the Great Lakes, ship models and maritime artifacts. There is a gift shop. The former pilothouse from the Great Lakes carrier the Frontenac is attached to the museum's building. The museum is open seasonally, and is located at 129 Second Street. The lighthouse and museum are said to be haunted. Legend has it that a ghost cat haunts the facility. Volunteers and tourists alike have reported feeling a cat rub against them, although the cat is never seen.

There are two prominent lighthouse keepers in the history of the Fairport Harbor Lighthouse. The first keeper of the light must be noted, Samuel Butler, as he was also an active abolitionist and made the haunted Fairport Harbor Lighthouse a northern terminal of the Underground Railroad, effectively guiding runaway slaves to the safety of Canada. This history of the site alone makes it a possible site that's haunted. But the second lighthouse keeper seemed a fixture and remained very attached to the lighthouse of Fairport Harbor, which he loved. Captain Joseph Babcock was the first keeper of the reconstructed lighthouse and keeper's dwelling, who also raised a family on the grounds. In fact, two of his children were born in the home, with one of them dying young at age five from smallpox.

The tragedy of losing "Robbie" at so young an age, certainly weighed heavy on the family, but Mrs. Babcock also had fallen ill and remained bed-ridden inside the house. For entertainment, she reportedly kept many cats. Many years later, some claim to have seen a ghost cat whisking about upstairs, describing it as a gray "puff of smoke." Interestingly, a mummified cat was found by a worker years later, and is displayed in a glass cabinet at the Fairport Harbor Museum to this day!