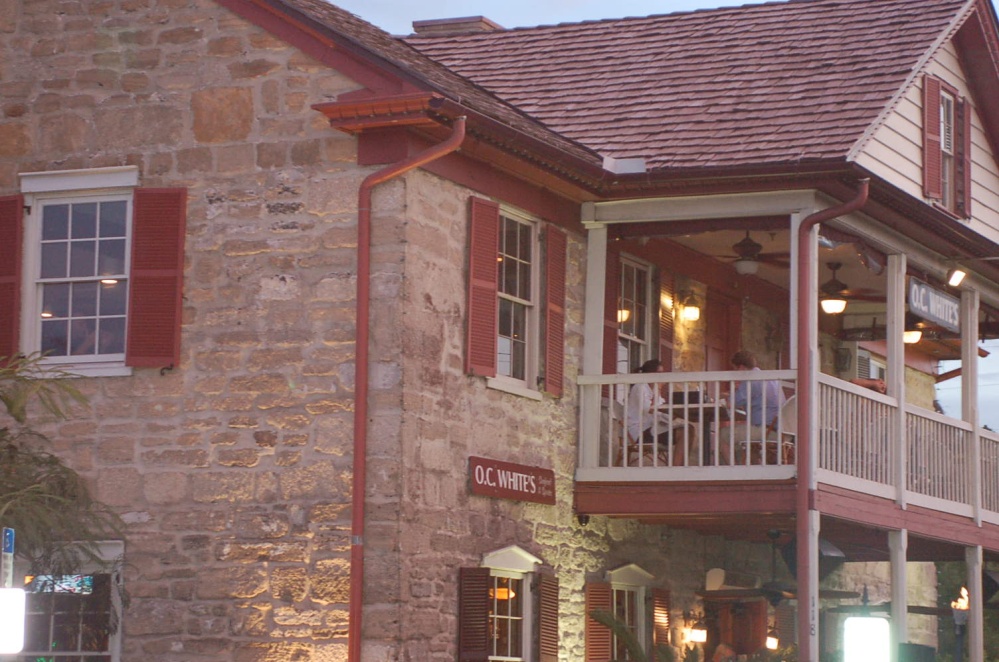 O.C. White's has a History dating back to 1790, originally constructed by Don Miguel Ysnardy a prominent St. Augustinian.

O.C. White's has a History dating back to 1790, originally constructed by Don Miguel Ysnardy a prominent St. Augustinian. The building is associated with significant aspects of the history of St. Augustine, the Nation's oldest city. The House served as one of the first hotels in St. Augustine. The building was eventually bought by the Worth family and remained that way for generations.

In 1904 the Worth Mansion was bought by a local cigar maker, then bought again in 1948 by George L. Potter, the one time owner of Potter's Wax Museum. In 1961 the building was moved to its present location and replicates the Worth House as it appeared in the mid-nineteenth Century.

There are three floors, all hardwood, with mid 19th century windows. As the visitor walks into the front door, there are tables for patrons on the left, and a lovely wooden bar sitting on the right. The kitchen is located right off this room. There is another large room off this front room, also used for dining. Between the two rooms, there is a central staircase leading up to the second floor, that at one time must have been where the bedrooms were located. It is now a lovely, open room, for diners. Somewhere on the second floor, there is a stairway up to the third floor, where the office is located.

The original structure was built in 1791 in the Spanish Colonial Style by prominent St. Augustine mover and shaker, Don Miguel YsNardy; a lovely home that was suitable for a successful merchant ship owner and ambitious building contractor. It proudly sat on the west side of Marine Street, where O.C. White's parking lot now is located. He lived there for only eight years. It was sold in 1799 and transformed into one of the first St. Augustine hotels. Various owners bought this now commercial property through the first half of the 1800s.

In the early 1850s, this hotel was bought by the widow of war hero and distinguished military man, General William Worth. Mrs. Margaret Worth renovated this hotel back into a private home, modernizing it to fit into the architecture of the time. When her husband had died of cholera in 1849 in Texas, she moved back to Florida, choosing St Augustine to start her life over as a single widow. The Worth family was originally from New York, but General Worth was stationed in Florida, before he was transferred to Texas.

Margaret must have loved her new home, and she lived there by herself for a time. Margaret's daughter, Mary, and her husband, Col. John T. Sprague, eventually moved in with Mrs. Worth, just after the ending of the Civil War, in 1865, probably to make sure she wasn't hassled by the reconstruction forces in charge of the city of St. Augustine.They lived with her until she died in 1869. The mansion remained in the Worth family until the turn-of-the-century. In 1904, a local cigar maker bought the property. In 1948, the structure was once again sold, this time to George L. Potter, whose claim to fame was being the "one time owner of Potter's Wax Museum". Perhaps his museum was located in the home itself.

Thirteen years later, in 1961, George Potter moved the entire structure, brick by brick to its current location, to the lot across the street. It now sits facing the bay, and there was room for a very nice patio/barbecue pit in front of the mansion. It was renovated back to its 1850s decorative style, when the Worth family lived there, probably losing the improvements made by the various owners of this structure, over the years.

In the early 1990s Dave White, a businessman, bought the Worth Mansion with the dream of opening up a fish restaurant and pub, and perhaps doing some remodeling so that the structure would better suit a restaurant. In a short time, he transformed the old Worth Mansion into a seafood restaurant. Just before he opened, a mysterious fire exploded in a waiter's storage closet that had nothing flammable stored there. Damage occurred on the second and third floor, as well as blowing out the windows on both floors. The investigation that followed couldn't find what caused the fire.

Mrs. Worth we believe haunts this restaurant. It is known in town as The Worth Mansion. She lived here in the late 1800s and we have copies of letters (courtesy of the Historical Library on Aviles Street) she wrote to her husband General Worth (Fort Worth, Texas-he's famous). The day we found the letters we also found this picture of Mrs. Worth with her son-in-law Colonel T. Sprague. Mrs. Worth passed away we presume in the home and The Worth Mansion passed down to her son-in-law as her daughter by law wasn't allowed to acquire property because she was a woman.

When our family first bought the building in the 1990s one night very late after the building was locked up we heard outside the office (used to be located in the back of the 2nd floor large party dining) footsteps walking across the second floor dining room and a man and woman having a conversation. The door opened to the balcony and shut. Immediately we opened the office door and thought surely someone got in. The balcony door was locked. We unlocked it then looked and no one was on it. Then searched the entire building and all doors and windows were locked. Little did we know that was only the start of it.

There are so many stories to tell but one more infamous story would be a picture that is in the St. Augustine Library. One day when OC himself was washing his hands in the men's bathroom, looked up in the mirror to see a man standing behind him with what he said was a tall top hat. He said excuse me and got out of the way and the man vanished. The doors are pretty heavy in the men's bathroom so there is no way that fast someone could disappear. For years we all thought it was an Abe Lincoln hat. When we showed him the picture he shouted, "That's him! That's him in the tall top hat!" Well that's a bowler hat we told him but nevertheless it is Colonel T. Sprague Mrs. Worth's son-in-law.