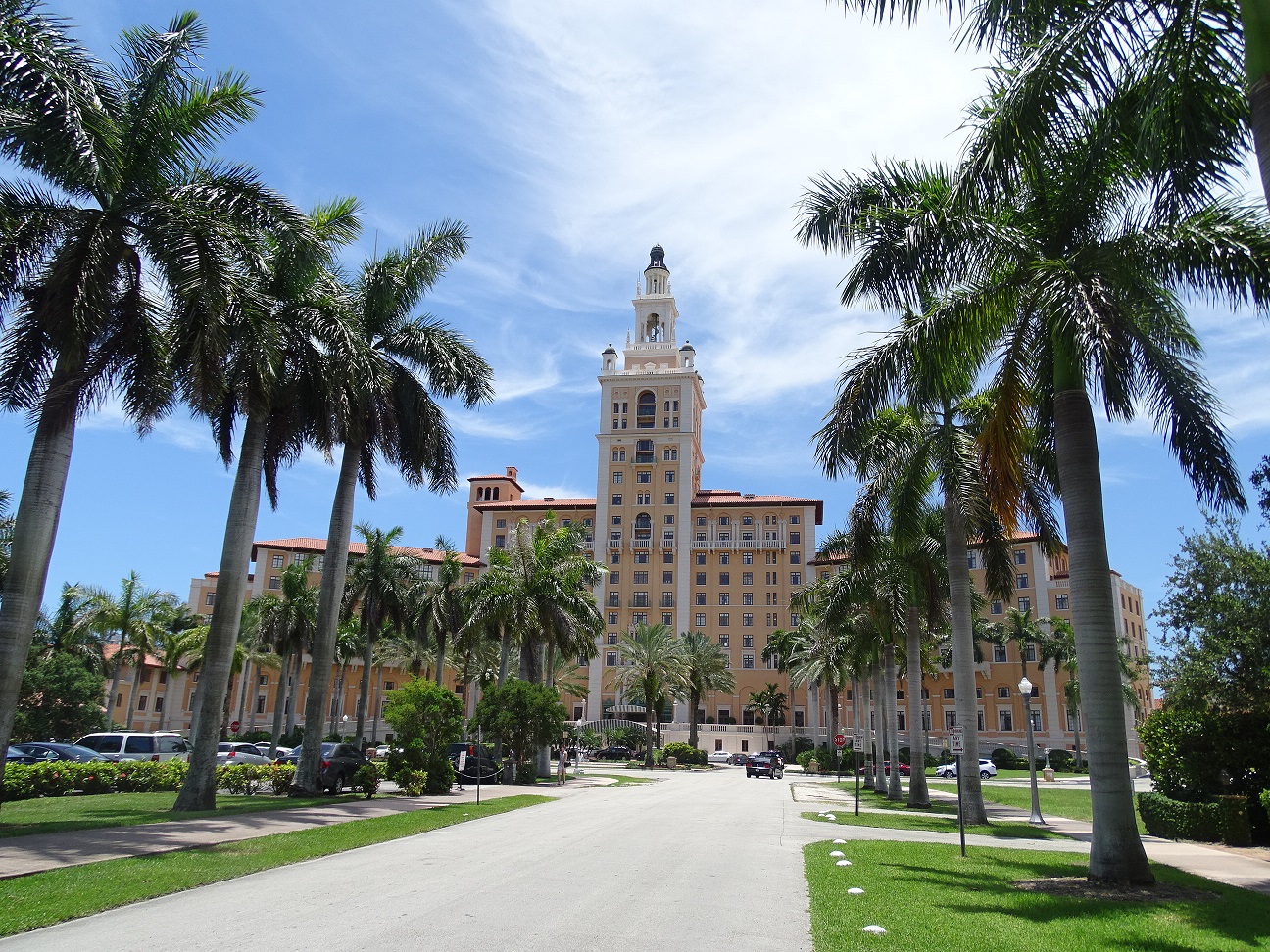 The Miami Biltmore Hotel is a luxury hotel in Coral Gables, Florida, United States. It was designed by Schultze and Weaver and was built in 1926 by John McEntee Bowman and George Merrick as part of the Biltmore hotel chain.

In 1925 land developer George E. Merrick joined forces with Biltmore hotel magnate John McEntee Bowman at the height of the Florida land boom to build "a great hotel...which would not only serve as a hostelry to the crowds which were thronging to Coral Gables but also would serve as a center of sports and fashion." In January 1926, ten months and $10 million later, the hotel debuted with a magnificent inaugural that brought people down from northern cities on trains marked "Miami Biltmore Specials."

Vistors included, the Duke and Duchess of Windsor, Ginger Rogers, Judy Garland, Bing Crosby, Al Capone and assorted Roosevelts and Vanderbilts as frequent guests. Franklin D. Roosevelt had a temporary White House office set up at the Hotel for when he vacationed on his fishing trips from Miami. There were many gala balls, aquatic shows by the grand pool and weddings were de rigueur as were world class golf tournaments.

See the source link for more history about this location.

During the ten years that the building was vacant; 1973-1983, people who were standing on the golf course behind the hotel, used to be able to see windows open and close by themselves, and mysterious lights seen in the windows.They also heard the sounds of music, coming from the hotel. Because the electricity was off inside the building, many thought that the spirits that remained there had taken up residence.

The officials thought that real people must be the real culprits, and appropriate action was planned.

Thinking that transients were trespassing and squatting in the hotel, the authorities sent in dogs and police to find the culprits, but came up empty-handed. The 14 police officers and 2 detectives did see paranormal activity, as their presence did scare the entities there. They heard breaking glass, witnessed the windows on the top floor open and close by themselves, and also saw phantom apparitions fleeing down the hallways. Their dogs also sensed entities, and ran out of the hotel.

Guests have been teased by entities who open and close doors, and play with the lights.

Guests have also awakened to see male entities dressed in hospital gowns looking at them. These shy entities have also been seen wandering the hallways, and disappear as soon as the living see them.

A transparent couple has been seen dancing in one of the ballrooms. They vanished into thin air, in front of living witnesses.

The Female Entity of the mother who died is known as "The Lady in White."

This sad entity lingers in some of the tower suites, wanders the halls, and sometimes sits on guests' beds. She has also been seen rushing around the balcony where she accidentally fell to her death, while saving her son.

The Male Entity of Thomas Fatty Welch - Described as being a jovial spirit, full of fun, and having a deep appreciation for a good Cuban cigar and women.

Fatty loves to wander the 13th floor, to help out in the elevators, to go to the restaurants, on occasion, and still likes the company of the living, especially women. He was so pleased that The Biltmore was restored to its former glory, that he is content to hang out there, spending his after-life in this hotel, getting some chuckles by playfully teasing the guests and staff, and is friendly and cooperative toward paranormal investigators and psychics.

He is thought to be the one who plays with the lights and doors and takes the lamp shades for chuckles!

Guests have heard his jovial chuckle, and witnessed the word, "BOO!", being printed by an unseen finger on fogged up mirrors in the bathrooms.

During an authorized paranormal investigation in the late '70s, he made his presence known in an EVP inadvertently recorded by investigators. He followed them around, breathing very heavily, ending the recording with a huge sigh.

His apparition has been seen in bathroom mirrors.

The Elevators in the hotel go to the 2-12th floors. To visit the 13th floor, a special key is used by the bellhop, because the suite there is used for special people, like Presidents, political leaders, rock stars, etc. Fatty does make exceptions for pretty women, and takes things into his own hands!

Couples going to their rooms on the floors below the 13th, via the elevator, have been taken to the 13th floor, passing the floor that they have pushed the button for, especially if the woman is pretty. Once there, the living have heard people talking & laughing, smelled cigar smoke, and felt a strong presence standing real close to them. Sometimes the elevator door shuts before the woman's male companion can get off, leaving his female partner alone with Fatty and friends!

Waitresses who are working in the restaurants, and have their hands full of plates, etc. have experienced the door to the dining area opening up for them, courtesy of Fatty.

One woman who was taken by Fatty to the 13th floor, via the elevator, was greeted with a cheery hello, from a "transparent" female entity, floating several feet above the floor.