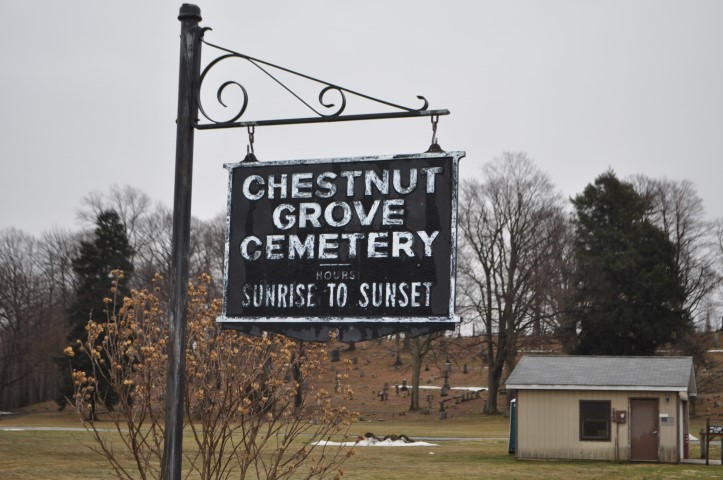 Ashtabula's Chestnut Grove Cemetery, located along the Ashtabula River near downtown, was originally an Indian burial site for members of the Erie tribe.

Ashtabula's Chestnut Grove Cemetery, located along the Ashtabula River near downtown, was originally an Indian burial site for members of the Erie tribe. Since 1819, the cemetery has accepted the remains of more than 18,000 souls, including 25 victims of the Ashtabula train disaster of 1876. For those unfamiliar with the train disaster: it occurred on a snowy night, December 29, 1876. The Pacific Express of the Lake Shore and Michigan Railway was making its way from Erie to Ashtabula when the bridge across the Ashtabula River failed and sent 11 rail cars tumbling 70 feet into the river, just 100 yards away from the Ashtabula station. It remains one of the worst train accidents in US history. Depending on the account, between 80 and 92 people perished from the fall, the cold and the fires that followed the crash. Sixty-four were injured. A distraught Charles Collins, the bridge's engineer died in January, 1877. Many believe he killed himself. A 70-foot obelisk at Chestnut Grove honors the victims of the train disaster. Collins is buried nearby. Many people have reported seeing men and women in late 19th century costume near the monument. Other reports site a man in period costume kneeling nearby saying "Im sorry." Chestnut Grove Cemetery is located at 79 Grove Drive in Ashtabula. The cemetery is open from dawn to dusk.

In the late 1800's, The "Lake Shore and Michigan Railroad Company" indulged in a joint venture with the popular Charles Collins, who was a great engineer and architect of the time, to create a bridge that would be used for railways. It was believed that by integrating a railroad system into the community, many opportunities could arise. Charles Collins liked the idea that they developed, however, he believed that it was nothing more than an "experimental" design that should not be implemented based on the technology of the time. High ranking officials went in with the company and pressed hard for Collins to approve the construction of the bridge. Against his better judgment, he eventually gave in to the surrounding pressure and allowed the construction to take place. There was another individual who worked closely with Collins, by the name of Amasa Stone who also agreed to the project, despite the fact that he felt the same way that Collins did.

In the cold, winter month of December in the year of 1876, a heavy and dangerous snowstorm occurred. With the snow pounding on the railroad and the bridge, it was under a tremendous strain. Then, to make matters worse, a train which was loaded with passengers traveling for business, as well as the holidays, came rolling across the unstable structure. It was then that the bridge cracked and collapsed into the creek that was below. Many individuals were pushed under the ice of the creek and met their fate due to hypothermia, while others received massive burns and died due to the fires ignited by various lamps, and even the coals that were used to power the massive locomotive. While there were a number of professional and civilians working to rescue the victims, it was a difficult process that the community was unable to handle, and many lives were lost.

The people who were found were placed in a single grave that held all of them in the Chestnut Grove Cemetery. Naturally, the public as well as the public officials and investigators placed Collins and Stone under investigation - calling it a crime, and attempting to hold them responsible for the deaths of all who were on the train who died. Collins was held accountable in front of a jury of investigators, gave his account, and mournfully left. The deaths weighed on his heart in an immense way. As he walked home, he decided right then that it was time to meet his fate. He returned to his home, got his gun, and shot himself in the head. Stone, some two weeks later, after undergoing the investigation and also being held accountable for the tragic accident, ended his life as well. Charles Collins was buried in the Chestnut Grove Cemetery near the victims of the accident, and it is believed that Amasa Stone is also buried there.

There are several different accounts of paranormal activity in this cemetery, which is why it is considered to be one of the most haunted cemeteries in Ohio. Many believe that they have seen the spirits of Collins and Stone walking the grounds, and looking out towards the area of the bridge in a sad way. There are others, however, that state that the spirits of the tragic train accident have made the most of their new position in the afterlife. Many report seeing and hearing children delightfully playing, men and women socializing, and even picnics taking place! If you are interested in visiting one of the most haunted cemeteries in Ohio and taking some ghost pictures, or capturing the seemingly happy victims enjoying their time in this haunted cemetery by doing ghost videos, the community welcomes you!