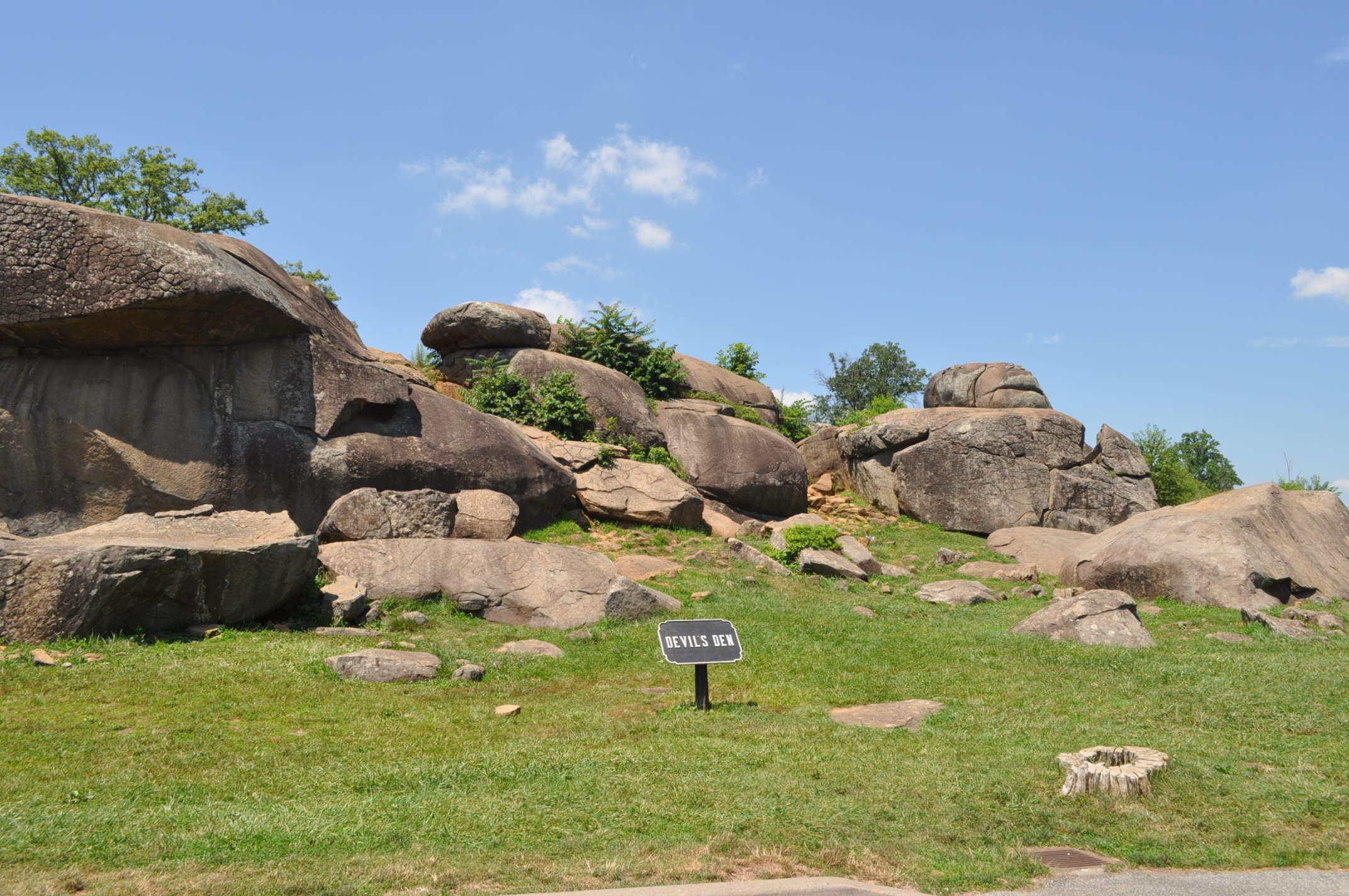 Devils Den is a boulder-strewn hill on the south end of Houck's Ridge at Gettysburg Battlefield, once used by artillery and infantry (e.g., sharpshooters) on the second day of the 1863 Battle of Gettysburg during the American Civil War.

Devils Den is a boulder-strewn hill on the south end of Houck's Ridge at Gettysburg Battlefield, once used by artillery and infantry (e.g., sharpshooters) on the second day of the 1863 Battle of Gettysburg during the American Civil War. A tourist attraction since the memorial association era, several boulders are worn from foot traffic and the site includes numerous cannon, memorials, and walkways, including a bridge spanning two boulders.

Devils Den was formed with Little Round Top (to the east-northeast) and Big Round Top (southwest) by pericardial frost wedging of the igneous land form formed 200 million years ago when a diabase sill intruded through the Triassic Gettysburg plain. The feature acquired its foreboding name prior to the 1863 battle. Throughout the mid-19th Century, local residents believed that the crevices between the boulders were home to a large snake. The size of the reptile varied between accounts, but reports ranged from 8 ft (2.4 m) to as large as 15 ft (4.6 m). The snake became known as "The Devil," and thus the area he was believed to inhabit became known as "The Devil's Den." Some soldier's accounts used the name "Devil's Cave", and a depression on a boulder that collects water resembles a flying horned bat.

The location of The Devil's Den is considered one of the many haunted hot spots on the Gettysburg Battlefield by both paranormal believers and skeptics alike. There have been several reports of malfunctioning cameras (exposed film), watches, and other electronic devices in the area. Sounds of disembodied footsteps, marching, cannon fire, galloping horses, and disembodied cries of soldiers who once lost their lives on this hallowed ground have been heard too many times to count. Apparitions have also been reportedly seen in this area of the battlefield, particularly the ghost of what is assumed to be a Texan soldier who "look[s] sort of like a hippie" long hair, ragged clothes, barefoot, big floppy hat, and also the spirit of a Union soldier who seems, at first, to be a reenactor from the NY regiment who enjoys posing for photos. The union soldier will pose as they did in those days, standing with his back straight, one hand across his lower torso and the other hand placed at his back. The photos are almost too perfect, but when they were developed the soldier does not appear in the photo.


The Devil's Den is arguably the most haunted spot in America. Today the boulders still hold marks from soldier foot traffic, and have been the sight of an innumerable amount of paranormal experiences. Groups visiting the den have witnessed soldiers dressed in civil war garb disappear into the darkness. Many people have heard the sound of cannon fire, running, and even screaming, only to find the area empty when they investigate.