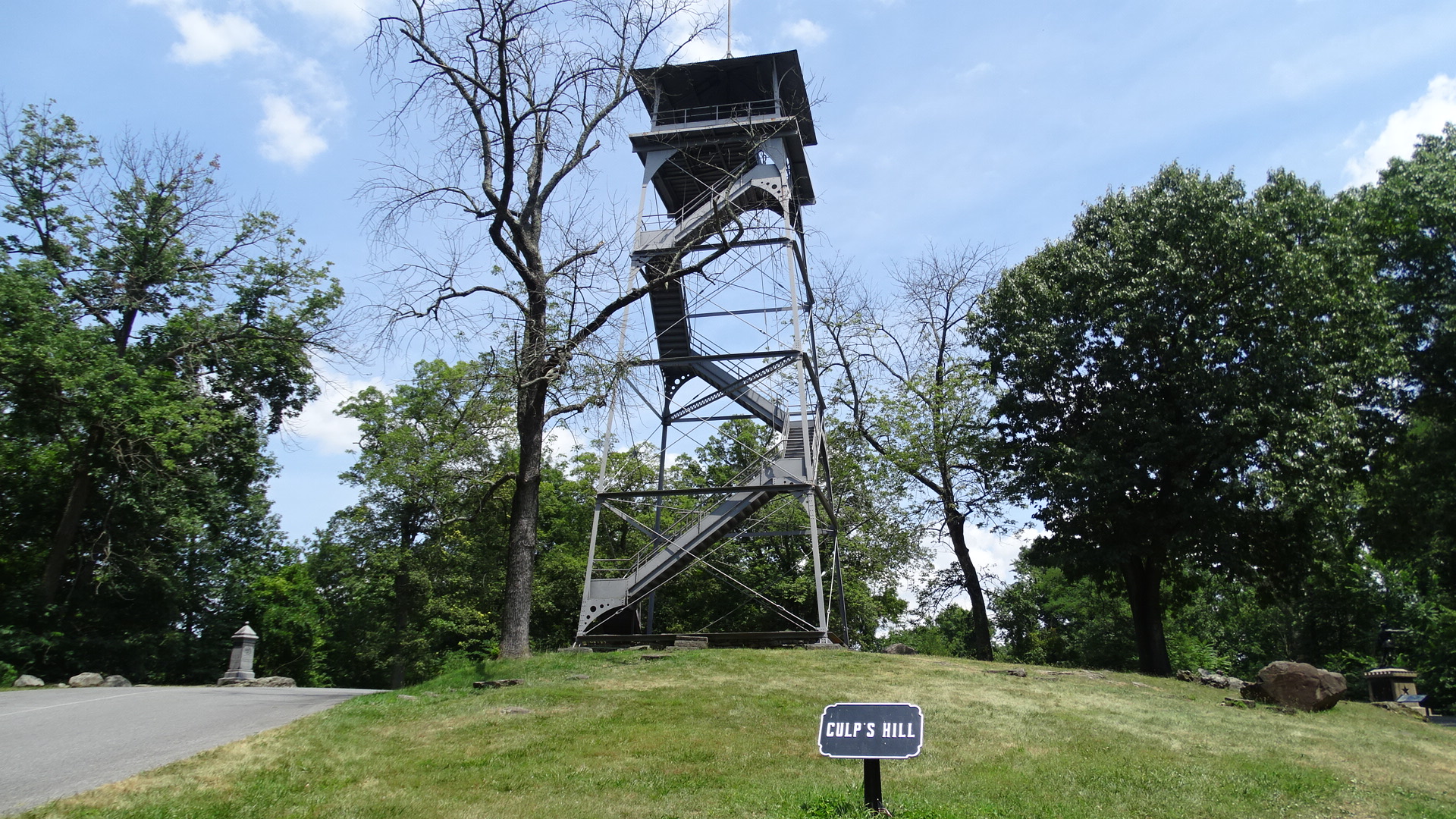 Culp's Hill is 0.75 mi (1.21 km) south of Gettysburg, Pennsylvania, which played a prominent role in the Battle of Gettysburg.

Culp's Hill is 0.75 mi (1.21 km) south of Gettysburg, Pennsylvania, which played a prominent role in the Battle of Gettysburg. It consists of two rounded peaks, separated by a narrow saddle. Its heavily wooded higher peak is 630 ft (190 m) above sea level. The lower peak is about 100 feet (30 m) shorter than its companion. The eastern slope descends to Rock Creek, about 160 feet (50 m) lower in elevation, and the western slope is to a saddle with Stevens Knoll (formerly McKnight's Hill) with a summit 100 ft (30 m) lower than the main Culp's Hill summit. The hill was owned in 1863 by farmer Henry Culp and was publicized as "Culp's Hill" by October 31, 1865.

During the Battle of Gettysburg, July 1–3, 1863, Culp's Hill was a critical part of the Union Army defensive line, the principal feature of the right flank, or "barbed" portion of what is described as the "fish-hook" line. Holding the hill was by itself unimportant because its heavily wooded sides made it unsuitable for artillery placement, but its loss would have been catastrophic to the Union army. It dominated Cemetery Hill and the Baltimore Pike, the latter being critical for keeping the Union army supplied and for blocking any Confederate advance on Baltimore or Washington, D.C.


Today the summit of the hill is topped with an observation tower and several Union monuments and markers, including a statue of Brigadier General George Greene. A small parking area loops around the summit. The tower is one of five put up in the 1890's by the War Department, three of which still exist today. The sixty foot tower rises above the tall oak trees on the summit of the hill, giving a beautiful 360 degree view of the battlefield.

A visit to Culp's Hill in modern-day times results in creepy feelings of animosity. It's as if those men are still fighting and dying on that hill. Some people have recorded interesting EVPs that sound similar to the wartime calls of advance and retreat. Others have claimed to hear cannon fire or to see soldiers running through the woods. Some visitors report hearing disembodied footsteps following them up the observation tower. The most tragic haunting reported in this area, however, is the smell of peppermint and vanilla, which soldiers used to stifle the smell of the rotting flesh of those who were wounded in battle.