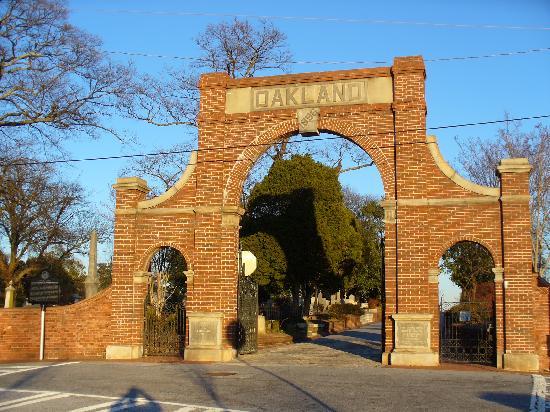 City fathers purchased six acres in 1850 to be a public burial ground for a young but fast-growing town that already had a population of more than 2,500.

City fathers purchased six acres in 1850 to be a public burial ground for a young but fast-growing town that already had a population of more than 2,500. It was designed as a rural garden cemetery, a 19th Century innovation conceived as an alternative to traditional graveyards which often were crowded and aesthetically unappealing.

Originally called Atlanta Graveyard or City Burial Place, Oakland was renamed in 1872. By then it had expanded to 48 acres, mainly due to pressures of the Civil War. During the war, the City and the Confederate government added land to bury soldiers who died in local hospitals. As fighting drew closer and engulfed Atlanta, more burial space was needed. After the war, space was added to provide a proper final resting place for soldiers who had been hastily buried on area battlefields. By 1867 the cemetery reached its present size.

Two historical markers within Oakland describe its connections with momentous events of the Civil War.

- In 1862, Union operatives known as Andrews Raiders commandeered a locomotive at present-day Kennesaw and raced north to cut telegraph lines. They were captured and condemned as spies. Seven were hanged near Oakland's southeast corner and interred in the cemetery before removal to the National Cemetery at Chattanooga.

- On high ground north of the Bell Tower, a two-story farmhouse stood in the summer of 1864. It served as headquarters for Confederate commander John B. Hood during the Battle of Atlanta, which was fought to the east of the cemetery on July 22.

In the late 19th Century, Oakland was a popular destination for Sunday carriage rides and picnics. Families tended the plots of loved ones, creating an assortment of lovely gardens. Atlanta's first greenhouse was established here in 1870. Many distinctions of daily life were maintained in death, as African Americans were buried apart from whites and Jewish sections were separate from Christian.

As the 20th Century unfolded, Oakland increasingly was surrounded by residential and industrial development. The cemetery also was filling up. The last sites were sold in 1884. With the passage of time, many graves went unattended as descendents moved away or lost touch with their antecedents. Oakland fell into serious disrepair from neglect and occasional vandalism.

In 1976, Oakland was placed on the National Register of Historic Places and the Historic Oakland Foundation was founded. The City and the Foundation have worked together to stabilize the cemetery and make it an attractive and inviting place for all Atlantans.

The Foundation is currently in the process of implementing a ten-phase restoration and gardens renovation plan for the entire cemetery. The plan is contingent on the acquisition of sufficient funding.

The vision of the Foundation: A revered cemetery and vibrant park to honor Atlanta's past and celebrate its future.

Foundation Mission: The Historic Oakland Foundation partners with the City of Atlanta to preserve, restore, enhance, and share Oakland Cemetery with the public as an important cultural resource and as an island of tranquility in the heart of the city.

Blair Underwood entered the cemetery one day to lay flowers on his grandfather's grave and pray. Hurried by a threatening storm, Underwood turned to leave and saw a man lying on the ground who was apparently asleep. They young man walked quietly across the grounds, trying not to disturb the figure, but closer, he "saw blood literally pouring out of his chest." Realizing the wound might prove fatal, Underwood ran toward the man to offer assistance. Suddenly, his eyes popped open, and his head turned toward Underwood, revealing not eyes but empty hollows: "He had no eyes!" The prostrate figure turned away from Underwood and disappeared. Underwood declared this the most horrible sight of his life. Reflecting on the time of the incident, Underwood shuttered to think what might happen at Oakland at night.


An elderly woman showed Behrend a letter her great grandmother wrote to her grandmother in 1891. The account related what she called a "vision, so disturbing" she could not get out of her mind and would only tell her daughter lest people "believe me insane." After laying a wreath on the grave of her uncle Andrew, "I witnessed a man hanging from a tree." The figure was wearing "the style of the war, " and she believed he was a "Yankee." She looked away from the terrible sight and spent several minutes composing herself. Finally looking up the spirit had vanished.


At the end of workday, Devin Kuharic, a gardener at Oakland, was starting his car when it quickly honked its own horn four times. That had never occurred before, nor did it ever occur afterward. Years later, driving a new car, Kuharic gave a friend a tour, and as he started the vehicle to leave, "the horn in that car honked four times by itself," he told William Bender. Again, such a thing never occurred again.