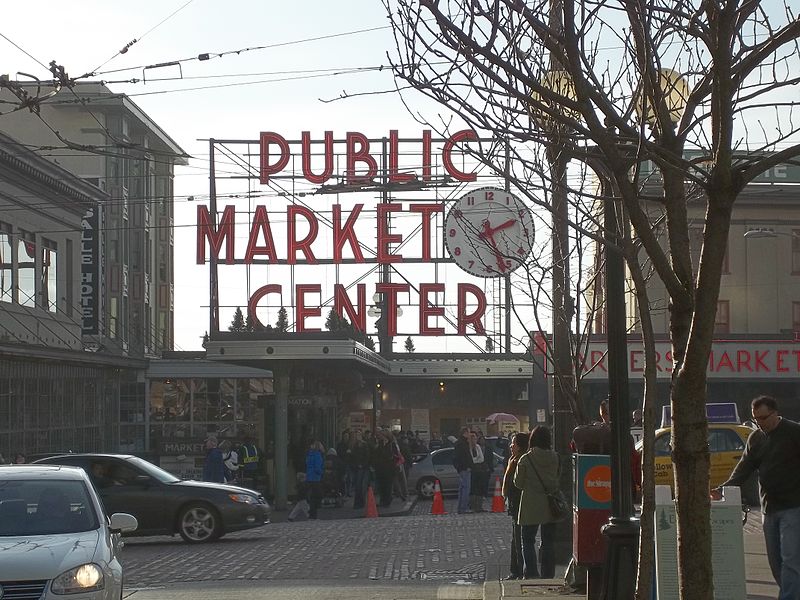 At the turn of the century, Seattle was a rough and tumble place and a rapidly growing city. As the population of gold rushers, loggers, fishermen, shipbuilders and merchants grew, so did the demand for produce and goods from the city's neighboring farms. In the decade of 1890-1900, Seattle's population nearly doubled, growing from 42,000 to 80,000 citizens.

Farmers brought their vegetables, fruit, milk, dairy, eggs and meat to the city by horse drawn wagons and by ferry from the nearby islands. The goods were purchases by wholesalers, who sold the goods at a commission at warehouses on Western Ave. In this system, farmers occasionally made a profit but increasingly only broke even or lost money.

In 1906-1907, the price of produce-onions namely-soared, leaving the farmers none the richer and the citizens angry over the price gouging. The uproar led one local official to try to find a solution. In the summer of 1907, Seattle City Councilman Thomas Revelle proposed the city create a public market place where farmers and consumers could meet directly to sell and buy goods and thereby sidelining the wholesalers.

On the public market's first day, August 17, 1907, crowds of shoppers seeking fresh produce and bargains descended upon the new marketplace. The first farmer sold out of produce within minutes. Within a week, 70 wagons were gathering daily to sell along the newly named Pike Place, a wooden roadway that connected First St. to Western Ave.

"The Market is yours. I dedicate it to you and may it prove of benefit to you and your children. It is for you to protect, defend, and uphold and it is for you to see that those who occupy it treat you fairly. . This is one of the greatest days in the history of Seattle."

Developer Frank Goodwin, who had recently returned with a small fortune from the Klondike Gold Rush, saw an opportunity in the flourishing market and began construction of the permanent arcades that make up the heart of today's Market. The Market prospered during the 1920s and 1930s, and was home to a lively mix of Japanese and Italian American farmers, struggling artists, political radicals, and eccentrics.

Italian farmer Joe Desimone purchased the Market's main arcades in 1941 and guided it through World War II, when 1st Avenue attracted thousands of sailors and soldiers along with ration-book bargain hunters. As suburbs and supermarkets sprouted after World War II, the Market fell on hard times, while still supporting an eclectic community of artists and craftspeople.

When the maze of aging buildings was slated for demolition in the 1960s, architect Victor Steinbrueck rallied Seattle to "Save the Market." Voters approved a 17-acre historic district on November 2, 1971, and the City of Seattle later established the Pike Place Market Preservation and Development Authority to rehabilitate and manage the Market's core buildings. 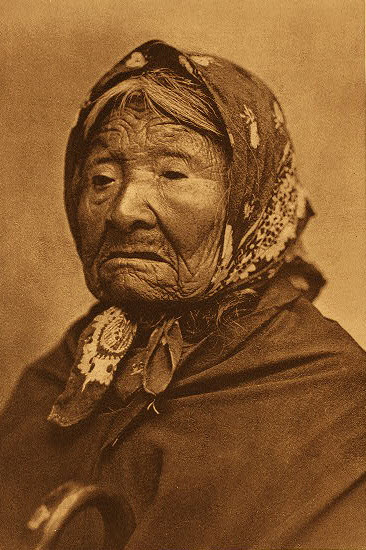 When Seattle saved The Pike Place Market, the people also continued to provide the ghosts who haunt the buildings and area a place to exist. All are well-behaved, gentle entities.

An Apparition of an Indian woman; Described as being bent and wrinkled wearing a red handkerchief as a head covering and a shawl around her shoulders. When still alive, a photographer became interested in her and took many pictures of her, which helps people now identify this entity.

Chief Seattle's eldest daughter, named Kickisomlo, was called Princess Angeline by her white friends. In 1855, when the Duwamish Indians were told to leave Seattle and go to a reservation, she told them to go pound sand, and she stayed, making her home in a waterfront cabin, between Pike and Pine Streets. She made her living doing laundry for people and selling her hand-woven baskets to the people of Seattle, who appreciated her very much.

When she died in 1896 at the age of 85 on May 31, 1896, the people of Seattle gave her a fine funeral at Our Lady of Good Help and buried her in a coffin in the shape of a canoe at Lake View Cemetery on Capitol Hill.

Her father predicted that long after the Indians disappear from Seattle, the descendants of the white people will not be alone; the spirits of Duwamish will be with them. Spirits can come back and aren't governed by treaties.

Princess Angeline has been seen going about her business, trekking up and down the underground ramps of this shopping plaza. She is carrying a large amount of baskets to sell. She also seems to like to window shop as well.

She was once seen at a Wedding in one of the market's restaurants. She was standing in her white blanket with the wedding party. The father of the bride asked her to leave and as he did, she disappeared.

Every three months since 1982, she has startled employees at the Craft Emporium, the old Goodwill Store building, the Sound View Cafe and the book store located in this shopping plaza, formerly known as Shakespeare & Company Bookstore. She appears as a solid form, looking very much like a real person. If the living look close enough, her transparency is evident. She seems to glide along, always looking straight ahead but must get her chuckles by either melting into the air in front of the living; or simply gliding right through a wall!

She was Lois Browna regular and eccentric of the Market until she died in 1995 due to a fire. Before she died, she was given the nickname "Mae West" and title "Market Queen" and even had May 18 declared Mae West Day by the Mayor in 1994. She would alway roam around the market (wearing and making crude comments to men like "One leg is Christmas, the other is Thanksgiving...visit me sometime between the holidays.' and she would take her time to work some of the shops so people could take breaks. Her last request of the requested that her remains be scattered at the market. They were placed at the base of a Plum tree that was originally planted by...Princess angeline to mark the native american burial grounds on the original hillside. Anyways, after the ashes were scattered there...the tree began to bear fruit again after many years of being baron. The tree was removed in 2007...under it were found several other containers of cremated remains. After the trees removal...Mae West's ghost has been seen in the arcades, behind pillars and is claimed to say "Boo".

There are several locations that have ghosts of children in the market. 5 of them are associated with an area called the ramp (It is an old horse ramp) on the third level of the down under. One of them is a young blonde girl who seems to help lost children. She leads them back to their parents. Another is a young boy who has brown hair, but no eyes...some others are thought to be responsible for breaking a glass case in shop 319 holding doll furniture and neatly arranging the pieces--owner had doors locked and there was no evidence of a break in. Other children's laughter and running can be heard at night and EVP's have been recorded saying" I want to catch him".

Another shop #415 has a ghost child Jacob. There used to be a bead shop in that storefront unit. They moved in 2010). He seems to like playing with beads. The owner would organize them, go home, come back the next day and they would be jumbled up and disorganized. Beaded necklaces would get thrown (even on request). Really interesting is that there was a secret room closed off in 1973 after the post office closed in that unit. The owners noticed one day that there were 3 windows inside their unit, but 6 windows outside..so they knocked on the wall, found it was hollow and broke a hole in the wall. On the other side were the extra 3 windows...and below the windows were small piles---beads,pennies, and packets of beads that they had gotten in the week before...that were marked with their own handwriting on them.did Jacob do it? (The new shop owners have an area set-up just for Jacob called Jacob's room.)

So why the children? Two reasons.

1. A descendant of the old Butterworth Mortuary Butterworths (Butterworth building today adjacent to the market) explained that there were shelves of unnamed (just numbered) urns of those who died during the 1918-19 Spanish flu- in the basement that were found while cleaning it out. as many as 1500 were unidentified of the 3500 who died of the flu. During the pandemic, hotels in the vicinity of the market were set up as quarantine areas where families could send children so as not to infect the whole family. Legend is that the children are victims of the flu pandemic who might not have been identified.

2. Kids used to work at the market. They used to help customers carry their purchases. They are even seen in a 1927 film by showing the Market.

Frank Goodwin, developer of the original Pike Place Market had a nephew who now likes to haunt the market. Arthur Goodwin helped his uncle in the development and held a job as the market director from 1918-1941. It was common practice for Arthur to be spotted watching over the workers in the market or greeting customers at the door. Some believe he still watches over the market and can be seen looking out from his old office window. He is also known to introduce himself and greet customers as he would have while he was alive.

The famed Gum wall is actually the outside wall of the Market theater.

There seem to be several ghosts that inhabit the area:

During rehearsals, the piano will play on its own--not actual songs...just a few of the keys. Male and female ghosts have been recorded arguing in the light booth.

A ghost of a man in a bowler hat has been seen walking from the North end of the building and out of the door. EVP's of the theater have produced names of actors of the theater and "I love you."

5 seats are always reserved for the spirits of the building for all productions.