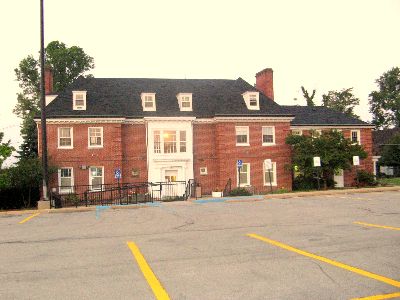 The wealthy couple didn't have long to enjoy their new digs. In 1912, the Wicks booked a cabin aboard the Titanic. Mollie was saved after the unsinkable liner sank; the Colonel went down with the ship.

Mollie returned to her Youngstown mansion, never to remarry. After she joined George in the afterlife, the house was sold to the Wellers. In the 1980's, YSU bought the property and turned it into dorms known as the Wick House.

Ghosts of the Rust Belt, Part I
By: Brian Harclerode

Youngstown is no stranger to tragedy.

Our city has seen its fair share of horrors and been through enough lows that sometimes we forget what the highs looked like. That kind of experience leaves a mark. Like a deep gash leaves a scar, tragedy leaves a reminder. Whether it happens to be a cross made of flowers marking an intersection that played a role in the death of a loved one or the rusted out husk of a building that once housed a vibrant business, our city is full of these reminders, these ghosts.

It should be no surprise that our city also plays host to other specters and reminders of the past. Youngstown is full of ghosts and haunts. Most of them are right under your nose, if not at least walking distance from where you're reading this right now

A perfect example is the Wick House at Youngstown State University.

The mansion was built in 1906 by a man named Colonel George Dennick Wick. Wick was a very well to do man, having made his money in coal, iron and steel at the beginning of the twentieth century. He partnered with James A. Campbell (namesake of Youngstown's neighboring city) to form the Youngstown Sheet and Tube Company which went on to become the fifth largest steel company in the nation. The company also went on to take part in what became known as the Steel Seizure Case, a case that eventually lead the Supreme Court to limit the amount of time a president can spend in office.

Business was going very well for Mr. Wick but his health had taken a turn for the worse. Hoping to cure his ailments, he and his family decided to take a European tour. In April of 1912 it was time for the Wicks to return home and for Mr. Wick to get back to work. On April 12th, 1912 Mr. Wick and his family boarded the RMS Titanic bound for New York. Of the five family members aboard the doomed vessel, only Mrs. Mollie Wick (wife) and Caroline Bonnell (a cousin) survived.

Mollie Wick returned to Youngstown. Reports say that Mollie never gave up hope that Mr. Wick would return, having herself miraculously survived the tragedy of The Titanic. It is reported that Mollie would sit in the foyer of the Wick House with the main door open, waiting for George to return. Or that she would leave the blinds open so she could be the first to see him return home. It's unclear if Mollie lived out her days at the Wick House or sold it to another family (who then sold it to YSU) shortly before her death.

Mollie may no longer own The Wick House, but some say she still drops by on occasion. When Wick House was a residential dorm for YSU, residents would report an odd feeling of sadness on the second and third floors. Staff also told accounts of the main door opening and blinds coming up for no reason. Relating to the tales of Mollie waiting for Mr. Wick to return, a maintenance worker at YSU tells an account of getting a call from the Wick House about a flickering lamp. The bulb had been replaced and the lamp continued to flicker. The lamp was moved and plugged into another socket and the flickering stopped. The maintenance worker figured something was wrong with the particular wall socket. Testing the socket only proved it to be working fine. The worker figured the lamp to have faulty wiring and proceeded to take it from Wick House to the maintenance department to fix it. No sooner did the worker get to the lobby when the light began to flicker again. It was obvious by now that neither the bulb nor the wiring were the problem. The worker left with the lamp, threw it into the nearest dumpster and returned the next day to the Wick House with a new lamp. Nothing further could be found regarding the lamp. However, accounts by students (remember, the building was once student housing) place an "ethereal female" roaming the lobby late at night and a chandelier in the main lobby rocking back and forth of its own accord.

The dorm has since been converted to YSU's Disability Services Center and the claims of paranormal activity have decreased in the past years. However, the occasion reports of strange activity still come in to local agencies regarding the house. When the new occupants set up shop in the old dorm, one staff member refuse to have her office located on the second floor because of an "odd, sad, hairs-crawling-up-the-back-of-your-neck" feeling.

Tragedy followed Mr. Wick even after death. The Campbell Works was the home plant for Youngstown Steel and Tube. Four years after his death, Mr. Wick's former employees rioted at the home plant in regard to a strike over working conditions. The ensuing chaos resulted in the demolition of the smaller cities' business districts; they were burnt to the ground. The rioting was subdued by National Guard troops and East Youngstown was renamed Campbell, in honor of James A. Campbell.

To this day there are still reports of strange activity where the old plant stood. Even in the daylight it's an eerie area. The area today is grey with a decayed feel to it, like someone left in a hurry and left their old life behind.

With the history we have, it is not hard to imagine those "reminders" haunting our grounds to this day.

Weird stuff happened there, as witnessed by the students. The front door would open itself, blinds would roll up the window panes, and the lights would flash on and off. The staff even unplugged the lights, but they still burned bright. People experienced an uneasy, eerie feeling in the old Mansion, especially at night. And no wonder.

Rumors were that Mollie was still in the building. One resident accused her of stealing her socks - we suppose even spooks get cold feet - and several students reported seeing an etheral female haunting the lobby.

Once, YSU workers saw a face staring at them from the second floor window, where Mollie and one of her daughters had passed away.