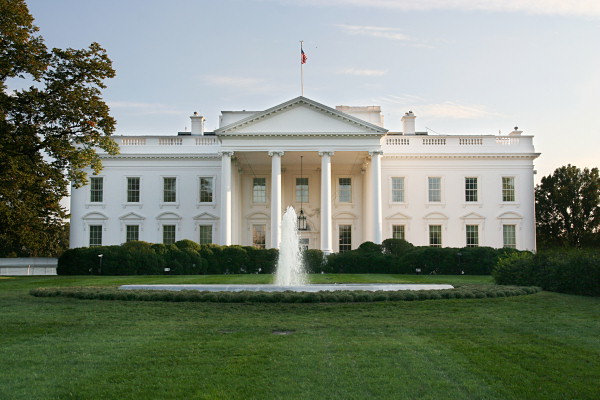 The presidential mansion was designed by James Hoban and personally approved by George Washington. The mansion would be situated on the angled Pennsylvania Avenue at the 1600 block, down the street from the Capitol building.

Construction of the White House was was begun on October 13, 1792, with Washington overseeing the laying of the cornerstone. He never lived to see it complete, however, as construction was slow.

Second President of the United States John Adams became the first chief executive to take residence in the building now called the Residence on November 1, 1800, while it was still unfinished.

The north and south porticos were not part of the structure for three decades. In 1835, running water and central heating were installed. In 1848, gaslight was installed. Covered pavilions and then large greenhouses for growing flowers and vegetables were constructed on either side of the mansion. Victorian ornamentation and decor were added from the 1870s to the 1890s.

Electric lights supplemented gaslights in 1891, and the first electric elevator was added in 1898. In 1902, Theodore Roosevelt removed the Victorian ornamentation and restored the mansion to the federal style with Georgian touches. A new roof and third floor were added in 1927. In 1949, after adding a balcony on the south side, Harry Truman's engineers found the rest of the house to be unsound and completely rebuilt the interior, even digging sub-basements. The Kennedys remodeled extensively in the early 1960s and occasional renovations continue today. The West Wing

Before the building of the West Wing, presidential staff worked on the second floor of the Residence. However, when Theodore Roosevelt became president, he realized that the rooms in the mansion were too small for his large family and his staff. In 1902, he had a temporary office structure constructed on the site of the greenhouses.

In 1909, William Howard Taft expanded the building and created an oval office for the president. In 1923 is was remodeled; in 1930 it was rebuilt after a Christmas fire. In 1934, Franklin Roosevelt had a second floor constructed and moved the Oval Office to the southeast corner for better light and privacy. He also had a swimming pool and gymnasium constructed in the gallery to allow him to exercise regularly.

Many presidents renovate the Oval Office and Cabinet Room. Richard Nixon converted the pool and gym to a briefing room and offices for the press. He also dedicated the conference room to Theodore and Franklin Roosevelt. In 2006, the George W Bush renovated the press areas and enlarged and updated the Situation Room. East Wing

Along with the West Wing, Theodore Roosevelt also built an early, one-story East Wing as a formal guest entrance. The present East Wing was added to the White House in 1942 in part to balance the enlarged West Wing and in part to cover the construction of an underground air-raid bunker now known as the Presidential Emergency Operations Center. Among its uses, the East Wing has sometimes housed the offices and staff of the first lady and provides a covered entrance to the White House that allows guests to easily flow through the mansion for large social events.

Abigail Adams and her husband John, the second president of the United States (1797-1801), moved to 1600 Pennsylvania Avenue from the former U.S. capital in Philadelphia. At the time, Washington, D.C. was still just a town, built mostly on swampy land on the banks of the Potomac River. Because the East Room of the new White House was the warmest and driest, Abigail used it to hang the wash. Her ghost, clad in a cap and lace shawl, has reportedly been seen heading towards the East Room, arms outstretched as if carrying laundry.

A lesser-known early White House personality who has been said to haunt its halls was David Burns, who sold the government most of the land on which the city of Washington--including the presidential residence--was built. Lillian Rogers Parks, a seamstress who chronicled her 30-year career working at the White House in a 1961 memoir, told the story of a valet to President Franklin D. Roosevelt who reportedly heard a disembodied voice coming from a distance in the Yellow Oval Room, saying "I'm Mr. Burns." During Harry S. Truman's administration, a guard heard a similar voice; thinking it was then-Secretary of State James Byrnes, he went looking for him, only to learn that the secretary hadn't been at the White House that day. Andrew Jackson & Harry Truman's Ghosts

In 1824, Andrew "Old Hickory" Jackson was defeated by John Quincy Adams in one of the most contentious presidential elections in history. Elected president four years later, the surly Jackson continued to hold grudges against those who had supported his opponent. In the early 1860s, First Lady Mary Todd Lincoln--who believed strongly in the occult, and reportedly held séances in the White House to commune with the spirits of her dead sons--told friends she had heard Jackson stomping and swearing through the halls of the presidential residence. The Rose Room, Jackson's bedchamber while he was president, is believed by some to be one of the most haunted rooms in the White House.

Jackson's ghostly presence also showed up in the White House correspondence of Harry Truman, America's 33rd president. In June 1945, just two months into his first term, Truman wrote to his wife Bess of the spooky quality of his new residence: "I sit here in this old house and work on foreign affairs, read reports, and work on speeches--all the while listening to the ghosts walk up and down the hallway and even right in here in the study. The floors pop and the drapes move back and forth--I can just imagine old Andy [Jackson] and Teddy [Roosevelt] having an argument over Franklin [Roosevelt]." Abraham Lincoln

By far the most frequently reported sighting in the White House over the years has been the ghost--or at least the presence--of the celebrated 16th president, Abraham Lincoln, whose life was cut tragically short by an assassin's bullet in April 1865. Grace Coolidge, wife of President Calvin Coolidge (1923-29), was the first person to say she had actually seen Lincoln's ghost. According to her, the lanky former president was standing looking out a window of the Oval Office, across the Potomac to the former Civil War battlefields beyond. Lady Bird Johnson, wife of President Lyndon Johnson (1963-69), reportedly felt Lincoln's presence one night while watching a television program about his death.

Most notably, sightings of Lincoln's ghost were frequently reported during the long administration of Franklin D. Roosevelt (1933-45), who also presided over his country during a time of great upheaval. First Lady Eleanor Roosevelt used the Lincoln Bedroom as her study, and said she would feel his presence when she worked there late at night. During her visit to the White House, Queen Wilhelmina of the Netherlands heard a knock on her bedroom door in the night; when she answered it, she reportedly saw Lincoln's ghost, wearing his top hat, and fainted dead away. British Prime Minister Winston Churchill, who visited the White House more than once during World War II, told a story of emerging naked from his evening bath smoking his customary cigar, only to find a ghostly Lincoln sitting by the fireplace in his room.

When Lillian Rogers Parks, the seamstress, once investigated the sound of someone pacing an upper level of the White House, another staff member told her the room in question had been unoccupied, and "that was old Abe pacing the floor." Psychics have speculated that Lincoln's spirit remains in the White House to be on hand in times of crisis, as well as to complete the difficult work that his untimely death left unfinished.