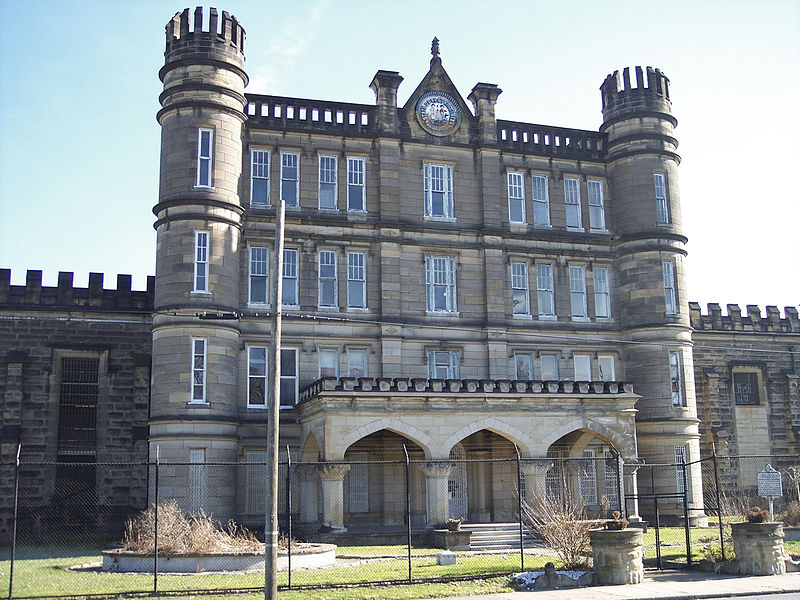 The prison at Joliet provided the prototype for the West Virginia Penitentiary. It was an imposing stone structure fashioned in the castellated Gothic architectural style (adorned with turrets and battlements, like a castle).

The prison at Joliet provided the prototype for the West Virginia Penitentiary. It was an imposing stone structure fashioned in the castellated Gothic architectural style (adorned with turrets and battlements, like a castle). Only the dimensions of West Virginia's facility would differ; it would be approximately one-half the size of Joliet.

No architectural drawings of the West Virginia Penitentiary have been discovered, so an understanding of the plan developed by the Board of Directors must be obtained through their 1867 report, which details the procurement of a title for ten acres of land and a proposal to enclose about seven acres. On the north side would be a street 60 feet in width, and on the west 140 feet for street and yard to the front buildings.

The prison yard would be a parallelogram 682 1/2 feet in length, by 352 1/2 feet in width, enclosed by a stone wall 5 feet in thickness at the bottom, 2 1/2 feet at the top, with foundation 5 feet below the surface, and wall 25 inches thick. At each of the corners of this wall would be large turrets, for the use of the guards, with inside staircases. Guardrooms would be above on a level with the top of the main. The superintendent's house and cell buildings would be so placed that the rear wall of each would form part of the west wall.

The West Virginia Penitentiary (Moundsville), with its striking stone facade and Gothic castle-like style opened in 1876. The structure was originally built for 480 prisoners, but by the early 1930s it housed a total of 2,400. At times, three prisoners would be assigned to one of the tiny five by seven cells.

In 1929, construction to expand the prison began, but because of the shortage of iron due to the war, it was not completed until 1959. In 1986, the West Virginia Supreme Court ruled the small cells were cruel and unusual punishment and ordered the prison to be closed. In 1995, the last prisoners were transferred out of Moundsville.

In the late 1800s Moundsville took over all executions for the state. In all, 85 men were hung and nine electrocuted. The executions were only a small part of the violent past at Moundsville. Suicide, murder and violent punishments contributed to the death of hundreds of inmates. Because of poor record keeping, the exact number of inmates who died violent deaths while incarcerated at Moundsville is unknown.

In 1886, prison officials were exposed for hiding whips and other items, used to punish incorrigibles, from the state inspectors. But after one of the superintendent's resigned from the prison, he did a "tell all" interview with The Enquirer, exposing the violence and torture on inmates by prison officials. The following are excerpts from the interview describing the atrocities:

"It is an instrument invented and built in the prison. It is made somewhat in the shape of a quarter-circle, with the highest end about three or four feet above the platform upon which it is set. The prisoner is stripped naked and bend over upon the machine. His feet are fastened to the floor with ropes, while his hands, which are stretched over the upper end, are tied with roped attached to small blocks, by which a tension so strong that the frame of the prisoner can almost be torn in two can be made with a slight pull.

After the prisoner is placed in position the Superintendent, or whoever does the whipping, takes a heavy whip, made of sole leather, two pieces of which, about three feet long, are sewed together and the ends scraped slightly rounding, the lash being three inches broad at the handle, tapering to a point. With the whip the prisoner is beaten until he is almost dead, or the strength of the man who is doing the whipping gives out."

"That infernal 'kicking Jenny' was not the only instrument of torture. There was the 'shoo-fly,' an instrument so arranged that the victim could be placed with his feet in the stocks, his arms pinioned and his head fastened so that he could not move it. Then someone would take the hose and turn the water full upon the prisoner's face. This was kept up until the victim was partly strangled to death.

Imagine a man receiving a stream of water from an inch nozzle full in the face without the power of changing his position; then think of that stream being ice-cold water, and you can form an idea." According to popular legend, the prison buildings were built on an old Native American burial ground. Some believe that the legend coupled with its violent past is why it is haunted.

With its violent past, deplorable conditions and two major riots, Moundsville Penitentiary is a popular destination for those who study paranormal activity. Some claim that the prison is plagued with what is called, residual haunting, which are defined as a replay of a tragic event from the past. There are several areas in the prison known as "hot spots" where an unusual amount of paranormal activity reportedly occurs. Such places include: the Chapel, shower cages, Death Row, the Sugar Shack, which was a recreational area and the North Wagon Gate which is where death row inmates were taken to be hung before the facility used the electric chair.

One other area known for strange occurrences is the circular entrance gate which was used to separate arriving inmates from the warden's living quarters. According to reports, the circular cage turns periodically by itself, giving the impression that the spirits of criminals are still arriving at the prison.