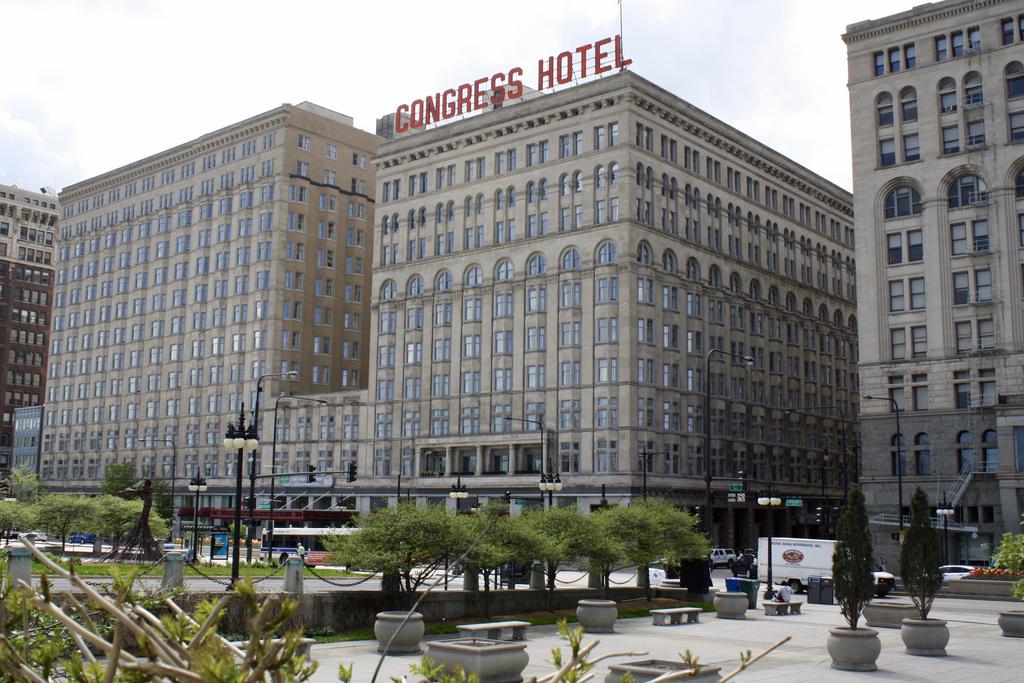 Originally constructed in 1893, the Congress Plaza Hotel featured cobbled streets, gaslights, and horse drawn carriages. The hotel was originally called the Auditorium Annex when it opened to house the throngs of visitors to the World's Colombian Expositi

Originally constructed in 1893, the Congress Plaza Hotel featured cobbled streets, gaslights, and horse drawn carriages. The hotel was originally called the Auditorium Annex when it opened to house the throngs of visitors to the World's Colombian Exposition. The original conception was an annex with a facade designed to complement Louis Sullivan's Auditorium Building across the street, at the time housing a remarkable hotel, theater and office complex.

The Auditorium Annex was built by famous hotel developer R.H. Southgate. The first section, or north tower, was designed by Clinton Warren, with Louis Sullivan and Dankmar Adler serving as consultants. "Peacock Alley," a celebrated feature of the new hotel, was an underground marble passageway that connected the new annex with the Auditorium Hotel.

The south tower, constructed between 1902 and 1907, was designed by renowned architectural firm Holabird and Roche.

The South Tower construction included a magnificent banquet hall, now known as the Gold Room, which would become the first hotel ballroom in America to use air-conditioning. Another ballroom, called the Florentine Room, was added to the North Tower in 1909. These two famous public rooms combined with the Elizabethan Room and the Pompeian Room to host Chicago's elite social events of the day.

Over the years, various owners have updated the hotel in continuous efforts to keep pace with the conveniences offered by modern accommodations properties. Even the name has been changed. By 1908, the hotel had created an identity of its own as it housed more than 1,000 guest rooms.

In order to differentiate the now successful hotel from its original form, the owners renamed it the Congress Hotel (derived from its location on Congress Street, across from the celebrated Congress Plaza section of Grant Park). The next 50 years brought a succession of owners and improvement programs to the Congress Hotel. A 1916-17 guestroom enhancement project altered the lighting scheme by substituting electrical outlets and desk lamps for cumbersome hanging chandeliers.

The original bathroom plumbing fixtures were replaced in a 1923-24 renovation. In the early 1930's, the former Elizabethan Room on the ground floor was transformed into a stylish nightclub featuring a revolving bandstand. Renamed the Joseph Urban Room, it would become the 1935-36 headquarters for an NBC Radio show featuring the legendary Benny Goodman. Following the outbreak of World War II, the Government purchased the Congress Hotel and used it as a headquarters for U.S. Army officers.

In 1945, a group of Chicagoans banded together to purchase the hotel and reopened it to the public. Five years later, Pick Hotel Corporation purchased the property and embarked on a multi-million dollar remodeling and modernization program. The 1950-52 renovation involved the creation of a mural-encircled lobby, new front desk, new corridors, new third floor public rooms, new Congressional and Presidential Suites, and a new supper club called the Glass Hat.

In the early 1960's, yet another modernization program included the construction of a new ballroom and the addition of escalators, a novelty for hotels during that era. Even through the hotel building boom of recent years, the Congress Plaza Hotel has retained its unique character by blending the old with the new. In contrast to many of the formulaic chains and property layouts, guest room and suites remain larger, ceilings higher, bathrooms bigger and window expanses wider.

The abundant public space, large lobby, and long corridors provide a freedom of movement rarely seen in the tighter confines of space-saving properties built more for convenience rather than a true destination or getaway spot.

Many famous people have stayed at the hotel, including several U.S. Presidents. In fact, the Congress Plaza Hotel was once known as the "Home of Presidents" among Chicago hotels.

The Congress Plaza Hotel has played a prominent role in some of Chicago's most important and famous political conventions. Many memorable interviews, caucuses, and deliberations were staged here. In 1912, former President Teddy Roosevelt's comment to the local media coined the famous "Bull Moose" nickname for his newly created Progressive Party. In 1932, the hotel was back in the limelight serving as the command post for President-elect Franklin Roosevelt and the Democratic Party.

During the summer of 1952, a national television audience was given a front row seat with the Republican Credentials Committee as they gathered in the Gold Room. In 1971, nearly 3,000 people packed the Great Hall when President Richard Nixon addressed the Midwest Chapters of the AARP and National Retired Teachers Association.

The Congress Plaza Hotel remains a prosperous and thriving part of Chicago's living history, and our staff will be more than happy to share points of interest and encourage guests to explore the hotel from a historical perspective. From famous architects to Presidential speeches, the Congress Plaza Hotel has enjoyed a colorful and interesting past. While we fondly look back, we invite you to be a part of our exciting future.

In all of the haunted places in Chicago, none is bigger or appears to have the level of paranormal activity that people have experienced at the Congress Plaza Hotel. The Congress Plaza Hotel has accommodated everyone from presidents, to celebrities, to millionaires, and gangsters such as Al Capone since 1893. In the history of hotels, no other hotel has had a longer strike by the hotel than the Congress Plaza.

The stories from people who have either visited the Plaza or stayed there have varied. Room 441 is said to be the home to the shadowy outline of a woman. It is such a creepy and unnerving room, security for the hotel has been called there countless times. People have heard pianos playing when no one is near them; gunshots in the banquet room are another sound people have heard. People have seen the ghost of a young boy they believe died when he and his brother jumped out of a window with their mother. When attending weddings in the Gold Room, photos of people taken around the grand piano have come back with people not in the photos. A room on the twelfth floor is sealed permanently and covered with wall paper because of how terrifying the room is said to be.


Kind of a no-brainer, considering it's been around since the 1893 world's fair, when H. H. Holmes met his victims in the lobby before luring them to his murder castle. Since the 1940s, guests have seen the ghost of Al Capone, who once owned and worked out of a suite on the eighth floor. Lights tend to flicker, strange noises seem to emanate from the walls, and the hotel is often said to have inspired Stephen King's 1408.


The following video documents the boarded up rooms and some other interesting information for the 12th floor.