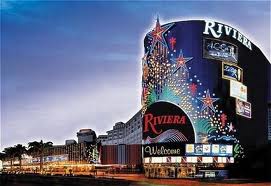 The Riviera opened on April 20, 1955 as the first high-rise and the ninth resort on the Las Vegas Strip. The Riviera is one of the oldest and most famous casino resorts in Las Vegas. The Riviera also broke new ground in its design: previously, Strip resorts resembled roadside motor courts.

The opening of the Riviera, along with The Dunes and the Royal Nevada casino resorts within a month were the subject of a famous issue of Life Magazine, on June 20, 1955 with a Moulin Rouge showgirl on its cover. The headline was "Las Vegas-Is Boom Overextended?" and a story about how Las Vegas had built too many hotel rooms to be profitable.

The Riviera was built by a group of investors from Miami. The resort has gone through many ownership changes over the years, including a period of control by owners linked to the Mafia-Meyer Lansky for example- (as was the case for many Vegas resorts in the 1960s and 1970s). Harpo Marx and Gummo Marx held minority interests at the opening. The Marx brothers also owned slightly under ten percent of the Hotel. It is said that Gummo talked his brother into putting money into the Hotel, for it would be a great place for him to perform. Harpo was easily sold. Dean Martin once held a minority ownership stake while he was a headliner in the showroom. Gus Greenbaum was brought in to manage the Riviera in 1955. He had successfully managed the Flamingo Hotel after the death of Bugsy Siegel. However, Greenbaum's drug and gambling addictions led to his embezzling from the casino. In December 1958, Greenbaum and his wife were murdered in their Phoenix, Arizona home, reportedly on the orders of either Meyer Lansky or Tony Accardo.

Meshulam Riklis bought the Riviera in 1973 for $56 million. The hotel/casino filed bankruptcy in 1984 and then again in 1991, at which time Riklis lost ownership. Ownership was then acquired by Riviera Holdings Corp.

One of the oldest still-standing casinos on the Las Vegas Strip, the Riviera Hotel & Casino is notorious for its connection to the Mafia -- it's believed to have been the site of numerous mob-related murders. Today, hotel workers routinely hear voices in the stairwells and feel the presence of the no-longer-living when cleaning the top-floor suites.