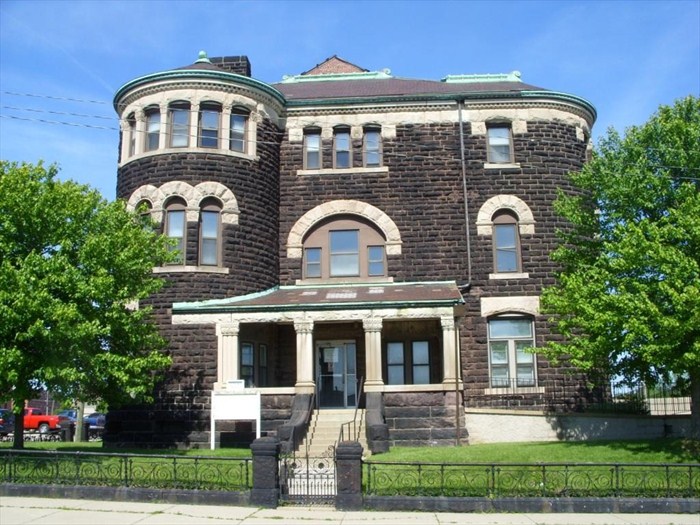 Completed in 1889, the jail was the first to house the Sheriff of the County. Featuring 3 floors of cells for men and 1 floor for women, the jail was a marvel of architecture built out of Millsburg Stone, it was built to last for generations to come.

On June 12, 1888 the County Commissioners bought the P. Smith and Sons lumber yard on the southeast corner of South Third Street and the canal for $11,000.00. They then made public announcement that in 40 days they would receive bids for the building of "The finest jail and Sherriff residence in the state."

The Commissioners, Probate Judge, County Clerk, Sherriff Andrew Crilly, and one citizen were appointed by the Common Please Courts to review plans and specifications of the new jail. J. W. Yost of Columbus, one of Ohio's renowned architects made the plans and specifications of the new jail. This jail would be the first to house the Sheriff of the County. It would be a four stories, attic, and basement structure. It would segregate men and women of separate floors.

In July the County Commissioners accepted the bid of $68,685.00 from the local Hibbert and Schaus Company to build the new jail of Millersburg stone. Millersburg stone is a long lasting easy to carve and quarry brown sandstone. Isaac D. Smead Company of Toledo won the bid for the heating system. Kammerer and Myers for the roofing and copper work, Potts and Reed of Columbus for the gas pipe and plumbing, and J. H. VanDoren of Cleveland for the iron and steel work. The Commissioners also spent $1716.10 on furniture for the Sherriff's residence from a company in Toledo.

On May 16, 1889, the newspaper says, "The stone was cut all ready to put in place, like that of Solomon's Temple, during the mild weather of last winter. . built as it is of Millersburg brown stone with trimmings of white stone artistically cut and carved with frogs, snakes, and other designs." During this time period, three major mid-America sandstone quarries existed. Each had its own color. Millersburg brown stone was quarried and cut new Millersburg, Ohio. Berea stone was a dark grey colored sandstone quarried new Berea, Ohio. The third was Tippecanoe stone which is white, and was quarried in Tippecanoe County, Indiana. There was a flare-up by the newspaper against the commissioners because the jail cost double it's bids. Deductive reasoning seems to suggest prices increased due the shipping of the sandstone, each stone weighs from one to two tons and the stones would have to have been transported miles from Millersburg to New Philadelphia to catch a canal boat to come to Newark, that would of take a tremendous amount of time by freight wagon to the canal boat for shipment. So it is believed that the stones would have been shipped by train, with a more direct route to Newark although the prices would have been far more expensive.

Sherriff Crilly was the first sheriff to live in this jail. This amenity having been the perk of the jailer for the last 80 years. Sherriff Crilly established new rules for the new County Jail, and notices posted advised the public that they would be strictly followed.

The jail has three floors of cell blocks for males containing 8 cells each that held 4 bunks each. There were 10 women cells on the fourth floor. 32 inmates were held in a cell block area of 640 square feet or 20 square feet per man including cells. The cell sizes were 8ft X 8ft, so each of the 4 men in a cell, if locked down, had 16 square feet to live in, not including the 4 bunks and toilet/sink combinations. While the 1889 jail was built for 96 men or 30 women (126 total), in hard times the jail held as many 165 inmates by putting mattresses on the floor. Cells were locked down by means of iron levers and geared wheels. The heating was by hot water and in the winter time the windows had to be opened to let the temperature to come back down to the upper 70's. Inmates were fed from little aluminum "dog dishes, "and they ate in their cells.

Lighting was poor and inmates and deputies could not see well. Even when the cell blocks were painted in off white, instead of the typical black and grey, the hallways were still dank and stark. Even the detective bureau had to be housed in a little mobile home next door to the jail. But the County received variances, and the jail was constantly inspected by the Ohio Department of Correction and Rehabilitation. Cells had to be reduced to 2 men per cell. The total population had to drop to 68. The "dog dishes" where replaced by stainless steel meal trays and 2 meal tables had to be installed in the 6 foot X 16 foot recreation area. Electric cell locking devices were installed. More officers in the form of civilian jailers were hired, so inmates could be monitored 24 hrs a day. Commissary was given, and color, cable TV made its debut.

In 1910 a Dry Agent Detective Carl Etherington was in Newark Ohio to shut down bars. Licking County was a Dry County and it was against the law to operate bars. There were 58 Bars operating in downtown Newark at the time along with many Brothels. The Sheriff, Police Chief and Mayor were all on the take and allowing these places to operate. Etherington was involved in a scuffle with a former Captain of the Newark Police Department and was getting beat badly as he drew his 44 and shot the man. He then fled and was later placed inside the Old Jail for protection. A crowd of over a thousand formed outside the jail and eventually broke into the jail. Etherington was beaten to death inside his cell and then was drug out of the jail and lynched to a telegraph pole on the Southeast side of the Town Square. The Governor of Ohio forced the Sheriff and Mayor to resign for allowing this to happen and the Police Chief was fired. Click the button below to read more and to view more photographs.

This 72 year old woman (Laura Devlin) killed her husband. She claims that he had tried to kill her multiple times. She cut off his arms and head with a hand saw and cooked them in the oven and threw the torso out in her back yard. Newark Police found the the torso in the yard and the hand saw. Devlin then admitted to killing him. She was arrested and booked at the Newark Police Department and then taken to the Old County Jail to be incarcerated. She was later sent to Lima Ohio for Psychiatric Evaluations and died there of Pneumonia. Click on the button below for more information and newspaper articles of this ghastly murder.

Walter Benjamin Robertson asked his girlfriend Della Crottinger to marry him and she said yes. Robertson then murdered her on this same day. When arrested he claimed that he was insane. After the Doctor's report said he was sane he hung himself in his cell at the Old Jail. Robertson would not reveal his motive in murdering her. He was said to be a shady character.