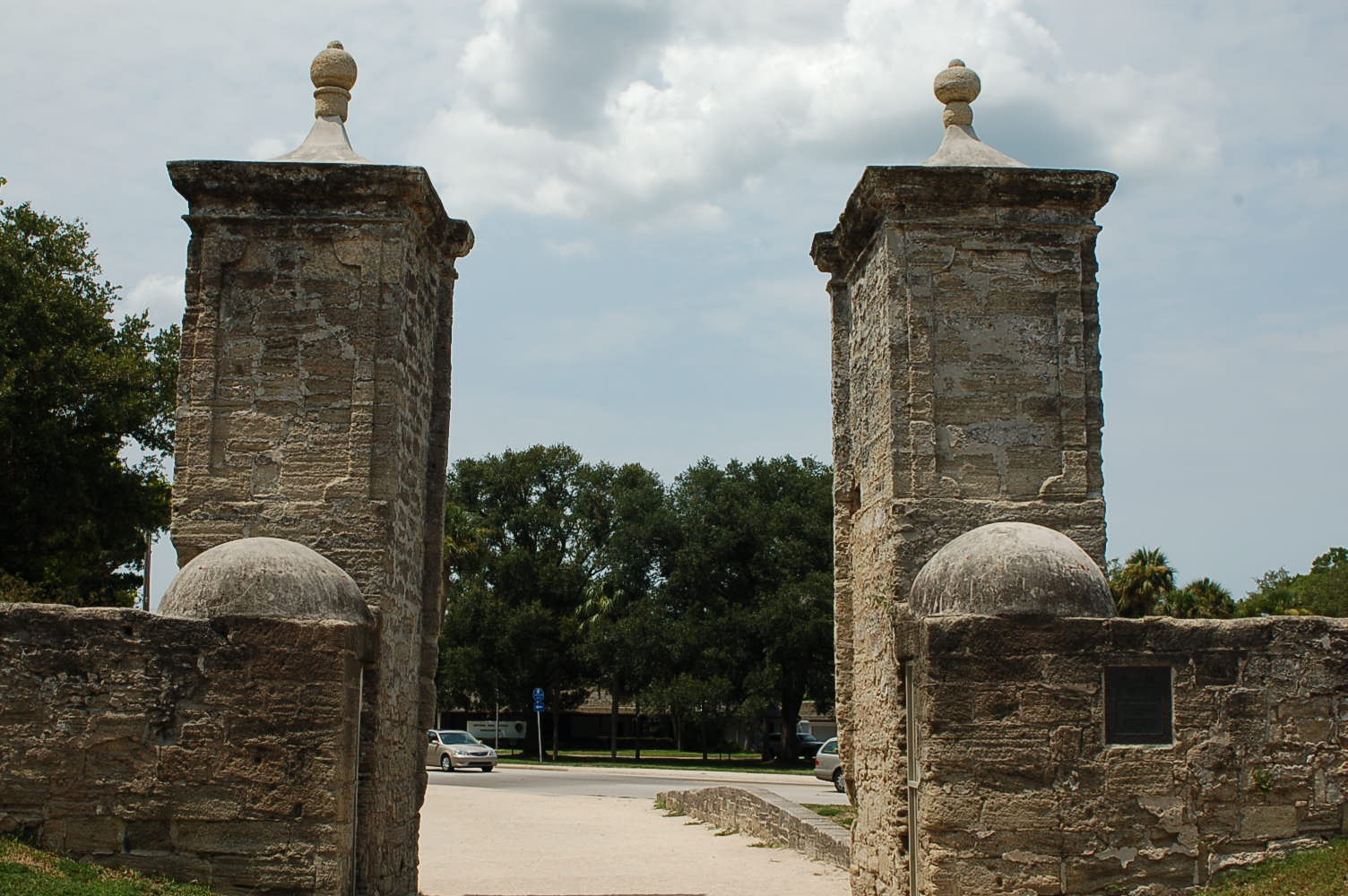 Visitors to historic St. Augustine, Florida, can still see evidence that the ancient Spanish city was once surrounded by strong walls.

Visitors to historic St. Augustine, Florida, can still see evidence that the ancient Spanish city was once surrounded by strong walls.

The city was nearly 150 years old when the Spanish military and local residents finally decided enough was enough and began the process of fortifying the entire town. St. Augustine had been attacked a number of times over the years, but an English assault in 1702 was the "straw that broke the camel's back."

Led by Governor James Moore, the large English force and looted and sacked the city. Even though he was unable to capture the powerful Castillo de San Marcos, where 1,500 residents took shelter, Moore devastated the old city.

Two years later in 1704, the Spanish began construction of the Cubo line, a powerful earthen wall backed by palmetto logs. From the outworks of the Castillo de San Marcos, the wall extended west across the northern end of town to the San Sebastian River.

Along this line were the main gates to the city and several larger fortifications called redoubts. The redoubts added extra power to the line and provided locations for artillery emplacements.

From the western end of the Cubo line, a second wall called the Rosario line ran south down the west side of the city. Several 18th century maps show that these walls enclosed all of St. Augustine.

That the walls were effective is evident from the fact that St. Augustine was never again conquered after they were built. Governor James Oglethorpe's English army besieged the city in 1740, but was unable to break through the powerful defenses.

Because the earthworks and timber deteriorated over time, the walls were rebuilt and repaired over the more than 100 years that they protected the city. Major construction projects took place during the 1730s and again in 1808.

The last known time the walls were used in conflict was during the Second Seminole War (1835-1842). War parties of Seminoles struck around St. Augustine, but advanced no closer to the city itself than the Cubo Line.

Visitors to St. Augustine today can see several reconstructed sections of the historic city walls. One long section of the Cubo Line has been restored on the grounds of the Castillo de San Marcos. The old fort itself anchored the eastern end of the line and the restored sector stretches west across what was once the northern edge of the city.

A second section of the Cubo Line can be seen just across the street from the Castillo at the Old City Gate.

The Old City Gate is a noted landmark in St. Augustine. Constructed of coquina in 1808, it was built at the time of the last reconstruction of the Cubo Line. The gate columns still stand today and reconstructed sections of the earthworks adjoin it to the east and west. The gate opens onto the northern end of St. George Street which leads through the heart of the old city.

Many people say the city gates are haunted due to the yellow fever epidemic that broke out. During that time, a little girl was found dead wearing a white dress. Nobody claimed her, but some say her name was Elizabeth and she was later buried in an unmarked mass grave in the nearby Huguenot Cemetery.

There are those who say if you walk near the city gates in the early morning hours, you can see her dancing by the gates.

We also found an update to this story that sates that during the time of the epidemic, if there was someone found in your home with yellow fever, you were driven from the town and your house was burnt down so the disease would not spread further. They claim that little Elizabeth's parents did not want to leave town, so they left her at the city gates to avoid any detection of the disease in their home.

This is one of the most famous ghost stories in St. Augustine.


My parents have lived in St. Augustine for over 20 years-one night I was driving to their home very late at night when I began approaching the fort and the city gates were on my right. It was well after midnight and I looked and saw a little girl with a white dress waving at me standing at the city gates. My first thought was "where are her parents"?! It was so vivid and so real I never thought about it again until years later I was on a ghost tour and they shared the story of Elizabeth-I knew it was real because I saw her with my own eyes!