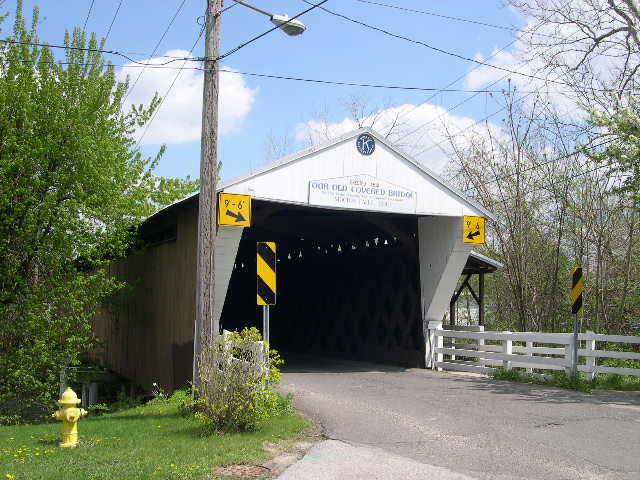 The Newton Falls covered bridge connects Bridge Street with Arlington Road and crosses one of the two branches of the Mahoning River which cut through Newton Falls.

Constructed in 1831, the bridge still accommodates autos over the East Branch of the river. It is the second oldest covered bridge in the state, the only one in Ohio with a covered crosswalk, and the last covered bridge in Trumbull County. The crosswalk was added in 1921 - 1922 for the safety of students walking to the school on North Center Street at the eastern end of Bridge Street.

The bridge is 117 feet long and is of the Town lattice truss style. It is said to have replaced a log bridge constructed on the same site. Maintenance on the historic structure is provided by Trumbull County.

Over the years, the wooden span has required occasional repair after floods, ice jams, a tornado, and continuous use. Truck traffic is prohibited. In November 1974, the bridge was listed with the U.S. Dept. of the Interior's National Register of Historic Places.

The original oak floor of the bridge was laid crosswise with planks 2" thick and 10" - 12" wide. The floor was completely replaced in 1982. The Trumbull County engineers attempt to match the original materials but none of the planks in the structure are standard size today and must be specially cut. Hickory lumber is difficult to find now and the rafter beams must be obtained in Canada. The bridge was reinforced with steel beams and piers in 1962. After the May 31, 1985 tornado, the main roof and the sidewalk roof were repaired and covered with metal.The East Branch structure is one of possibly five covered bridges which were constructed in Newton Township.