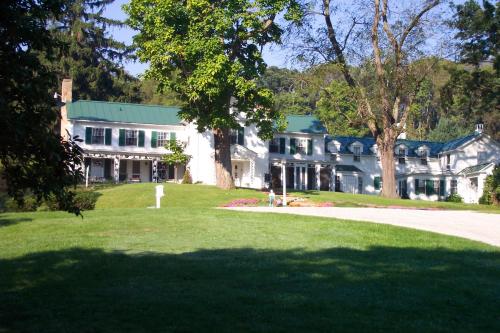 In the late 1930s, Louis Bromfield moved back to the United States, to his childhood surroundings in Ohio.

In the rolling countryside of Richland County, Louis Bromfield, Pulitzer Prize-winning author and dedicated conservationist, created his dream -- Malabar Farm. Inspired by his love of the land, Bromfield restored the rich fertility of the farmlands and preserved the beauty of the woodlands. He built a 32-room country home, where his family, friends and neighbors could share the pleasure of life on the farm.

In his book, Pleasant Valley, Bromfield wrote, "Every inch of it (the house) has been in hard use since it was built and will, I hope go on being used in the same fashion so long as it stands. Perhaps one day it will belong to the state together with the hills, valleys and woods of Malabar Farm." Bromfield's prophecy came true in August 1972, when the state of Ohio accepted the deed to Malabar Farm. The state pledged to preserve the beauty and ecological value of the farm.

Earlier that year, Bromfield's legacy to future generations came close to being extinguished. Malabar Farm, owned and operated by the Louis Bromfield Malabar Farm Foundation for 14 years, was threatened with foreclosure. But the Noble Foundation, which held the mortgage, agreed to erase the mortgage and accrued interest -- about $280,000 -- when the state of Ohio accepted Malabar Farm as a gift to the people of Ohio.

From 1972 to 1976, Malabar Farm was operated jointly by Ohio's Department of Natural Resources and Department of Agriculture. Then in 1976, Malabar became one of Ohio's state parks. As a park, Malabar Farm is dedicated to perpetuating Bromfield's farming philosophies, preserving the Big House and its many artifacts, and providing a place where visitors can explore life on a farm and the beauty of nature.

Malabar Farm and the nearby Pleasant Valley Cemetery are supposedly haunted by the ghost of Ceely Rose, a young girl who murdered her family in 1896. Ceely Rose and her family lived in a house on the grounds of Malabar Farm State Park. Ceely Rose had a huge crush on a local boy named Guy Berry. Guy, however, did not feel the same about Ceely. Ceely was so in love with Guy that she told her family, friends (in fact, anyone who would listen!) that she was engaged to him. Guy was afraid that he'd hurt Ceely's feelings if he told her he had no intention of marrying her, so instead he lied and told her that they could never get married because her family did not approve of him. That made Ceely furious, she couldn't believe her family would keep her from her true love. So she decided to soak flypaper in water and then pour the arsenic-laced water on the cottage cheese she served them. Within three short months her parents and brother died. Guy left town for several years, he was afraid what Ceely might do to him if she ever found out the truth. Some of her neighbors eventually got her to confess to the murder. She was locked away in a mental hospital for the rest of her life, which was about 41 years!