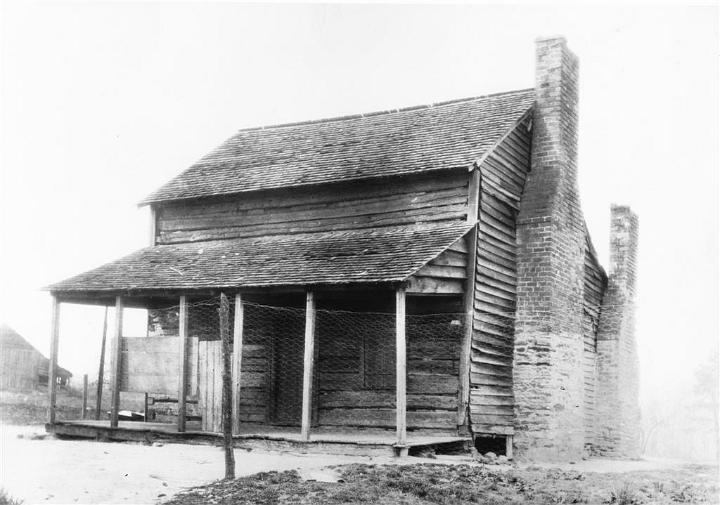 On December 25, 1929 (Christmas) Charlie Lawson killed most of his family and then himself at this location. Structure no longer exists due to collapse.

Charlie Lawson's parents, Augustus and Nancy, lived in the unincorporated community known as Lawsonville, located ten miles from Danbury, the Stokes county seat. He was born there and, in 1911, married Fannie Manring. They had eight children, but the third, William, born in 1914, died of an illness in 1920. In 1918, following the move of his younger brothers, Marion and Elijah, to the Germanton area, Lawson followed suit with his family. The Lawsons worked as sharecroppers, saving enough money by 1927 to buy their own farm on Brook Cove Road.

In 1929, shortly before Christmas, Charlie Lawson took his family (37-year-old wife Fannie and their children: Arthur, 16; Marie, 17; Carrie, 12; Maybell; 7, James, 4; Raymond, 2; and Mary Lou, 4 months) into town to buy new clothes and to have a family portrait taken. Since they were far from wealthy, this seemed unusual. The new clothes ultimately became burial outfits. On that day he began the slaughter with his daughters, Carrie and Maybell, who were setting out to their uncle and aunt's house. Lawson waited for them by the tobacco barn; when they were in range, he shot them with a shotgun, then ensured that they were dead by bludgeoning them. He then placed the bodies in the tobacco barn.

Afterwards, he returned to the house and shot Fannie, who was on the porch. As soon as the gun was fired, Marie, who was inside, screamed, while the two small boys, James and Raymond, attempted to find a hiding place. Lawson shot Marie and then found and shot the two boys. Lastly, he killed the baby, Mary Lou. It is thought that she was bludgeoned to death. After the bloody massacre Charles hid in the nearby woods.

People began to gather at the Lawson residence after hearing about the tragedy. A few hours after he killed his family the gathered people heard one last gunshot. The gunshot where Mr. Lawson took his own life.

Officials found letters near Charles that he had written to his parents. They also saw where the grass had been trampled in a circle going around a tree near Mr. Lawson's body. It is believed that he had been pacing around the tree before taking his own life.

The bodies of his family were found with their arms crossed over their chests and rocks underneath their heads.

The only survivor was his eldest son, 16 year-old Arthur, whom he had sent on an errand just before starting his deadly work. The bodies of the family members were found with their arms crossed and rocks under their heads. The gunshot signaling Charlie Lawson's own suicide was heard by the many people who learned of the gruesome event on the property and had already gathered there. A police officer who was with Charlie Lawson ran down and found Charlie dead and letters to his parents. As footprints encircled the tree it was supposed that he had been pacing around the tree prior to taking his life.