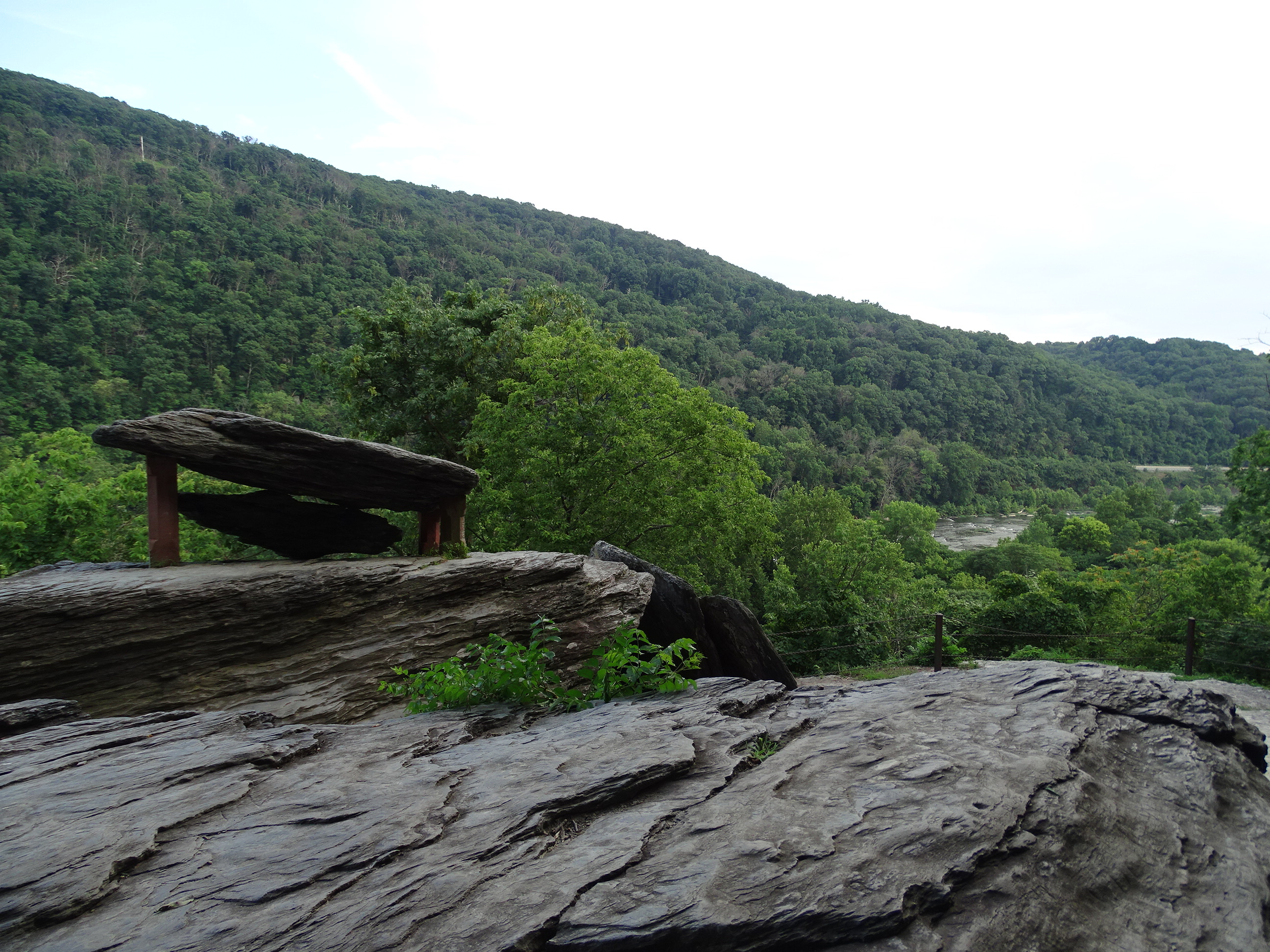 Several large masses of Harpers shale, piled one upon the other, comprise Jefferson Rock.

Several large masses of Harpers shale, piled one upon the other, comprise Jefferson Rock. The name of this landmark derives from Thomas Jefferson, who stood here on October 25, 1783. His description of the view first appeared in the Notes on the State of Virginia, published in 1785:

"The passage of the Patowmac through the Blue Ridge is perhaps one of the most stupendous scenes in Nature. You stand on a very high point of land. On your right comes up the Shenandoah, having ranged along the foot of the mountain a hundred miles to seek a vent. On your left approaches the Patowmac in quest of a passage also. In the moment of their junction they rush together against the mountain, rend it asunder and pass off to the sea. The first glance of this scene hurries our senses into the opinion that this earth has been created in time, that the mountains were formed first, that the rivers began to flow afterwards, that in this place particularly they have been so dammed up by the Blue Ridge of mountains as to have formed an ocean which filled the whole valley; that, continuing to rise, they have at last broken over at this spot and have torn the mountain down from its summit to its base. The piles of rock on each hand, but particularly on the Shenandoah, the evident marks of their disruptions and avulsions from their beds by the most powerful agents in nature, corroborate the impression.

"But the distant finishing which nature has given the picture is of a very different character. It is a true contrast to the former. It is as placid and delightful as that is wild and tremendous. For the mountains being cloven asunder, she presents to your eye, through the cleft, a small catch of smooth blue horizon, at an infinite distance in that plain country, inviting you, as it were, from the riot and tumult roaring around to pass through the breach and participate in the calm below. Here the eye ultimately composes itself; and that way, too, the road happens actually to lead. You cross the Patowmac above the junction, pass along its side through the base of the mountain for three miles, the terrible precipice hanging in fragments over you, and within about 20 miles reach Frederictown and the fine country around that. This scene is worth a voyage across the Atlantic."

The uppermost slab of Jefferson Rock originally rested on a natural stone foundation so narrow that one was able to sway the rock back and forth with a gentle push. Because this natural foundation had "dwindled to very unsafe dimensions by the action of the weather, and still more, by the devastation of tourists and curiosity-hunters," four stone pillars were placed under each corner of the uppermost slab sometime between 1855 and 1860.

A few friends and myself whom we consider ourselves to be amateur ghost hunters, decided to go night hiking in Harpers Ferry. This time we decided to take a different path then the one we usually take which is up all the stairs. We decide this time to take the path without stairs behind the wax museum and by the root cellars. As we passed the church on the top of the mountain there on our way up to "Jefferson Rock", I felt something tugging on my hand. I looked over at my friends and none of them were holding my hand. I looked down at my hand and there stood a little girl all dressed in white holding onto my hand and a puppy walking next to her. As we continued up to Jefferson Rock, the little girl was still holding onto my hand following my every move. I know she was a ghost but I never once felt afraid of her. Since that one time, my friends and myself have been night hiking numerous times and have encountered nasty spirits as well as the nice one's like the little girl all dressed in a long white 19th century gown. Some of the "meaner" spirits have played tricks on us, such as breaking a flash light, tossing my friend down and hill and tree branches falling on top of us. I never did find out anything about this little girl, and I am still looking for information on her. I hope to someday find out who she is and why she is such a warm feeling ghost. Stories are personal encounters that were submitted to us by our website visitors. Unless otherwise mentioned, stock photos are used to help represent the story and are not actual photographs that were taken during the author's encounter.