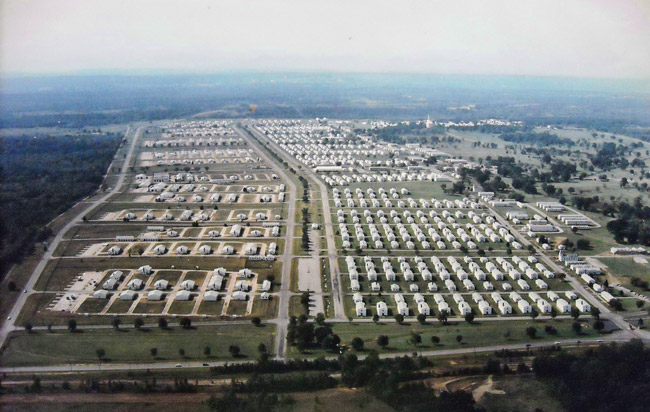 On September 9, 1941, construction started on Camp Chaffee. Then on December 7, 1941, the first soldiers arrive. Between 1943-1946 some 3,000 German prisoners of war encamped at Camp Chaffee. It was the home of the 5th Armored Division from 1948-1957. In 1975 Fort Chaffee Refugee Processing Center for Indochinese refugees. 50,809 Vietnamese refugees were processed. In 1980-1982 Fort Chaffee designated Cuban refugee Resettlement Center. 25,390 Cuban refugees were processed through. In 1983 the motion picture "A Soldiers Story" was filmed at Fort Chaffee. In 1986 Joint Readiness Training Center pilot program announced.  In 1987 the movie "Biloxi Blues" was also filmed there. Displaced Hurricane Katrina victims were processed at Fort Chaffee in 2005, but for the most part it is used as a training base.  January 29, 2008, winds whipped power lines to the ground which ignited fires that burned 150 buildings in the cantonment area - mainly old barracks that in the past housed soldiers, Vietnamese and Cuban refugees, and  Hurricane Katrina evacuees.

Unfortunately two of the paranormal locations at Fort Chafee no long exist.  In August of 2011, the barraks and hospital were lost to fire.  Please see the attached article for details.