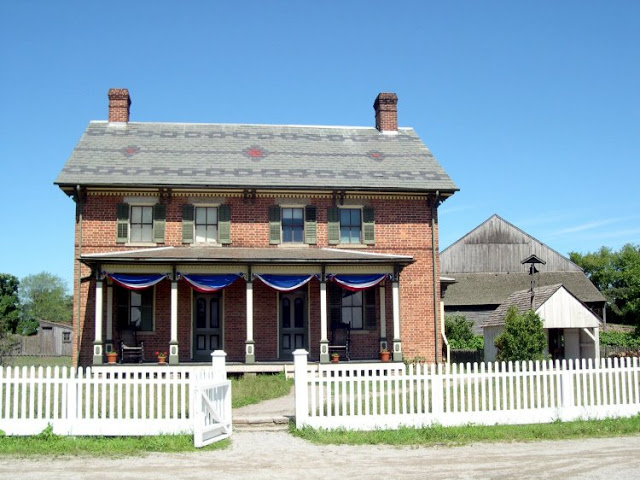 The Firestone Farm was originally built by Peter Firestone in 1828 in Columbiana, Ohio (just a few miles from the Pennsylvania border), and is now a gem among gems inside Greenfield Village.

The Firestone Farm was originally built by Peter Firestone in 1828 in Columbiana, Ohio (just a few miles from the Pennsylvania border), and is now a gem among gems inside Greenfield Village. Among the family members living there in the latter half of the 19th century was young Harvey Firestone, the grandson of Peter, who would later gain fame and fortune in the tire industry and became a close friend of Henry Ford. During the 19th and into the 20th century, the Firestones raised a large flock of sheep, with wool being their 'cash crop,' but they also harvested oats, hay, corn, and wheat.

In 1965, nearly thirty years after Harvey's death, his descendants and the local historical society restored the house and opened it to the public for tours, but because of the farm's remote location, it failed to attract many visitors.

In 1983, Harvey's two surviving sons, both in their 70's, gave the house and barn, together with furnishings and a sizable endowment for maintenance, to Greenfield Village as a way to keep the memory of their father.

Disassembling the buildings and reconstructing them some two hundred miles away took over two years. During the dis-assembly and reconstruction, however, the crew made a very interesting discovery: a note tucked beneath a staircase, signed, dated, and hidden by none other than 14 year old Harvey himself, inadvertently revealed the date of the 1882 restoration!

The Firestone Farm, as it stands now in Greenfield Village, is a living history re-creation of life on a farm of the 1880's in Eastern Ohio, and has been restored to look as it did in 1882, when Harvey's parents remodeled the house to give it a more modern look. The wallpaper and furnishings throughout the house show what was considered stylish during the Victorian era.

The curators went to the extreme to perfect this 'experience.' Their methodology was to decide, as accurately as possible, what the Firestone family would have had or would have done. They focused on the people from 1880's eastern Ohio, then 1880's midwest, then 1880's north, etc., until they were satisfied that they had re-created life as once lived.

The Firestone Farm and barn truly make for an authentic living history experience. One can spend hours watching and speaking to the presenters. It's probably the most "living" part of the entire historic complex.

Benjamin and Catherine Firestone raised their three children in this farmhouse, including tire maker Harvey Firestone. Originally located near Columbiana, Ohio, the 1828 house was updated in 1882 to appear more stylish and up-to-date. The traditional Pennsylvania German layout of the Firestone's farmhouse was transformed, with a central foyer, separate dining room and kitchen, a sitting room, closets, wallpaper, and fancy new furniture.

"I took to humming or talking to myself as I opened the Firestone Farm house in the morning, but then I would hear something I didn't want to. Often there are thumps in that house. One particular event happened when the house was just about to open and I was tending downstairs while a couple other ladies were up in the attic on the third floor. I heard a loud crash and I hurried to the stairs, thinking that they had tripped coming down. I called up to see if they were alright and they called down to ask the same of me. We met at the stairs and realized that the thump had come from the second floor. Whether this was to get our attention or as a warning, I can't be sure. I know that we refer to whatever it is as "Sally" but there are times when the sounds, the weird shifts in things, don't feel quite so welcoming, and I do believe that Sally would have been more welcoming."

"A number of years ago I was at Firestone in the fall at the end of the day working with another staff member to finish dishes and clean the kitchen. I was standing by the back porch door when I thought I heard her drop one of the metal plates onto the floor. I turned to see if she was alright when I noticed she was staring at the stove.

I asked if she was o.k. but she just pointed towards the stove and we both noticed that the metal drying rod was bouncing behind it. Neither of us had been by the stove for a while since it was cooling off before the end of the day. We'd had no visitors for at least an hour (it was a cool, rainy day), and we were using the towels that normally sat on the rack.

Pulling the towels off the metal rod pockmarked the walls and rarely resulted in it bouncing. In the nearly ten years I worked there, and countless times I was in that kitchen as the metal of the stove heated up and cooled down, it never happened before.

We couldn't figure out what made that rod pick up and drop by itself, and we stood there dumbfounded and watched it bounce until it stopped. Very weird and cool at the same time.

I tried jumping on the floor and walking by the door to see if that would cause anything, which it did not, and my coworker was sufficiently spooked and wanted to leave pretty quick. I wanted it to happen again so I could test other theories. Still odd. It was the only thing witnessed by someone else that otherwise I would have questioned my sanity."

"The only experience I've ever had was one day at Firestone, I was in the kitchen standing over by the sink. We were cleaning up, when all of a sudden, we heard this loud clang over by the stove. We looked over and saw the rod used for drying flipp forward off the wall, hanging free. No one was over by the stove and there was no way that the wind could have flipped that steel rod like it was. We ladies looked at each other and then I walked over and put the rod back in place and we went about our business. That is the only experience I've had besides seeing things out of the corner of my eye or hearing rocking chairs rock upstairs late at night."

"The rocking chair thing happened while a few of us were staying late at the farm during lambing season. We were just sitting in the house while it's all dark and creepy and we heard the rocking chair upstairs start rocking."

This is not the first presenter to tell me the rocking chair story. In fact, a number of presenters have also mentioned hearing footsteps on the 2nd floor of Firestone while others said they heard women's voices in the kitchen when no one was there. Like the rocking chair story, the narrative of hearing women's voices has been told to me a few times from different presenters over the years. I was also told of hearing heavy footsteps on the 2nd story of the barn well after closing time.

"I've had an experience on the second floor at Firestone Farm as well. That particular year I opened up the farm 3 days a week so I was used to my routine. I heard voices coming from the parent's bedroom when I was opening up the house alone one morning. I stopped dead in my tracks when I heard people talking, and I just started to talk aloud that I respected them and that I didn't want to see anything. I have a deep respect for that house. It didn't really freak me out either. I just felt like I interrupted someone's conversation so I apologized and kept moving on with my day. It gave me a very strange feeling, but I never heard anything again."