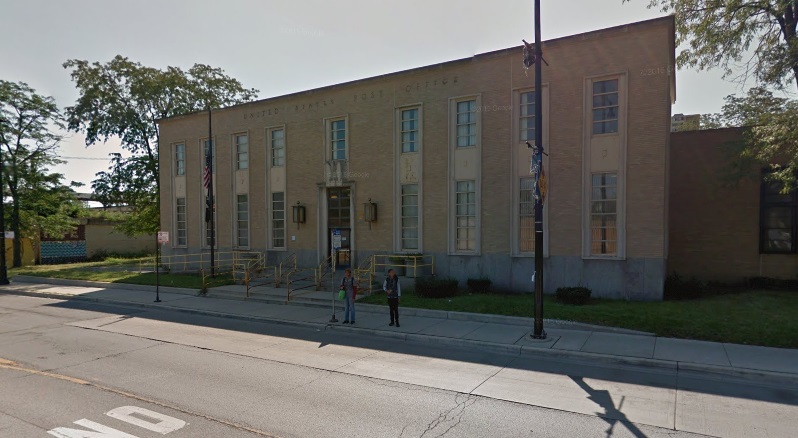 The Englewood Post Office was built over a portion of the site once occupied by the famous "H.H. Holmes Murder Castle."

The story as it is generally told, and made famous in Eric Larson's book Devil in the White City, is that during the 1893 World's Columbian Exhibition, Holmes built an intricate hotel on this spot for visitors to the world's fair, killing and robbing many of them. The house was designed as a death trap, with gas lines he could control to asphyxiate people in their sleep (or not) and chutes he would use to dump his victims unseen into the basement, where he would dissect them, sometimes selling their bodies to medical schools, sometimes just disposing of the evidence.

However according to Adam Selzer, a Holmes expert, the true story is a bit less salacious than that. When Holmes, a swindler, was arrested for insurance fraud in 1894, people remembered that he had a three-story building on 63rd Street that was known to be full of hidden rooms and secret passages. Then they realized that a handful of his employees had disappeared, and wondered if those passages could be for more than just hiding stolen furniture. Some of the missing people were found alive and well, but roughly half a dozen never were. He eventually confessed to 27 murders, though several of the people he confessed to killing were still alive at the time. Authorities thought the figure was closer to a dozen; pulp writers in the 20th century started crediting him with hundreds more. Most of the "castle" would have been in the space now occupied by the grassy knoll just east of the post office.

Whatever the truth of the Holmes case, the post office that sits on the site of the castle today is unremarkable in every way. If you need to visit the post office for more mundane reasons it provides counter, money order, and P.O. Box services, but does not process passport applications or renewals. Street parking is available.

On May 7, 1896, Holmes was hanged and buried, according to his wishes, in a coffin filled with cement that was covered with even more cement (he was concerned about his body being dug up by grave robbers). He lies in the Holy Cross Cemetery, located south of Philadelphia.

As for the Murder Castle, following the fire the upper floors were removed while the street level shops reopened. In 1937, the aging structure was sold to the U.S. government, which demolished it for a post office, which still stands on the site.

Video by Adam Seltzer about the basement of the Post Office.