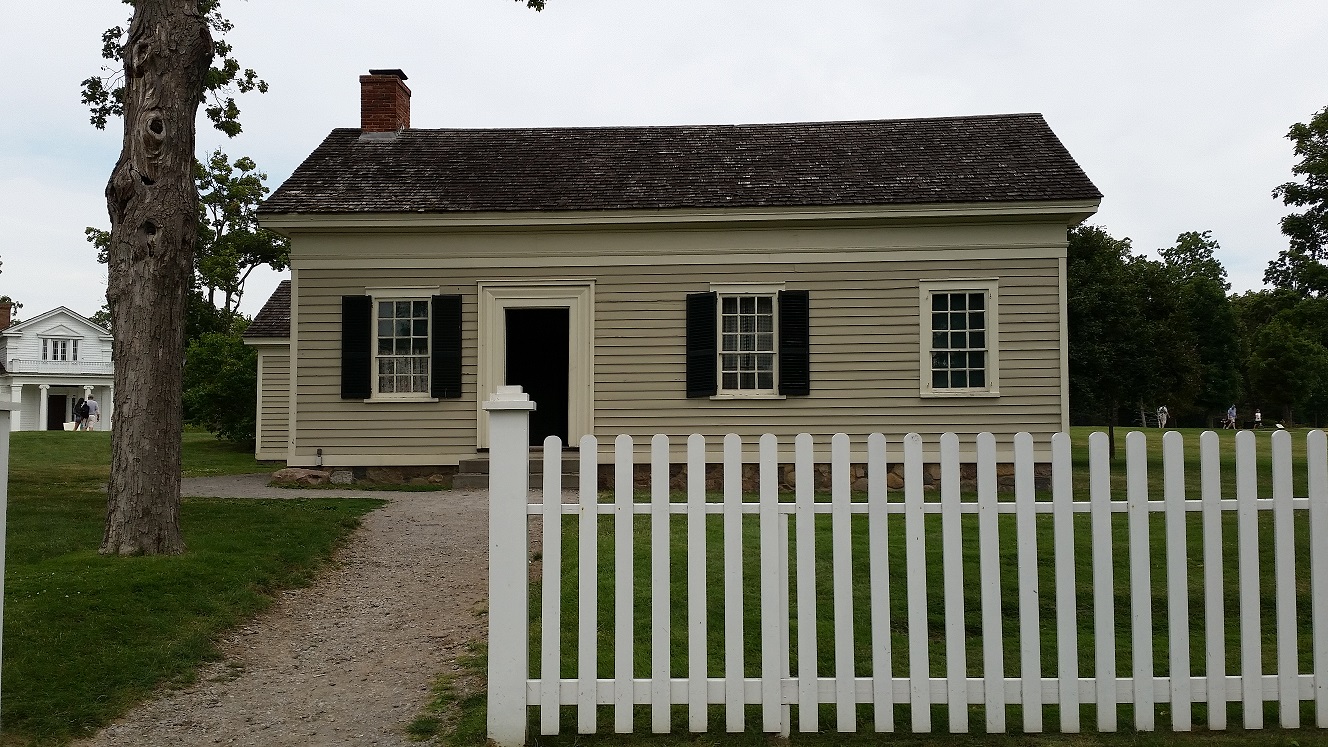 Thomas Edison's great-grandparents fled to Canada after the American Revolution because they had sided with the British. Edison's grandparents started a farm and built this home there. As a boy, Edison enjoyed visiting the farm, where he played in the barn, went swimming, and fished in a nearby river.

When the grandfather of Thomas Edison led his family into Upper Canada in 1811, he settled in Vienna, Ontario, near the shore of Lake Erie. In 1816, their log cabin was replaced by this homestead, the first and for many years the only frame structure in that region. In this home, the father of the great inventor, Samuel, grew to manhood, and married Nancy Elliot, the village school teacher, in the Sunday parlor in 1828.

When his arrest was sought because of his participation in the political rebellion of 1837, the house was ransacked by the military. By that time, Samuel Edison had fled to the United States.

Young Tom had returned to his ancestral home over many summers and fondly recalled the large, simple, farm-type kitchen.

It was moved to Greenfield Village in 1933.

The folks at Greenfield Village show this house as it looked in 1915 - 99 years after it was originally built.

"I don't know well with electromagnetic fields. It's a proven, scientific thing. I follow the typical symptoms and it messes with my balance, making me feel like I'm on a boat. I found this out at the Louvre, which is heavily outfitted with electric security (other museums with this level mess with me as well, but now that I am aware, I can adjust to it). The Edison Homestead has no reason to make these symptoms that I've come to recognize suddenly occur, and yet, they do.

There is a spot in front of the mantel that I discovered, made me feel that way. I'd walk into this spot and I'd feel like I was on a boat, ready to tip over But when I step back, I am perfectly fine and balanced. I toyed with this for some time before I mentioned it to a co-worker and friend. She expressed feeling something strange there as well. Now, feelings are feelings and easily dismissed, so we decided, given the slow, rainy day, to explore this further.

I had never ventured upstairs in this house before that time and, given how slow and dreadfully ugly the weather was, figured it would be safe to peek up and see this beautiful home so that I could adequately explain to visitors what was up there. It was also to explore these weird feelings.

The stairs are dreadfully tight and unforgiving for someone like myself but I had climbed into the Blarney Castle (the stairs are a danger and tight there) without much problem. But halfway up into the Edison landing, I stopped. I physically felt that if I continued, I would tumble backwards down the steps (only about four and not enough to seriously injure me). It took several times before I could walk up there and explore this gem.

Afterward, as the day went on and things needed to be put away, I was in the rooms off to the side that we use for storage now, and peeked out the window to catch a glimpse of a person - a man, to be exact. I hurried out the door and let my co-worker know. We went about the house, peeked out into the rain and saw no one even near the house. Strange that in the falling rain this man did not have an umbrella. A short while later, a shadowy figure moved, or flashed, across the room and out of it. I'm skeptical of shadow figures myself, but this was an awfully strange flash of shadow to pass across a house that was shrouded in a rainy day. Either way, once that shadow flashed, the house felt different. Empty. Normal. I could stand in that spot without feeling off balanced.

I hope that my exploration of Edison (which became my favorite home) and my finding the ghost there has helped it to find peace."