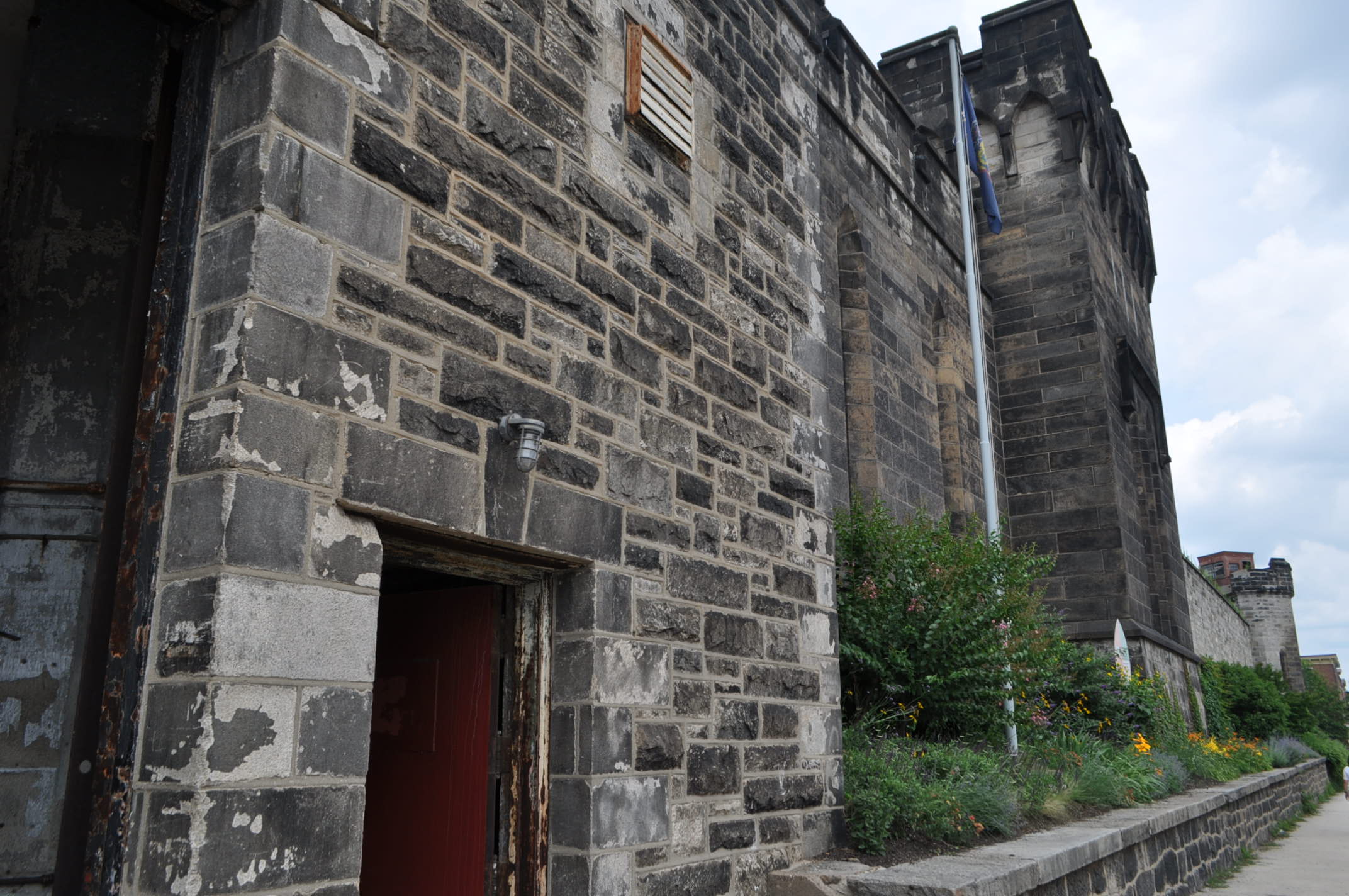 The Eastern State Penitentiary, also known as ESP, is a former American prison in Philadelphia, Pennsylvania.

The Eastern State Penitentiary, also known as ESP, is a former American prison in Philadelphia, Pennsylvania. It is located at 2027 Fairmount Avenue between Corinthian Avenue and North 22nd Street in the Fairmount section of the city, and was operational from 1829 until 1971. The penitentiary refined the revolutionary system of separate incarceration first pioneered at the Walnut Street Jail which emphasized principles of reform rather than punishment.

Notorious criminals such as Al Capone and bank robber Willie Sutton were held inside its innovative wagon wheel design. James Bruno (Big Joe) and several male relatives were incarcerated here between 1936 and 1948 for the alleged murders in the Kelayres Massacre of 1934, before they were pardoned. At its completion, the building was the largest and most expensive public structure ever erected in the United States, and quickly became a model for more than 300 prisons worldwide.

The prison is currently a U.S. National Historic Landmark, which is open to the public as a museum for tours seven days a week, twelve months a year, 10 am to 5 pm.

Designed by John Haviland and opened on October 25, 1829, Eastern State is considered to be the world's first true penitentiary. Eastern State's revolutionary system of incarceration, dubbed the "Pennsylvania system" or separate system, encouraged separate confinement (the warden was legally required to visit every inmate every day, and the overseers were mandated to see each inmate three times a day) as a form of rehabilitation.

The Pennsylvania System was opposed contemporaneously by the Auburn system (also known as the New York system), which held that prisoners should be forced to work together in silence, and could be subjected to physical punishment (Sing Sing prison was an example of the Auburn system). Although the Auburn system was favored in the United States, Eastern State's radial floor plan and system of solitary confinement was the model for over 300 prisons worldwide.

Originally, inmates were housed in cells that could only be accessed by entering through a small exercise yard attached to the back of the prison; only a small portal, just large enough to pass meals, opened onto the cell blocks. This design proved impractical, and in the middle of construction, cells were constructed that allowed prisoners to enter and leave the cell blocks through metal doors that were covered by a heavy wooden door to filter out noise. The halls were designed to have the feel of a church.

Some believe that the doors were small so prisoners would have a harder time getting out, minimizing an attack on a security guard. Others have explained the small doors forced the prisoners to bow while entering their cell. This design is related to penance and ties to the religious inspiration of the prison. The cells were made of concrete with a single glass skylight, representing the "Eye of God", suggesting to the prisoners that God was always watching them.

Outside the cell was an individual area for exercise, enclosed by high walls so prisoners could not communicate. Exercise time for each prisoner was synchronized so no two prisoners next to each other would be out at the same time. Prisoners were allowed to garden and even keep pets in their exercise yards. When a prisoner left his cell, an accompanying guard would wrap a hood over his head to prevent him from being recognized by other prisoners.

Cell accommodations were advanced for their time, including a faucet with running water over a flush toilet, as well as curved pipes along part of one wall which served as central heating during the winter months where hot water would be run through the pipes to keep the cells reasonably heated. Toilets were remotely flushed twice a week by the guards of the cell block.

The original design of the building was for seven one-story cell blocks, but by the time cell block three was completed, the prison was already over capacity. All subsequent cell blocks had two floors. Toward the end, cell blocks 14 and 15 were hastily built due to overcrowding. They were built and designed by prisoners. Cell block 15 was for the worst behaved prisoners, and the guards were gated off from there entirely.

Inmates were punished with the "individual-treatment system." At the time this form of punishment was thought to be most effective. They would be separated from others.

In 1924, Pennsylvania Governor Gifford Pinchot allegedly sentenced Pep "The Cat-Murdering Dog" (an actual dog) to a life sentence at Eastern State. Pep allegedly murdered the governor's wife's cherished cat. Prison records reflect that Pep was assigned an inmate number (no. C2559), which is seen in his mug shot. However, the reason for Pep's incarceration remains a subject of some debate. A contemporary newspaper article reported that the governor donated his own dog to the prison to increase inmate morale.

On April 3, 1945, a major escape was carried out by twelve inmates (including the infamous Willie Sutton), who over the course of a year managed to dig an undiscovered 97-foot (30 m) tunnel under the prison wall. During renovations in the 1930s an additional 30 incomplete inmate-dug tunnels were discovered.

It was designated a National Historic Landmark in 1965.

The prison was closed in 1971. Many prisoners and guards were transferred to Graterford Prison, about 31 miles (50 km) northwest of Eastern State. The City of Philadelphia purchased the property with the intention of redeveloping it. The site had several proposals, including a mall and a luxury apartment complex surrounded by the old prison walls.

During the abandoned era (from closing until the late 80s) a "forest" grew in the cell blocks and outside within the walls. The prison also became home to many stray cats.

One of the most legendary tales comes from Gary Johnson, who helps maintain the crumbling old locks at the prison. In the early 1990s, he had just opened an old lock in Cellblock 4 when he says a force gripped him so tightly that he was unable to move. He described a negative, horrible energy that exploded out of the cell. He said tormented faces appeared on the cell walls and that one form in particular beckoned to him.

But tour guide Ben Bookman says, "It's a lot harder to find a believer than it is to find a skeptic here. We at Eastern State do not claim that the prison is haunted. We run a haunted attraction."

Bookman says the staff does not like to exploit the prison's darker image. "Most people making TV shows come in looking for ghosts. That's not the story we tell. Inmates were real people. These were people's lives. Seventy-thousand people spent time here. We're not going to glorify it, and we're not going to make fun of it."

Perhaps hauntings are a self-fulfilling prophecy - if you want to have a haunted experience, your imagination just might make sure you do. Certainly there are thousands of visitors who say they've experienced no odd feelings, no sudden chills, no strange sounds, no apparitions. And yet there are plenty who say they have.


Charles Dickens visited the prison in the 1840s and found the conditions appalling. He described the inmates at Eastern Penn as being "buried alive..." and wrote about the psychological torture the inmates suffered at the hands of their captors.

Prior to its reform in 1913, the prison which was designed to house 250 inmates had over 1700 prisoners jammed into tiny makeshift cells where there was little light and even less ventilation.

Finding the conditions of the prison unacceptable, the prison was taken over and reformed and the Pennsylvania System was abolished. Finally, in 1971, the sprawling monstrous prison was closed.


Al Capone aka "Scarface" was jailed here for a short spell of 8 months from 1929-30. He even reported spooky happenings. It's said that Al Capone was being haunted and tormented by someone who he killed. A James Clark, he was killed during a valentine's day massacre along with other men.