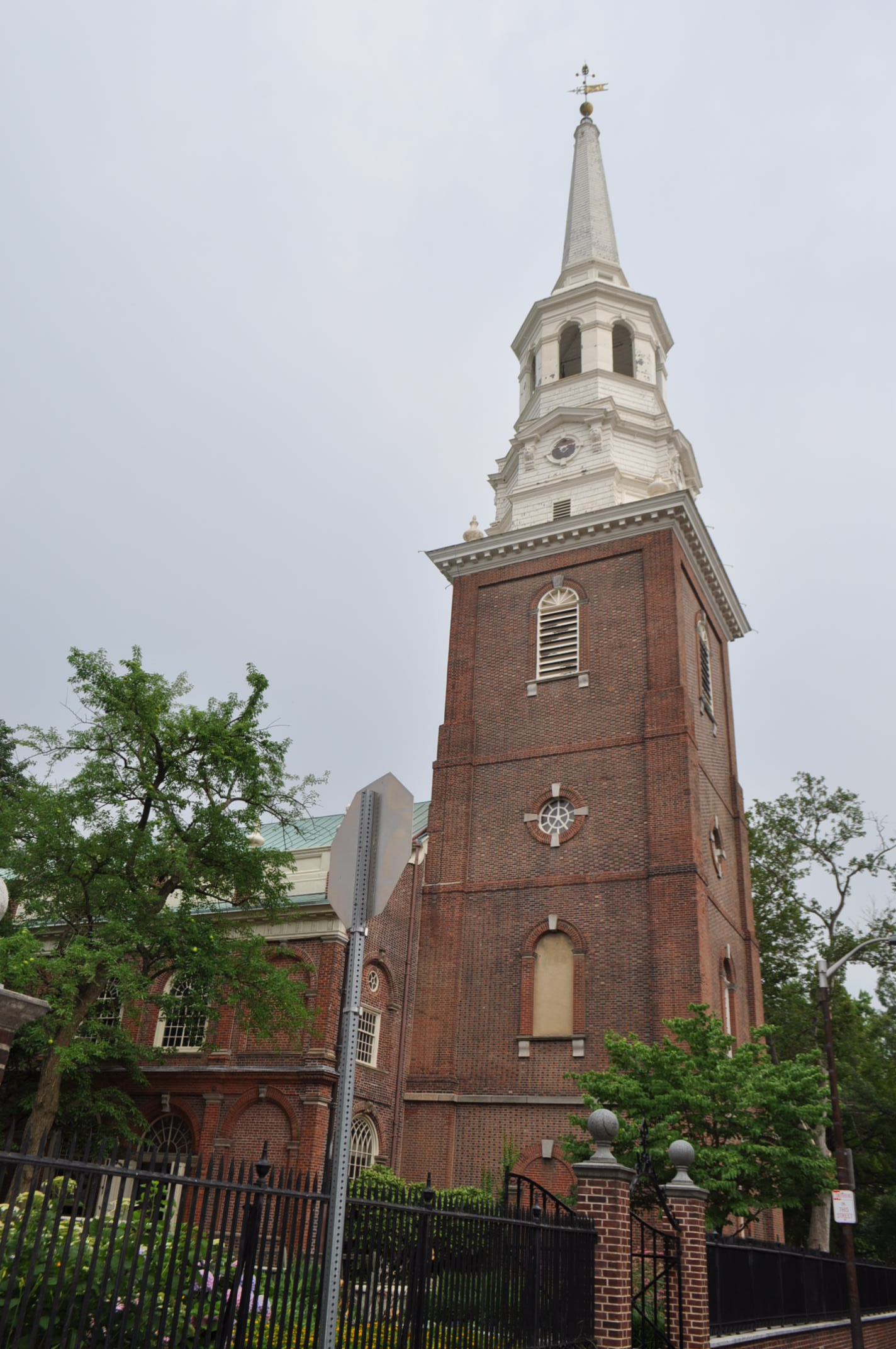 Christ Church is an Episcopal church in the Old City neighborhood of Philadelphia. Founded in 1695 as a parish of the Church of England, it played an integral role in the founding of the Protestant Episcopal Church in the United States.

Christ Church, the birthplace of the American Episcopal Church, was founded in 1695 as a condition of William Penn's Charter. Known as "The Nation's Church," it hosted members of the Continental Congress during the American Revolution and Presidents George Washington and John Adams in the first decade of the newly established Republic. Among early members were Benjamin and Deborah Franklin, Betsy Ross, John Penn (William Penn's grandson), and signers of the Constitution and of the Declaration of Independence, including Robert Morris, Benjamin Rush, and Francis Hopkinson.

Dating to 1744, the current building has been cited as "our finest Early American church" and one of the finest Georgian structures in America. Its steeple (1754), financed by a lottery organized by Benjamin Franklin, is the work of Robert Smith, one of America's earliest architects. For 56 years, the steeple made Christ Church the tallest structure in North America.

Christ Church is a privately managed historic site that is an official component of Independence National Historical Park. An active Episcopal parish, the church hosts daily historical talks and tours.

Search the church's archives for information about individuals who were baptized, married or buried at Christ Church.

Tales of hidden passageways, underground tunnels, and skeletons always make for an intriguing story. According to historical accounts and newspaper records held here at the Historical Society of Pennsylvania, there are plenty of good stories about Christ Church, the oldest Episcopal church in Philadelphia.

The church has also been the site of mystery and intrigue. One such story comes from Townsend Ward, a secretary of the Historical Society of Pennsylvania, who died in 1885. Ward published an account in 1880, which was later reprinted in the Public Ledger in January of 1907. He related how on a cold November evening, the voice of a woman had been heard at Christ Church. The sexton and two young boys searched the church, but no one was located. A month or so later, the iron door of a sepulcher was opened on the north side of the church, which revealed upon its steps "the body of a young lady in her shroud, who had been buried as dead" but met her grim fate as a "premature burial."

During late March in 1909, many Philadelphia newspapers, such as the Bulletin, The Press, and others, ran articles about the discovery of a "Revolutionary Tunnel" leading to Christ Church. The entrance to the tunnel was accidentally found by Edward Duncan and other workmen underneath the hardware store of James M. Vance & Co. at 211-13 Market Street. Described as being some 200 feet in length, 3 feet wide, and 7 feet high, the main passageway terminated at a blind wall where the "remains of an old stairway were also found" along with "the crumbling bones" of some eight skeletons, determined later to be located directly underneath the tower of Christ's Church. It is believed that these tunnels were used to get the bells out of the church while it was being guarded by the British.