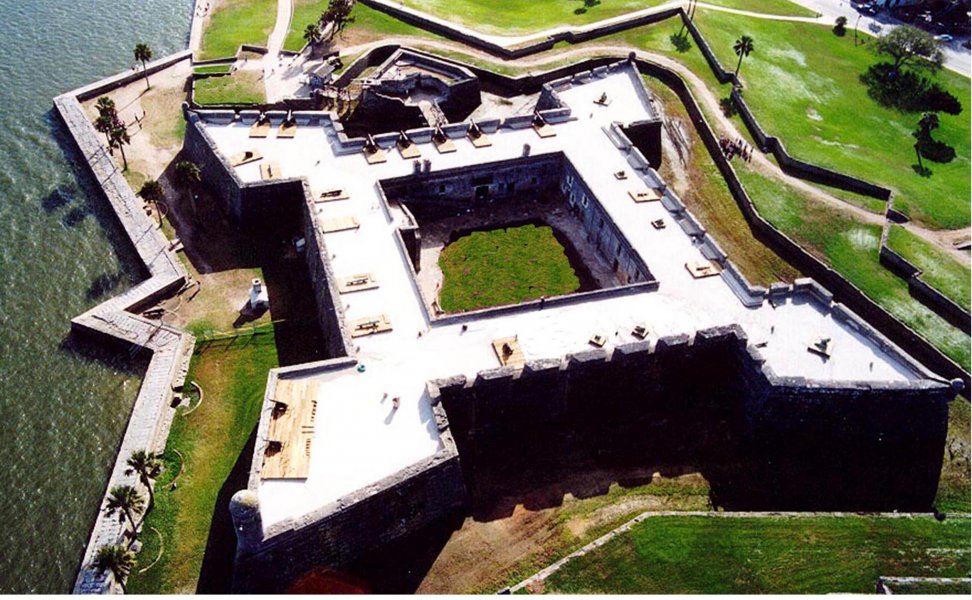 Castillo de San Marcos, the oldest fort in the United States, was constructed between 1672 and 1695 by the Spanish living on Matanzas Inlet for the protection of the northern most outpost of the empire, Saint Augustine.

Castillo de San Marcos, the oldest fort in the United States, was constructed between 1672 and 1695 by the Spanish living on Matanzas Inlet for the protection of the northern most outpost of the empire, Saint Augustine. Surrounded by a moat and constructed of a shell stone called coquina, the walls stand some 30 feet (9m) high and 12 feet (3m) thick. The massive Castillo serves as a clear reminder of the strength of the early Spanish colonial empire in the New World.

Previous wooden built versions of the fortress had not proved useful but the coquina constructed walls were tested and withstood attacks by a British force lead by James Moore only seven years after the fort's completion. Later in 1740, British General Oglethorpe fired cannon balls on the Castillo from Matanzas bay for 27 days without being able to penetrate the immense walls built out of the newly discovered coquina.

The Castillo played an important role in the Spanish-English struggle for the Southeast between 1650 and 1750. Beginning in 1763, the Castillo de San Marcos came under British control and remained so for twenty years until Great Britain ceded Florida to Spain at the end of the Revolutionary War in 1783.

The Castillo later served as a military prison after the U.S. acquired Florida in the Adams-On's Treaty of 1819. The name was changed by the Americans to Fort Marion. The Confederacy took control of the fort at the beginning of the Civil War without a fight. Union troops, in March of 1862, retook the fort after Confederate troops had withdrawn and the city of Saint Augustine and the fort were retaken, for the second time, without firing a shot. The fort was retired from active duty in 1899.

The twenty five acre site, located in historic downtown St. Augustine, was established as a National Monument in 1924. In 1942, in honor of its two and a half centuries of Spanish heritage, the name of the fort was changed back to the Castillo de San Marcos. The American Society of Civil Engineers designated the Castillo a Historic Civil Engineering Landmark in 1975. This popular tourist attraction is co-managed by National Park Service along with the Fort Matanzas National Monument.

Here is video from YouTube that shows the location and the cannon fire demonstration.

It wasn't until 1833, fifty years later when Castillo de San Marcos was under American control, that the truth was inadvertently uncovered by a curious American officer, Lieutenant Tuttle. He was studying the architecture of this place, and was puzzled when he found a hollow sound in one of the walls of the dungeon area. When he removed the first brick, a rush of air, smelling like a strong perfume flowed swiftly into the room. After taking down the wall, he found the hidden room, and two skeleton remains of two former prisoners, chained to the wall. It is thought that Captain Marti had Dolores and Captain Abela chained and entombed here to end their lives. Probably at least some of the guards on duty were in cahoots with the Colonel, and this dastardly deed of revenge went undiscovered. Leave it to an American soldier to find out the truth!


There are several real ghosts that seem to haunt the Castillo de San Marcos in St. Augustine, Florida. Locals refer to this immense structure as the "Old Fort". The actual construction of this beautiful fort started on October 2nd in the year of 1672. More than three hundred years later, it still stands and displays the history of the "Nation's Oldest City". Today, many ghost stories and legends surround this fort, and many different types of unexplained phenomenon have occurred here. In this article, you will be introduced to some of the real ghosts of the structure, as well as some of the strange events that have occurred here.

Two spirits by the name of Mari Marti and Manual Abela are said to haunt the dungeon in which they were chained to the wall by Mari's husband, Colonel Marti, and where they eventually died. Mari and Manual became lovers while Mari was still married to the Colonel. Once her husband caught her and Manual together, he had them ordered to the dungeon and chained to the wall. For a long time, screams could be heard coming from the couple as they called for help. Eventually, the screams stopped. Today, many have claimed that they can still hear the screams coming from the dungeon. Individuals that go inside can smell perfume that is sweet in nature. It is believed that the couple still lingers here after death.

The North Tower at the old fort is said to be haunted by real ghosts. This tower was often lit by candle and lamps - especially on dark, rough nights near the sea. Today, there is no light in the North Tower. However, many locals and tourists alike have said that when there is a storm developing, or occurring, and the seas are rough, there is a light that comes on in this part of this haunted fort. The light has been investigated a number of times, but there is never anyone located insider of the tower - or anywhere near it.

Several tourists visit the Castillo de San Marcos in St. Augustine, Florida annually. There is a natural attraction to the location because of the fact that over three hundred years of history stand there. However, some people are attracted to it because of the fact that spirits are said to roam there. A number of employees and guests take pictures around the fort to discover orbs, rods, and strange mists in them. Ghost videos have been made that show what appear to be tiny lights moving around the structure and even blurs passing in front of the video camera. If you are a ghost hunter, or simply have an interest in the paranormal, you should plan a trip to visit the real ghosts of Castillo de San Marcos in St. Augustine, Florida.