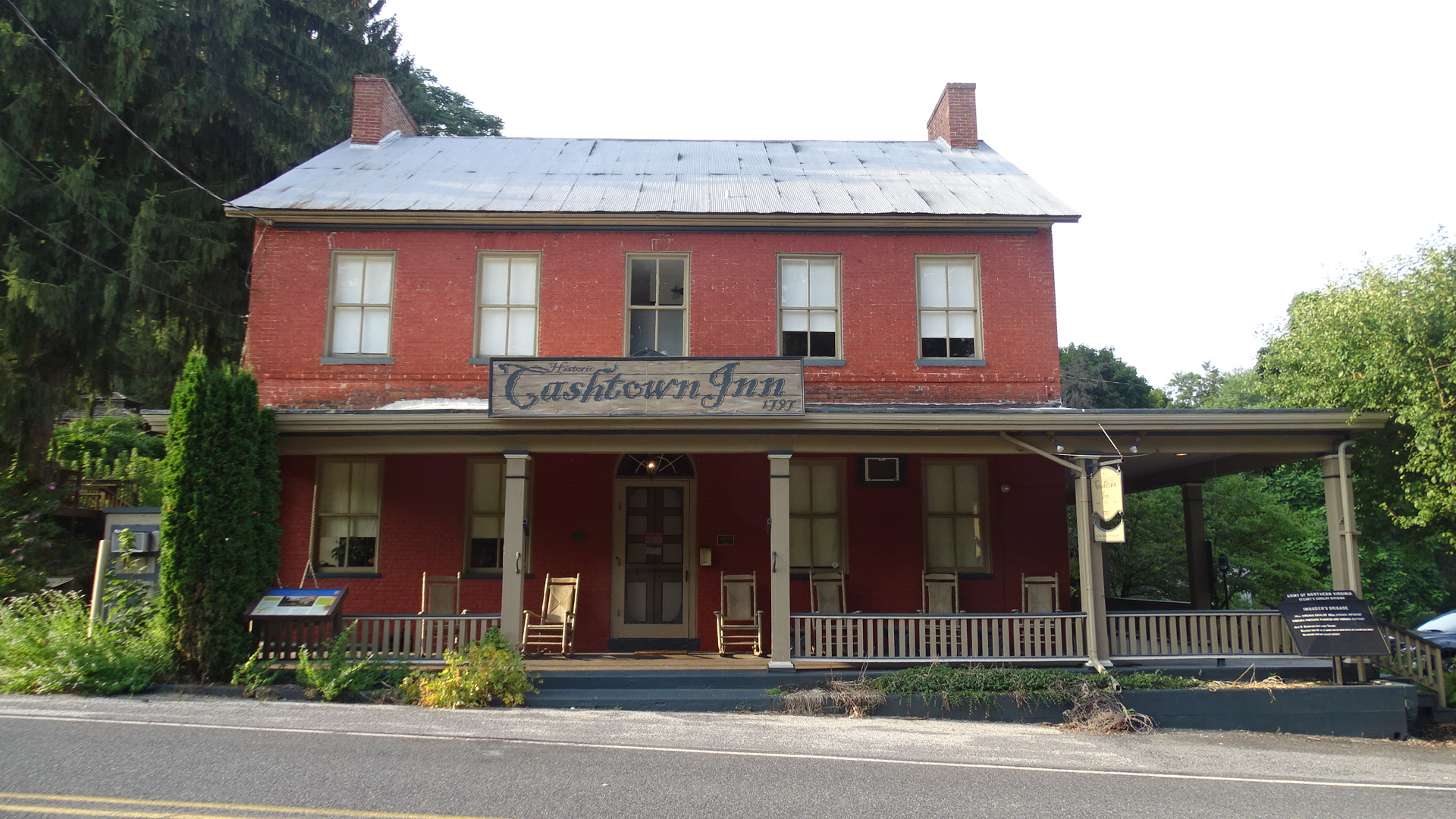 As one of the oldest hostelries in the region, Cashtown Inn had served "for the entertainment of strangers and travelers" since 1815.

Stand on the front porch of the Cashtown Inn and let your eyes roam along the gentle grade of Old Chambersburg Pike as it rises past apple orchards and open fields toward the wooded slope of Cashtown Gap in South Mountain. Then let your mind wander back to the Gettysburg Campaign in the summer of 1863, when Confederate troops filled this roadway.

To an unwary observer who stood in front of Cashtown Inn on June 29 of that year, it must have looked as if the whole Rebel army had emerged from the rough, forested ridgeline when the van of Lt. Gen. A.P. Hill's Third Corps suddenly swung into view. Their crimson banners swayed with the liquid motion of marching soldiers, who were dressed in ragged butternut and gray. A gentle breeze carried with it the noise of rattling mess tins, the clanking of swords and bayonets, and the cheerful bantering of confident veterans on parade. To Cashtown Innkeeper Jacob Mickley, who witnessed the spectacle, it appeared as if "the entire force under Lee...passed within twenty feet of my barroom."

Including a brief occupation by Confederate cavalry under Jeb Stuart in October 1862, this was the second time in less than a year that the Rebels had invaded Cashtown* (*Cashtown Inn gave its name to the peaceful crossroads village where the inn was built circa 1797. The name Cashtown was derived from the business practices of the first innkeeper, Peter Marck, who had insisted on cash payments for the goods he sold and the highway tolls he collected.)

During the Gettysburg Campaign, Robert E. Lee's Army of Northern Virginia had surged across southern Pennsylvania at will until June 28. Late that day scouts informed Lee that the Union army was north of the Potomac River and coming his way. Quickly Lee ordered his scattered army to concentrate at Cashtown, which stood strategically on his supply line back to Virginia. Within hours, legions of lean Rebel soldiers descended from Cashtown Gap and shuffled past Jacob Mickley's Inn.

As one of the oldest hostelries in the region, Cashtown Inn had served "for the entertainment of strangers and travelers" since 1815. That fateful summer of 1863, however, Cashtown Inn served hundreds of unwelcome strangers, including Confederate Gens. A.P. Hill, Henry Heth, and John D. Imboden. Suffering from a chronic ailment when he arrived at Cashtown at the head of his corps on June 29, the 37-year old Hill set up his headquarters in the relative comfort of Cashtown Inn. It was a good choice. For decades Cashtown Inn had been touted for its "healthy neighborhood; pure mountain air" and "daily bath" in fine waters from a natural spring flowing through the cellar. The cellar also included two giant brick ovens where Confederate commissaries could bake bread in abundance. (The spring and evidence of the brick ovens are visible today).

Cashtown itself was transformed into an armed camp for several days in late June and early July 1863, while the battle of Gettysburg raged just eight miles to the east. It was from there that the pivotal battle was launched when A.P. Hill sent Maj. Gen. Henry Heth's division to Gettysburg for shoes and supplies. Cashtown Inn bustled with activity during this time while Confederate officers and their staffs were quartered here. A stable located next to the Inn (but no longer standing) was used to shelter the wounded, as were many of the homes in the vicinity. Also dotting the orchards and meadows surrounding the village were hundreds of Lee's supply wagons and the cannons and carriages belonging to his artillery reserve.

Lee used many of these same vehicles to transport his wounded back to Virginia following his defeat at Gettysburg. Commander of the 17-mile long wagon train of misery, Brig. Gen. John Imboden made his headquarters at Cashtown Inn. On July 4, Imboden wrote, "About 4 pm the head of the column was put in motion near Cashtown and began the ascent of the mountain in the direction of Chambersburg." It wasn't until the next day when Imboden passed over South Mountain with the last of the wagons that peace returned to Cashtown.

(In previous) decades Cashtown Inn has been on the declining end of almost two centuries of service. In 1948 a by-pass constructed on a segment of the Lincoln Highway (Route 30) relegated Cashtown Inn to the backwash of tourist traffic. The Inn fell to disrepair and some ill-repute. Not long ago, for example, a previous owner of this Civil War landmark had considered sub-dividing it into low-income apartments.

Preservationists take heart, though. (t)hanks to the tireless efforts of ... (former) owners Charles "Bud" Buckley and his wife Carolyn, Cashtown Inn is back, and is once again providing for the "entertainment of strangers and travelers."... - George F. Skoch

Hauntings seem to emerge at every corner in the Cashtown Inn. One of the rooms where a General by the name of A.P Hill lodged during the battle is said to be haunted. In many instances, visitors to the inn have reported that the rocking chair in the room will start to move on its own, with absolutely no explanation. In addition to this, several have been frightened because of the fact that it felt as if someone was on the bed with them while they rested. In other cases, knocking and other unexplained sounds have been experienced in the room.

Many individuals who work in the inn and have visited the inn have been surprised to see a man in the hallway, and also in the area of the bar. While under normal circumstances, this would not be an issue, the man that they see is transparent and is dressed in one of the old Confederate uniforms that were standard issued during the Civil War. This same man has been seen in the area that is near the bar as well. It is unknown as to whether the spirit has attempted to interact with the people he has shown himself to, or if he hasn't. However, the experience was frightening to the witnesses, regardless.

There are many other types of unexplained events that have happened in the haunted Cashtown Inn. Employees and visitors have heard strange sounds that resemble that of someone or many people walking at once when no one else was around. Even personal belongings of some of the guests have been altered, such as suitcases being packed with no explanation.


I and my husband stayed there on vacation. We had taken a lot of pictures inside and out of this lovely inn. Had a fantastic dinner there. First night spent there heard footsteps out in the hallway late at night from the Confederate soldier who walks the halls. Second night there heard the footsteps again, they approached the door to our room and stopped and then a light knocking at the door. My husband and I were in bed and waited to see if it continued. The knocking stopped and then we both heard footsteps inside our room , they stopped at the foot of our bed. Something began to lightly poke the mattress up and down along with a light shaking of the mattress. I and my husband were not doing this, we were laying perfectly still on the mattress. Then the mattress began to ripple like when you drop a pebble into a pond. I then began to feel someone lightly touch me on the shoulder, it was not my husband. We were not disappointed on the inn, dinner, room nor haunting. Highly recommend this inn. P.S. the pictures we took inside the inn and our room showed several orbs. The spirits seem to become more lively during the dates of the Gettysburg Civil war July 1, 2, 3.


As Tom and I just missed the 2:00 PM deadline to eat lunch at the Cashtown Inn, because we had spent the morning tromping around the Gettysburg Battlefield, and were delayed, so we ate our lunch at the store/little eatery down the street. Tom asked the owner and cook of this little place about the Confederate ghost at the Cashtown Inn. She related the story to us how a really upset woman had left the inn abruptly just that morning because this male entity appeared in her room and sat in the chair across from her bed.


An old picture taken across the street of the Cashtown Inn in 1895, caught the image of this male entity dressed in a confederate uniform, standing on the front porch. This picture was used in the inn's brochure.

This same apparition is seen walking around the halls and has been know to appear on occasion in a guest's room, for chuckles.

The living hear his footfalls in the attic and also gets his chuckles by knocking on room 4 in the middle of the night.