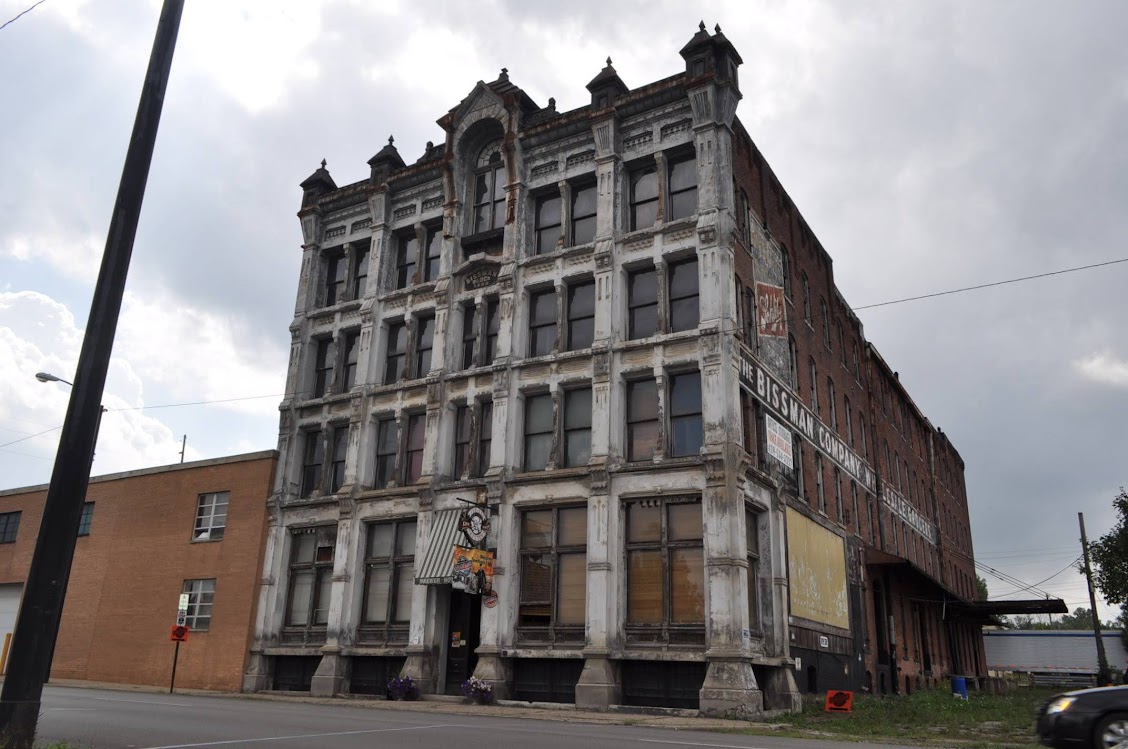 The structure was built in 1886 where Peter Bissman's expanded wholesale grocery still stands today, but not in operation.

The Haunted Bissman Building circa 1886 By Benjamin Franklin Bissman IV It all began in the late 1800's as a dream followed by a young German immigrant. A desire to voyage to America and settle in the land of opportunity was soon to become a reality. In 1872 the Peter Bissman arrived at Ellis Island, a smart, courageous businessman and by 1886, the beginning of a new heritage had began. 1886 was the year that the Bissman Building set its foundation in the busy flats of Mansfield, Ohio. The building was designed by Hancock and Dow, The same architect as the Mansfield Reformatory as stated in the National Register of Historic Places listings in Richland County, Ohio. Both built the same year. In order to maximize efficiencies and meet both deadlines, the two projects came together at the same time utilizing the latest technologies available as well as sharing labor and other resources between the two. Both sites were served by rail, making procurement of materials and equipment more cost effective. The Bissman Building is a five story Gothic structure, consisting of approximately 50,000 square feet. That was an unusually large building for its time, considering it was built for immigrants with only a small background in business the way Americans did business. The building served fine from its beginning till its functional end as a wholesale food and beer distribution center serving a 50 mile radius, providing surrounding communities with all the necessities of ordinary life in their time. At first, deliveries were made by horse and wagon, and as the industrial revolution began, our technologies kept pace with the rapid changes, from two horse power to over 300. One of the more interesting characteristics of the building, today and as far back as 1911 seems to hinge around myths and legends attached to the building, passed on from one generation to the next. Let me explain... As I write this chronology of the building, being almost 50 years of age, and the fifth generation to care for it's existence, I recall stories told to me by my grandfather as far back as the age of five years old. In order to keep me out of mischief as well as harms way, he often told me the story of one of his grandfathers employees that had lost his head in a terrible accident while riding the elevator on his last day of employment at The Bissman Company. I believe that is where the old saying that still lingers around conversations about the building "Not all employees left at the end of their shift" got its beginning.

The structure was built in 1886 where Peter Bissman's expanded wholesale grocery still stands today, but not in operation. In the early 1930s the twenty smokestacks on the north and south sides of the Bissman's filled the early morning air with the rich aroma of coffee, as its own brands Red Ban Java Blend, Steel Cut and Acme were prepared fresh each day. Downtown residents would wake to the scent of roasting coffee beans and return home at workday's end to the fragrance of roasting peanuts.

The building has an early Romantic Gothic styling and shares a haunting similarity with the Historic Ohio State Reformatory since they were both built in the same year by the same architect.

The Haunted Bissman Building aired on the SyFy Channel during a Ghost Hunter's episode in 2010!

The Haunted Bissman Building was featured in the movie " The Shawshank Redemption". It was the Brewer Hotel where Brooks, actor James Whitmore, went to stay and hung himself soon after being paroled from The Shawshank Prison. The building was also utilized in the film as the front office of the building of the Portland Daily Bugle. The Haunted Bissman Building is not open to the public traveling along the Shawshank Trail. Photos are encouraged from the outside of the building.

In 2007 the building was leased to a major film production company, the Midnight Syndicate, for the production of The Dead Matter, a vampire movie that was released in October of 2008.

The Haunted Bissman Building, nicknamed as Dead Souls Studio, has a long history of haunted activities and has hosted ghost hunters from all directions.

There are many reports of activity happening at this location, but how did it happen? There were many generations that have walked through this location. There has been horrible life ending accidents. People have witnessed black shadows skipping around, that of what we think is a child. There has been deep voices on EVP's answering questions. Could that be the foreman who still wanders the floors? Who is causing the cold spots and the touches that we feel all the time. Who is causing the footsteps and who is moving objects around? Could it be the Great Grandfather of the owner? Please say hello to the lady that walks the ground floor and go to the upper floors to play with the little girl.