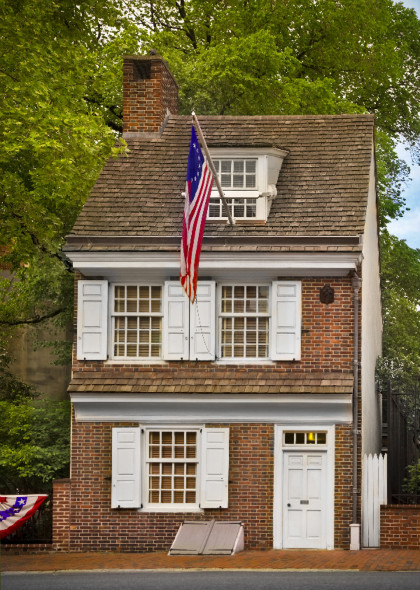 The building at 239 Arch Street, now known as the Betsy Ross House, was built over 250 years ago. The front portion was built around 1740, with the stair hall (or piazza) and the rear section added 10 to 20 years later.

The building at 239 Arch Street, now known as the Betsy Ross House, was built over 250 years ago. The front portion was built around 1740, with the stair hall (or piazza) and the rear section added 10 to 20 years later.

The structure is a variation of a "bandbox" style house, with one room on each floor and a winding staircase stretching from the cellar to the upper levels.

The building's front facade, with a large window on the first floor to display merchandise, and its proximity to the Delaware River, made it an ideal location for a business. In fact, the house served as both a business and a residence for many different shopkeepers and artisans for more than 150 years. The first floor front room was used as the workshop and showroom. The business owner and his or her family lived in the rest of the house.

In the 18th century the house was occupied by a shoemaker, a shopkeeper, an apothecary and, of course, most famously, an upholsterer. It is believed that Betsy Ross lived here from 1773 to 1785. By the 19th century, a German immigrant family by the name of Mund moved into the building and ran various types of businesses from it, including a tailor's shop, a cigar store and a tavern.

By 1876 the building was generally recognized as the place where Betsy Ross lived when she made the first American Flag. Several of her surviving family members, including daughters, grandchildren and a niece said that this was the location of the legendary event.

The Mund family took advantage of the house's interesting history by posting a sign on the outside which read: "First Flag of the US Made in this House." An 1876 advertisement for the Mund's tavern read: "Original Flag House, Lager, Wine and Liquors. This is the house where the first United States flag was made by Mrs. John Ross."

By the late 19th century most of the other colonial-era buildings that once stood on this block of Arch Street had been torn down and replaced with large industrial buildings and warehouses. Many people feared that Betsy's home would meet the same fate.

In 1898, a group of concerned citizens established the American Flag House and Betsy Ross Memorial Association to raise money to purchase the house from the Munds, restore it, and open it as a public museum in honor of Betsy Ross and our first flag.

Charles Weisgerber was one of the founding members of the Memorial Association. In 1892 he painted Birth of Our Nation's Flag, a 9' x 12' painting that depicts Betsy Ross presenting the first American Flag to George Washington, Robert Morris and George Ross.

To raise the money to purchase the house, members of the American Flag House and Betsy Ross Memorial Association sold lifetime memberships to the organization for 10 cents. Each donor received a membership certificate imprinted with an image of Birth of Our Nation's Flag. Individuals were encouraged to form "clubs" of 30 members. The person who formed the club would receive a ten-color chromolithograph of the Weisgerber painting, suitable for framing, in addition to certificates for each club member.

Weisgerber moved his family into the home in 1898 and immediately opened two rooms to the public. The first floor front room was a souvenir shop and the room in the back of the house, where the meeting between Betsy and the Flag Committee was said to have occurred, was open for visitors to view.

By 1937, structural changes and general wear and tear on the house led to the dire need for restoration work. Philadelphia radio mogul, A. Atwater Kent offered to pay up to $25,000 for the restoration of the house. Historical architect, Richardson Brognard Okie was commissioned to do the work.

Under Okie, the house's original architectural elements were spared wherever possible. Where original components could not be reused, materials were obtained from demolished homes from the same period. A small structure containing a boiler room and a restroom was constructed in back of the original house with Revolutionary War era bricks.

In the historic house, three hidden fireplaces were uncovered, the front stairway and dormer were replaced and the door leading from the kitchen to the back of the house was restored. The most notable change, however, was to the front of the house. The doorway in the front of the building was moved from the western to the eastern corner and a new window was installed. Construction was completed and all eight rooms of the house were open to the public on Flag Day, June 14, 1937.

Atwater Kent then purchased the two adjacent properties to the west of the Betsy Ross House to develop a "civic garden." The entire property, including the historic house and courtyard, were given to the city of Philadelphia in 1941.

In 1965 an annex building was added to the property and in 1974 the courtyard was renovated and the fountain added. Two years later, the remains of Betsy Ross and her third husband, John Claypoole were moved from Mount Moriah cemetery in Yeadon, Pennsylvania, to the garden on the west side of the Betsy Ross House courtyard.

In 1995, a private nonprofit organization, Historic Philadelphia, Inc., began leasing the property from the City of Philadelphia and continues to manage the site.

Today, the Betsy Ross House is furnished in the period in which Betsy Ross' descendents said she lived here. Visitors can view seven period rooms, including a kitchen, bedrooms, parlor and the only interpretation of an 18th century upholstery shop in the country. The rooms are furnished with period antiques, 18th-century reproductions and objects that belonged to Betsy Ross and her family. Highlights of the collection include Betsy Ross' walnut chest-on-chest, her Chippendale and Sheraton sidechairs, her eyeglasses, her quilted petticoat and her Bible.

From Season 5, Episode 1 of the SyFy Channel's Ghost Hunters

The team heads to the historical house of Betsy Ross to investigate reports of suspicious activity. Once they arrive at the landmark, the director of the house explained that in 1980 two security guards got into an argument in the basement of the gift shop (located next door to the house) and one was shot three times and left over night to die. Since that time, people claimed to have heard voices in that area. In the parlor of the house where Betsy Ross was rumored to have met with the US flag committee; a witness said that she felt a dark presence while in that room. A staff member heard rustling and voices come the basement of the house. And in the director's office, which is in the attic of the Betsy Ross house, one former director felt a hand grab her shoulder and another was so frightened by something that she climbed out of the window and onto the flagpole. Many believe that the presence in there is that of the former owner of the house who died in the room that now functions as an office.

To begin the investigation, Jason and Grant go to the basement of the house first, where they hear someone walking above them. Yet when Grant goes to look into what's causing the noise, he finds the room empty. Meanwhile, Amy and Kris conduct an EVP in the basement of the gift shop where the security guard was killed. Tango and Steve do their research in the parlor of the house. They try to disorganize the room's chairs and table in hopes of getting a reaction from the spirit of Betsy Ross.

In the director's office, Jason and Grant use their digital recorder to capture what sounds like a man's voice coming from the room next to them. While concluding their sweep of the house, Jason and Grant use the K2 meter in the basement that has strong reactions throughout the room. This is known as a fear cage, which is an area that's subjected to high electromagnetic fields consistently. They also hear a loud moaning sound come from near that area but did not see a culprit for the noise.