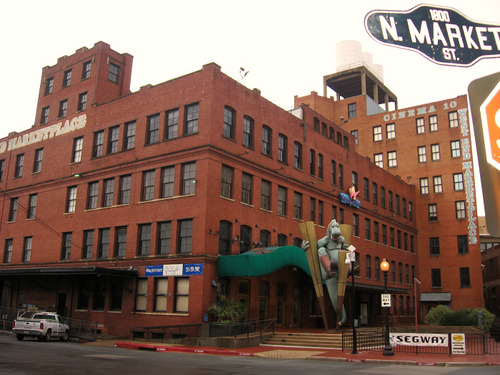 Built in 1902 for the Brown Cracker and Candy Company. "the largest bakers of crackers and fancy confections in the Southwest" - the buildings started out as a plant and distribution center for food products.

Built in 1902 for the Brown Cracker & Candy Co. - "the largest bakers of crackers and fancy confections in the Southwest" - the buildings started out as a plant and distribution center for food products.

The buildings caught fire several times, including a 1912 blaze attributed to mice gnawing on matches. When they could have dined on all those crackers?

Bonnie's beau Clyde Barrow is said to have worked at the plant for a while before turning to more profitable (at least for a while) bank robbing.

In the 1940s, Brown Cracker was bought out by Sunshine Biscuits and eventually disappeared from downtown.

Later the West End buildings were used for other types of storage and manufacturing before winding up empty in the early 1980s.

In 1986, the West End complex was renovated into Texas- first festival marketplace- remember those?

For a while the buildings also housed the Dallas outlet for theme restaurant Planet Hollywood.

But by 2006, business at the West End Marketplace had dwindled to the point the building￿s owner, a private Dallas-based real estate investment partnership, decided to shut the place down.

A 10-screen movie theater on the top floors was long closed before then.

As with any urban folklore, strange tales, paranormal stories and myths — we accept them as conjecture and rumors. While it is rare, occasionally a few can honestly come forward and accurately share their experiences with the dark side.

The ownership and management of the Fatal End in the West End are devoted to presenting the very best in dark entertainment. We are not and do not represent ourselves as "Ghost Hunters” or “Paranormal Experts." Nor are we here to prove or defend the many dark tales that may or may not have occurred in our building. We will leave it to the experts for professional interpretations.

In our development of this haunted attraction, we are constantly learning about the many bone chilling tales from this building's dark history.

Some of these findings have been shared by people who at one time were either employed at or were tenants of the building or knew people that were. Other recent findings have involved our staff, patrons, and ourselves as first hand witness.

We wonder: is there any factual basis for these supernatural legends or strange occurrences?

To our surprise, much of what has been described to us and seemed to be nothing more than ramblings has turned out to contain more than just a few grains of truth. It is this basic assumption of belief that is the driving force enabling us to conduct public tours that take our patrons beyond a forbidden passage and into a deep, dark underworld of The Fatal End at the West End.

Our building is known as the West End Marketplace and has been a major player in the downtown business community for over a century. Even in its beginnings in the early 1900s, the Marketplace was proclaimed as the centerpiece of North Texas' most vibrant business districts. Being centrally located and next to the railroad tracks, Trinity River docks and two major highways gave the building a tremendous advantage for commerce. This spectacular accessibility was the key to establishing the West End district as Dallas' original business center.

Unfortunately this accessibility was also appealing to the railroad transients, homeless and criminals. The bad elements of society found easy refuge and many benefits for development of criminal gangs, prostitution, murder for hire, and the West End's numerous warehouses, including the Marketplace, provided many deep, dark hiding places for those on the run from the law.

This infestation was a business killer, and was only the prelude to the economic devastation of the great depression. With the country broke and Americans out of work, so went many of the businesses in the West End.

It was during this period that one of the most disturbing tales of unimaginable evil is said to have happened. The story goes that one hot July afternoon, a financially down and out circus train was seized by sheriff-assisted creditors while it was stopped in downtown Dallas. Economic hard times and unpaid bills had caught up to this traveling carnival. This foreclosure and repossession of its assets led to the immediate disbanding of the show and its pennyless performers, now homeless, gained entry and took refuge in the lower floors of the unoccupied Marketplace building.

These subterranean floors were long, dark caverns that were naturally cool. During the hot Dallas summer months they were used by the railroad for short term storage of meats and other perishable freight. The railroad also used these cool lower caverns for temporary holding of body-filled caskets that were being transported across country or that were scheduled to be picked up by area funeral homes.

Upon the discovery of these stored cadavers, some of the more enterprising circus dwellers who had past dealings with the black market knew the high price that would be paid for fresh body parts. This group began dismembering the bodies and selling the hacked parts to unscrupulous buyers. These stored bodies were easy targets; the missing limbs were almost undetectable and the lower dark passages provided the perfect hide out.

As this macabre business grew, so did the demand for more body parts, but with the cooler fall weather, the railroad’s need for cool storage decreased — so went the body supply. This moved the quest for bodies from the railroads to the county morgues, autopsy labs, fresh graves, and wholesale murder.

Rumors of the racket began surfacing, but any formal investigation efforts were hampered by reluctant lawmen and elected officials, whose election year concerns were over the public reaction to such a front page story. It would be a certain disaster at the polls and for any type of economic recovery for the troubled West End business district. The excuse of "lack of substantial evidence" was all it took to keep this chop shop's carnivorous lunar activities in business.

The rumors and many unanswered question have never really gone away, and the notorious Marketplace still seems to find connections with the strange paranormal activities in downtown Dallas. Its geographic proximity and rumored involvement with the many ghostly tragedies at the Hotel Lawrence and its national prominence in 1963 when JFK was shot dead in Dealey Plaza are prime examples. Perhaps the arms-length associations was the cause for so many of the areas business to leave this troubled area for suburban locations.

A revitalization begun in the 1970s converted the old eerie brick buildings of the West End into one of Dallas' top tourist attractions. The Marketplace was again at the center of this thriving entertainment development and the West End was Dallas' "place to be."

Then suddenly in the mid-2000s, the West End began seeing fewer tourists. Tenants were disappearing as the crowds diminished. Eventually, in 2006 the Marketplace closed its doors.

From the moment we entered the building in 2010, with its terrifying lower dark passages, its glorious beginnings and all its unanswered fateful endings, we knew that whatever remained in this building wanted to work with us to create a devastating fear in the hearts of any one entering.

The spirits have cooperated with us... so far.