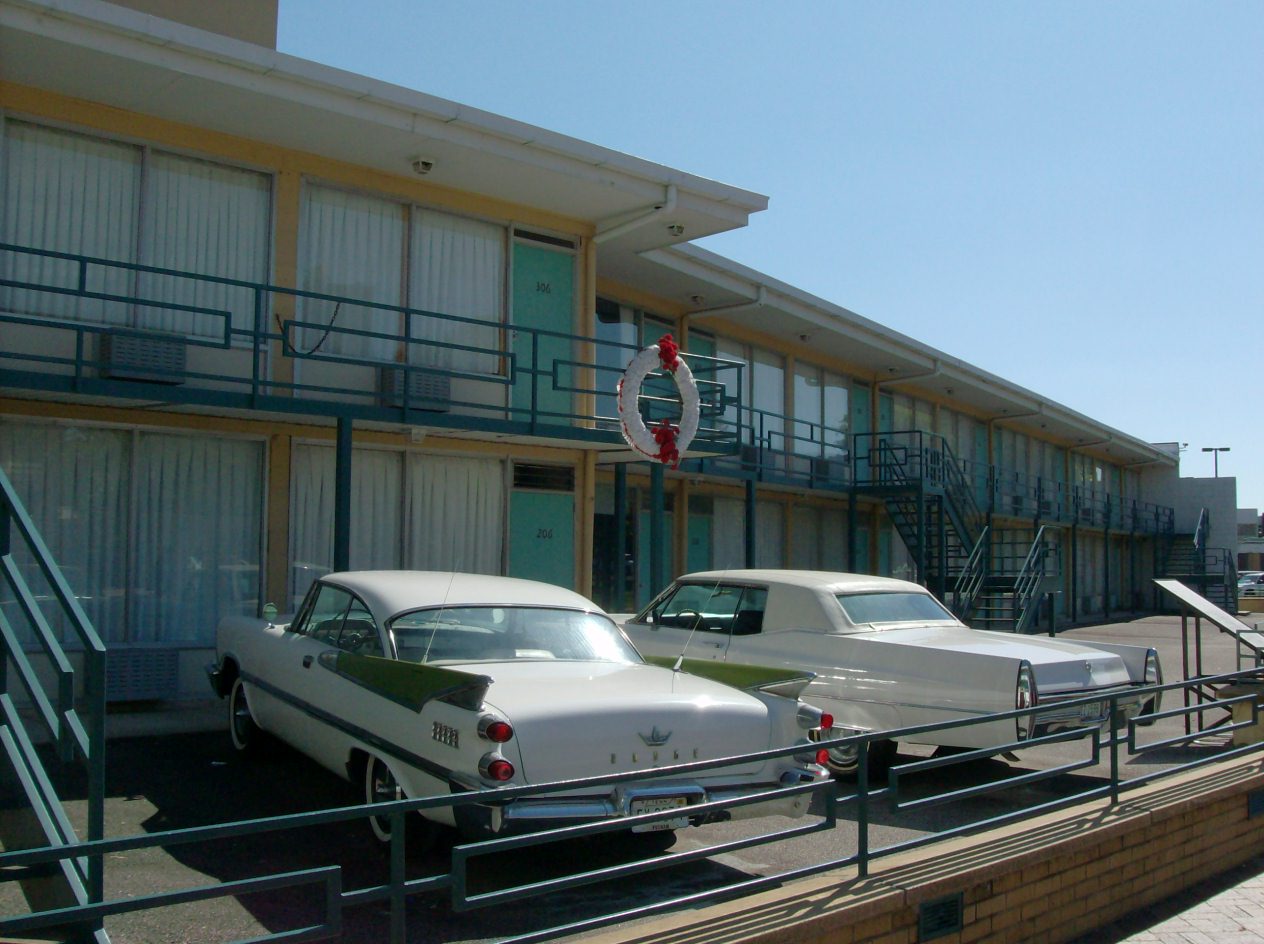 The Lorraine Motel is one of the most infamous locations in Memphis, because it was the site of Martin Luther King Jr.'s assassination in 1968.

The National Civil Rights Museum is a complex of museums and historic buildings in Memphis, Tennessee; its exhibits trace the history of the Civil Rights Movement in the United States from the 17th century to the present. The museum is built around the former Lorraine Motel, where Rev. Martin Luther King, Jr. was assassinated on April 4, 1968. Two other buildings and their adjacent property, also connected with the King assassination, have been acquired as part of the museum complex.

The museum re-opened in 2014 after renovations that increased the number of multi-media and interactive exhibits, including numerous short movies to enhance features. The museum is owned and operated by the Lorraine Civil Rights Museum Foundation, based in Memphis. The Lorraine Motel is owned by the Tennessee State Museum and leased long term to the Foundation to operate as part of the museum complex.

On October 21, 2016, the museum was honored by becoming a Smithsonian Affiliate museum.

The site began as the 16-room Windsorlorrine Hotel around 1925 and was later known as the Marquette Hotel. In 1945, Walter Bailey purchased it and renamed it for his wife Loree and the song "Sweet Lorraine".

During the segregation era, Bailey operated the motel as upscale lodging that catered to a black clientele. He added a second floor, a swimming pool, and drive-up access for more rooms on the south side of the complex. He changed the name from Lorraine Hotel to Lorraine Motel. Among its guests through the 1960s were musicians going to Stax Records, including Ray Charles, Lionel Hampton, Aretha Franklin, Ethel Waters, Otis Redding, the Staple Singers and Wilson Pickett.

Following the assassination of King, Bailey withdrew Room 306 (where King died) and the adjoining room 307 from use, maintaining them as a memorial to the activist leader. Bailey's wife, Loree, suffered a stroke hours after the assassination and died five days later. Bailey reduced the operation by converting the other motel rooms to single room occupancy for low-income residential use.

Bailey worked with Chuck Scruggs, program director of WDIA, and attorney D'Army Bailey, to raise funds to "Save the Lorraine." They worked with the Martin Luther King Memorial Foundation. The Foundation bought the motel for $144,000, following foreclosure in December 1982.

In 1984, the group changed the name of their organization to the Lorraine Civil Rights Museum Foundation. The Lorraine finally closed as an SRO motel on March 2, 1988. Sheriff's deputies were needed to evict the last holdout tenant, Jacqueline Smith, in preparation for an $8.8 million overhaul. Bailey died in July 1988, before getting to see the results of his efforts to establish the museum.

The Foundation worked with Smithsonian Institution curator Benjamin Lawless to develop a design to save historical aspects of the site. The Nashville, Tennessee, firm McKissack and McKissack was tapped to design a modern museum on those portions of the grounds that were not directly related to the assassination.

The Lorraine Motel is one of the most infamous locations in Memphis. Why? Well, because it was the site of Martin Luther King Jr.'s assassination in 1968. The motel is now part of The National Civil Right Museum that sits opposite and it has not been touched since the day of the assassination. When we say untouched, we mean it - the bedsheets are still rumpled, there are cigarette butts in the ashtray and Dr. King's car is still in the parking lot! Visitors to the hotel say that they get a very uncomfortable feeling, especially in the area where Martin Luther King lay dying. Is this an indication that his spirit still lingers, or simply a residual haunting caused by what was a national, if not global, tragedy.