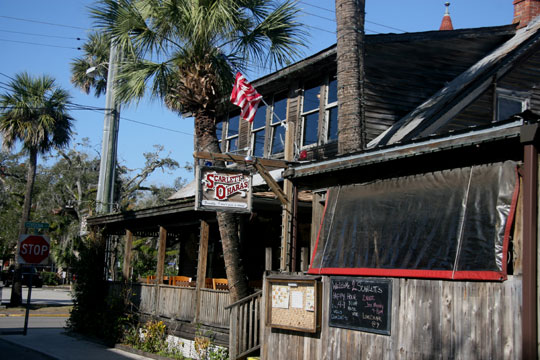 Gathering place for a bustling crowd with a schedule of live music plus casual BBQ fare & drinks.

Scarlett O'Hara's Bar and Restaurant is made up of two 1879 homes put together to create one eating and drinking establishment, that also offers live music. The building is a quaint, two story, brown wood structure, with a wide porch on the first floor where customers can enjoy a meal and a drink.

They have three bars and a restaurant, though food can be ordered in the bar areas: the Main Bar and the Oyster Bar are on the first floor. The martini bar, known as the Ghost Bar and the official restaurant as well are located on the second floor. The inside walls are decorated with Gone With the Wind stuff, as well as a picture of Mr. Colee, the man who was the creator of one of the original homes.

Scarlett O'Hara's Bar and Restaurant offer great drinks and a variety of food, ranging from traditional bar food, to full course dinners. This establishment is a very popular place of fun for twenty-somethings and older, offering a lively night life, with great entertainment; presenting not only live bands, but chances to sing Karaoke!

These two houses were built 18 years after the Civil War in 1879. One house was lovingly created by a Mr. Colee for his fickle, not so nice fiancee, and the other house was built by a retired Lighthouse keeper. Though Mr. Colee died soon after marrying his real true love, his family lived in the two story house until 1955. It was boarded up for almost 20 years.

In 1979, entrepreneur Kevin Finch bought Colee's house and the one next to it. He connected the homes, did some major renovations, turning what was then two fixer-upper opportunities into a popular place for food, drink and entertainment, in an ideal location; being very close to Flagler College.

In 1998, John Arbizzani bought Scarlett O'Hara's Bar and Restaurant, inheriting a thriving business, and its resident ghosts as well! He has learned to live with them and tolerates their attempts to get some chuckles, or enjoy their memories. Mr. Colee is accepted as a resident that belongs there and is even given a Christmas stocking!

In 1879, Mr. Colee built one of the houses as a wedding present for the woman who he thought was the love of his life. Imagine his disappointment when this woman dumped him for another man, a soldier who was stationed at Fort Marion. Fortunately Mr. Colee found another woman to love and marry and they moved into the home he built for his first unwise choice for a wife. Not long after his marriage, he was found dead in the bathtub; drowned. At first it was thought he killed himself. But after looking at the evidence, wiser minds later came to the conclusion that Mr. Colee's drowning wasn't an accident or a suicide; he was murdered. It was theorized that Mr. Colee's marriage had ticked off his first spiteful fiancee, who probably asked her new husband to kill Mr. Colee in the bathtub, helping him drown. There was no CSI experts at this time, so it is very probable that Mr. Colee's murderer was never brought to justice in his lifetime.

The entity of Mr. Colee - Seems to enjoy the fun that people have in this bar and restaurant.

Mischievous and friendly, this entity likes to play jokes and show off for chuckles up on the second floor Martini Bar, also called The Ghost Bar!! He seems to be very pleased indeed that someone rescued his house from the wrecking ball, making a place for people to meet and have fun!

This entity has been known to trigger the burglar alarm, and startle the policemen who rush into the building, looking for the culprit. He loves to get a reaction by twirling the chairs, and by touching the startled brave men in blue!

He likes to touch men on the shoulder while they visit the men's bathroom, and breathe hot air down their shirts, chuckling as these men leave in a hurry, wide-eyed.

He loves the candles that are lit for atmosphere upstairs. Sometimes when the bartender goes up to light the candles for the evening, the candles had already been lit.

The entity of Mr. Colee has found ways to amuse himself; He plays with the air conditioner, the heater and loves to surf on the TV.

Late at night, guests and staff who are up in the "Ghost Bar" upstairs, have heard the sounds of splashing water and the low moans of Mr. Colee, coming from the men's rest room there.

The second male entity - seen on the first Floor.

This entity is enjoying the bar area, and has been seen pulling out a bar stool and sitting down before vanishing.

This entity also has been seen by the closing-time staff, walking around the first floor.