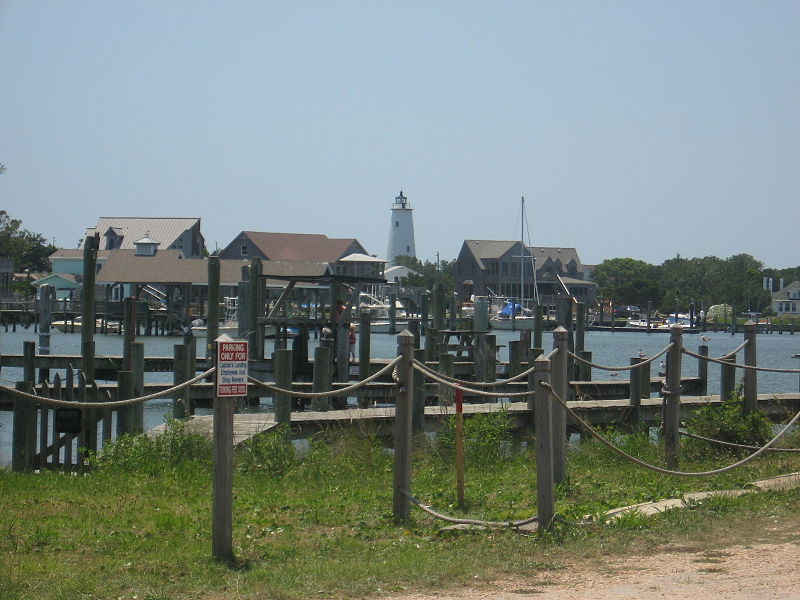 Ocracoke is a census-designated place (CDP) and unincorporated town located at the southern end of Ocracoke Island, located entirely within Hyde County, North Carolina. The population was 948 as of the 2010 Census.

The Outer Banks area was occasionally visited by Algonquian-speaking Native Americans, but was never permanently settled. Ocracoke, then called Wokokkon, was used as a subsistence hunting and fishing ground for the Hatterask Indians. Yaupon Tea or Black Drink, made from the dried leaves of the indigenous yaupon, a native holly, was used ceremonially by the Native Americans in the area. A small village on Hatteras Island is said to have had forty fighting men. The area was first described in detail by Giovanni da Verrazzano, an Italian navigator, in 1524. Verrazzano was unable to navigate the tortuous channels leading into the Pamlico Sound and assumed that China lay beyond the Outer Banks.

In 1585, Sir Walter Raleigh's colony, in their ship the Tiger, in search of Roanoke Island collided with a sand bar in Ocracoke Inlet and were forced to land on the island for repairs.

An attempt at an English settlement was tried at Roanoke Island in the late 16th century, but it failed. This effectively halted European settlement until 1663, when Carolina Colony was chartered by King Charles II. However, remote Ocracoke Island was not permanently settled until 1750, being a pirate haven at times before then. It was a favorite anchorage of Edward Teach, better known as the pirate Blackbeard. He was killed in November 1718. The grounds of what is now the Springer's Point Nature Preserve were said to be the pirate's favored hang-out during those days.

Throughout the mid-to-late 18th century, the Island was home to a number of especially skilled schooner pilots, who could get smaller ships through the inlet to the Pamlico Sound. As population increased on the mainland, demand for transshipment of goods from ocean-going vessels increased. The population was listed as 139 in the 1800 census. Warehouses were built to hold goods off-loaded from larger ships offshore and then loaded onto smaller schooners to be delivered to plantations and towns along the mainland rivers.

By the late 19th century, the shipping business was gone, and the United States Lifesaving Service became a major source of steady income for local men. Fishing, including charters for tourists, became more important to the livelihood of the area.

The Ocracoke Historic District, Ocracoke Light Station, and Salter-Battle Hunting and Fishing Lodge are listed on the National Register of Historic Places.