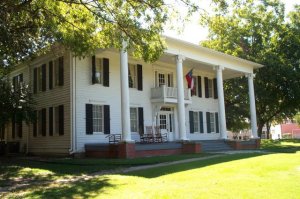 Over the years, the Millermore Mansion began to crumble and was headed down the road of demolition by the city of Dallas. In 1968, a group of Dallas citizens called the Dallas County Heritage Society stepped in and saved the mansion and begin to have it r

The Millermore Mansion is located in the Dallas Heritage Village. The village is situated in a place called Old City Park that has a collection of historic buildings and homes that visitors can tour. One of those historic buildings is called the Millermore Mansion. The Millermore Mansion is named after the family that lived in the home for over one hundred years. In 1855, a man named William Brown Miller constructed the mansion and finished the completion just as the Civil War broke out. William Brown Miller was one of the most prosperous cotton planters and slave-owners in the Antebellum South.

An adjacent house near the Millermore Mansion is called the Miller Log House. The Miller Log House was built in 1847 by William Brown Miller and his salves. The log cabin was created from real cedar and oak trees and was a temporary residence for William Miller until construction on his mansion could begin in 1855. Once Miller moved into the mansion, his slaves were given the log cabin as shelter.

The Millermore Mansion is a two-story home that is considered by paranormal experts to be haunted. Paranormal investigators have become increasingly interested in the eerie incidents that have allegedly occurred at the Millermore Mansion. Visitors, volunteers, and staff of the home have reported seeing the spirit of a woman present near the master bedroom of the mansion. Countless claims of visitors experiencing a presence or apparition have been recorded over the years. The most popular and interesting aspect of the Millermore Mansion is its reported haunting. The haunting of the mansion has been of special interest to numerous groups, locals, and tourists over the last thirty years. The mansion has even been featured on a science fiction television program called "Ghosthunters" where paranormal investigators use different mechanisms to detect the unseen activity of possible ghosts.

Over the years, the Millermore Mansion began to crumble and was headed down the road of demolition by the city of Dallas. In 1968, a group of Dallas citizens called the Dallas County Heritage Society stepped in and saved the mansion and begin to have it restored and reserved as a historic building. By 1969, the Millermore Mansion opened as the first restored historic building in City Park. To date, it is the largest remaining historic mansion in the city of Dallas.

Visitors who tour the Millermore Mansion feel as if they have stepped back in time. The mansion is well preserved through its structure and original furnishings give the ambiance of a home occupied by pioneers on the edge of the Civil War. The Millermore Mansion is built in a Greek Revival style and is two stories tall. Gorgeous antique furnishing from the Civil War period grace the home with its beauty. Fireplaces, old lamps, and wooden chairs and tables are placed carefully throughout the mansion. Group and individual tours of the home are available for a fee. The tour fee includes viewing several of the historical homes and buildings located in the Dallas Heritage Village.

Millermore, now located in Old City Park, is a two-story tall Greek Revival mansion - the only antebellum structure of its kind still standing in Dallas County. It was built and named for William Brown Miller, one of Dallas County's most successful cotton planters, stock-raisers, and slaveowners. Miller, who owned 7,500 acres of land in what is now Oak Cliff, also operated a ferry service on the Trinity River.

Miller came to Texas from Kentucky in 1847. His first home in Dallas County was a log cabin that sat on a hill on the south side of the Trinity River, overlooking Dallas, which was then little more than a collection of crude log dwellings. Miller's cabin boasted glass windows, reportedly the the first in the county.

Construction of Millermore began in 1855 on the same spot where Miller built his log cabin, a bluff in the vicinity of present-day Bonnie View Drive and Illinois Avenue. The mansion was completed in 1862.

By the mid-twentieth century Millermore was crumbling. It was rescued in 1968 by a group of citizens who banded together to have it moved to Old City Park. It was the first of many other older structures saved from demolition that now make up the park's collection of structures.