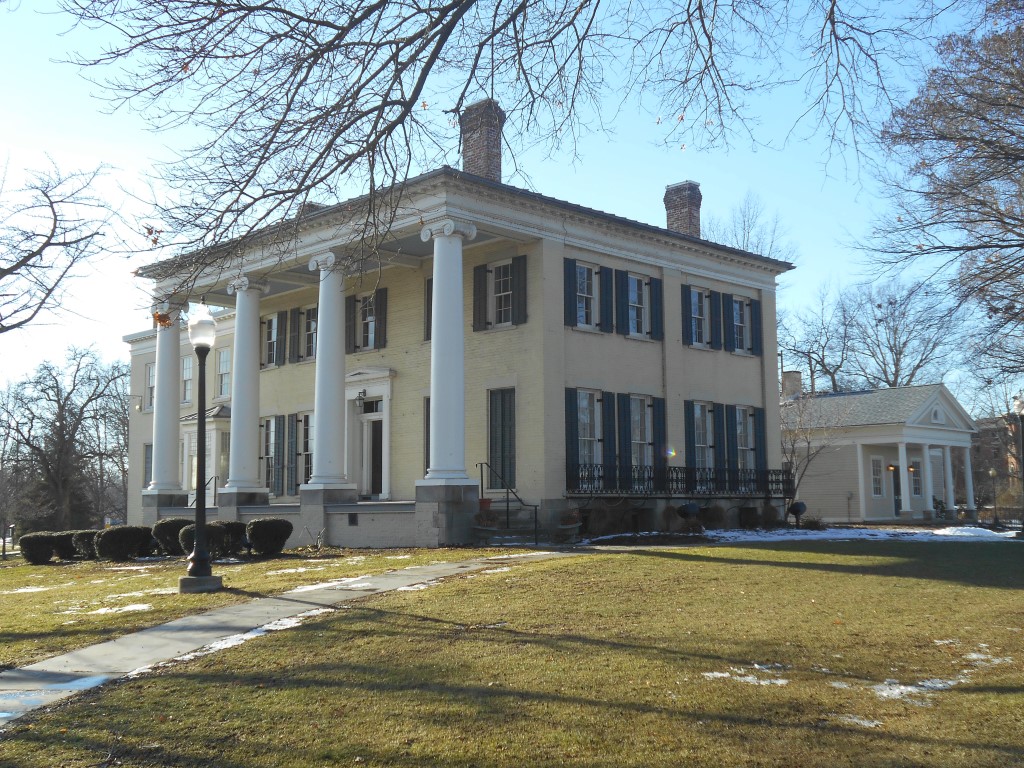 The former home of Judge Frederick Kinsman. The house started to be built in 1832, and as finished by 1834. By master mason Isaac Ladd.

Olive passed 9/13/1838 she was 29 when she died. I haven't had any success with finding her cause of death for her, as well as the children. Frederick worked with his uncle/father-in-law Simon Perkins at The Connecticut Land Company. The office right next to the Kinsman house. Frederick remarried to Cornelia Peace 3/25/1840. Together they had 5 sons Frederick, John, Thomas, Charles, & Henry .Henry was the youngest and the first of his siblings to pass in 1889. Whom was not 30.

Cornelia Peace Kinsman was a relative of President U.S. Grant. The president and his father Jesse Grant also came to visit this home. Frederick Jr. and John both served in the Union Army and during the Civil War. There was a care taker that was their at the house , Greely Thoms. Whom took care of the property and gardens for many years. Thomas eventually was the last of the family to live here.

The house had stayed in the family until it was donated to Hiram College in 1932, by a surviving daughter-in-law Emily Kinsman the house was deeded to Hiram college by 1934. To help Dana School of music. So they could be affiliated with an accredited college. This was during the time of the great depression. Enrollments weren't being met. By 1938 the house was sold to Trumbull Co. For $26,500. It was then used as a court house annex to house various county offices during the next three decades. Including the county Board of Education. And the county superintendent of schools.

Today the house is being maintained by The Warren Heritage Center. As a historical museum.

Built in 1833 by Frederick Kinsman. Had a basement and 2 stories. A brick addition to the North was Built in 1846, replacing the former kitchen wing. A frame addition providing a wood shed and 3 servant rooms was added and 1860. The building is of early colonial type of architecture. The main portion in the 1st edition is a brick. Hand wrought iron railings, and important florentin class, sidelights and transform of front door adorn the building.

The gardens were the most beautiful in Warren.

Frederick Kinsman was born March 4th, 1807. He attended Plainsfield Academy, and was engaged in business with his Uncle Samuel Perkins in the Connecticut Land Company, until elected judge and 1845.

He had attended the National Republic convention as a delegate in 1864. President Garfield was a frequent visitor at the Kinsman home, and was assisted in his political career by said, Frederick Kinsman.

The building was deeded to Hiram college by Mrs. Thomas Kinsman, heir of Mr. Frederick kinsmen.

On a more haunting note. The house was built on The Perkins farm land. Simon and his wife Nancy Anna Bishop Perkins together they had 9 children. There are no living descendants today. He worked for the Connecticut Land Co.

In 1807 he established a mail route to Detroit by negotiations with native American Tribes. In 1808 Perkins became a brigadier general in the Ohio militia. In the war of 1812, he defended northwestern portion of Ohio from native American and British attack after General Hulls surrender of Detroit in the fall of 1812. He commanded. Approximately 400 men.

Obviously he wasn't a friend of the Native Americans so in my opinion I think Simon Perkins was cursed. Not only does he not have any living descendant today. But from my research I have found that most of the residences held by a Perkins's has paranormal claims. For example Henry Bishop Perkins house ( City Hall) . The Upton House was once a Perkins farm house. The Kinsman house and The Stone Mansion in Akron. All have paranormal claims to them. I can attest to there being activity in the Kinsman House.