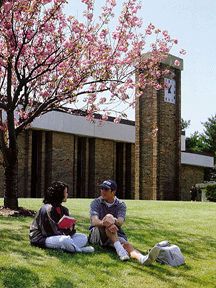 In 1954, Kent State University initiated a cadet program to help the community overcome a critical shortage of elementary teachers. Until the Fall of 1965, the University offered an evening program at Warren G. Harding High School, known as the Warren Aca

In 1954, Kent State University initiated a cadet program to help the community overcome a critical shortage of elementary teachers. Until the Fall of 1965, the University offered an evening program at Warren G. Harding High School, known as the Warren Academic Center.

By 1965, this operation had been expanded to include many courses other than those required by prospective teachers. The Warren Academic Center was granted campus status by the legislature in 1965, and became the Trumbull Campus of Kent State University.
In December of 1966, the Trumbull County Commissioners offered to deed a 134.7 acre site to the University for a branch campus. By June of 1968, preliminary plans for a new campus facility were approved by the State, and completion of the building was targeted for 1970. With almost 800 students enrolled, the campus continued to operate in 1969 and 1970 in four leased facilities in Warren. The Fall of 1970 saw classes begin in the long-awaited facility, with approximately 1025 students, and high hopes for the future.
Seeing a need to meet the growing technical training needs for business and industry, the Trumbull Campus established a Workforce Development and Continuing Studies Center in 1996. As partners in progress, the campus has provided technical training for over 4,000 employees, representing 33 companies since the Center began. The Center for Industrial Training and Education (CITE) was established in 1997 to provide hands-on laboratory experience for customized training programs, apprenticeship coursework, academic engineering courses and Tech Prep programs. The workforce development training programs include employee training, pre-employment training in partnership with the university, business and industry and local/state governments.

A Weekend College Program began in Spring 1998, leading to a B.S. Degree in Technology. Several Environmental Technology initiatives were in operation from 1999 to 2002; the establishment of the Center for Environmental Technology and Applied Research; a partnership between Kent Trumbull and the 910 Air Wing Aerial Spray Unit; and an environmental training program for the University at Tashkent in Uzbekistan.
The new millenium was brought in with the completion of two new facilities for the Trumbull Campus. The 68,000-square foot Technology Building was designed to support a variety of technology degree programs, including three new associate programs that began in the Fall of 2000 including Laboratory Technology, Plastics Manufacturing Engineering Technology and the High Technology Manufacturing Degree. The Workforce Development and Continuing Studies Center allowed for the expansion of programs and services available to the surrounding communities. The Center's program offerings include certification for professionals, workshops on business-related issues and personal enrichment classes.
Today, Kent State Trumbull spans 438 acres with three academic buildings occupying 246,500-square feet of space; in addition to a spectacular two-acre natural resource in Lake Anne. Kent State Trumbull is an open-admission campus of nearly 3,000 students, 134 full and part-time faculty, 50 administrative and support staff and a $12-million dollar annual operating budget. Programs are offered at the freshman and sophomore levels in 170 majors, along with 18 certificate and 15 associate degree programs, with junior/senior level course work for Baccalaureate degree completion in Nursing, Justice Studies, Technology, Business Management, English and General Studies. A Masters degree program in Technology is also available.
The campus is also home to the Ohio Basic Police Academy and a Corrections Training Facility. Kent State Trumbull is part of the eight-campus network of Kent State University, a Doctoral Research University-Extensive Institution.

Night workers on the campus hear all kinds of knocks and tapping noises. After checking everything in the building, checking for both people and mechanical problems, but could not find an explanation. A medium who was called in indicated that the campus had been built on what was formerly the grounds of a retirement home. The campus is haunted by those who passed away there. The noises heard could be tapping canes and walkers. The theater on campus is haunted by the apparition of a woman in blue. She is seen sitting outside the theater lobby. Some people have reported feelings of being watched and hearing footsteps.