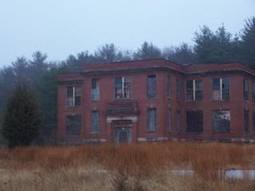 The Joseph P. Ladd Center is an abandoned mental institution on a 331 acre parcel. It was purportedly started as a school for misfits or mentally handicapped individuals in 1908.

The Joseph P. Ladd Center is an abandoned mental institution on a 331 acre parcel. It was purportedly started as a school for misfits or mentally handicapped individuals in 1908. The Ladd School was started as a farm colony where patients were housed in small cottages rather than in large institutions that developed later. The patients did small chores, farming, and later making clothing or other household items. The facility was closed as an insitution of the state in 1993. In 1997, the Rhode Island Economic Development Corporation was charged with the redevelopment of the former Ladd School property.

The Dr. Joseph H. Ladd Center was Rhode Island's only custodial institution designed specifically for people with developmental disabilities. It existed for 86 years, opening in 1908 and closing in 1994. According to the official discharge record, 3,662 people with disabilities lived there - some voluntarily and others not - throughout the course of its history.

CLICK THE SOURCE LINK BELOW THIS ENTRY FOR A COMPLETE HISTORY TIMELINE.

Many people believe that the Joseph P. Ladd Center is very haunted. Some of the people who have visited the abandoned buildings here have witnessed paranormal activity taking place. Some of these trespassers have been sent running by the spirits here others have stayed to experience the strange activity occurring here. People say that as soon as you enter the site you get chills up and down your spine and an overwhelming feeling that your being watched by someone or something. To get into the buildings, trespassers usual have to squezze through the windows and sneak in. People have heard strange noises throughout the Ladd Center. On a few occasions strange voices were heard coming from an empty area where nobody was. A few visitors were even attacked by an unknown entity and had things they were holding knocked out of their hands. People have seen ghost here a number of times. One man claimed to see the spirit of a little girl. When he went to approach her, the little girl just disappeared right in front of him. On another night, a different man claimed he also seen a ghost, this time a woman spirit who was floating through the hallway.