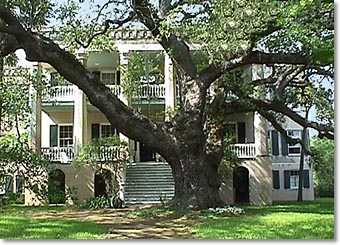 The Castle was built for Dr. Joseph Fickling Johnson by J. S. Cooper, a local builder, according to an agreement signed December 5, 1859

"The Castle" was built for Dr. Joseph Fickling Johnson by J. S. Cooper, a local builder, according to an agreement signed December 5, 1859. The contract was completed on August 8, 1861, however some elements of the house, notably its porch railings, mantelpieces, and ironwork are reported to have been caught in the Union naval blockade and never reached the site. Bricks for the house are reported to have been made on Dr. Johnson's Lady's Island plantation near Brickyard Point.The house was confiscated during the Civil War and became part of Hospital #6. Dr. Johnson, unlike many of Beaufort's pre-war residents, was able to reacquire the house at the end of the war upon payment of $2,000 in taxes.

The house remained in Johnson's family until 1981. The house is Italian Renaissance in feeling, and is said to be almost an exact copy of one in England, destroyed during World War II. Constructed on a crib of palmetto logs, the walls are of soft brick covered with a thin layer of plaster. The color is muted and changeable, in shades of gray, tan, and pink, subtly shifting with the light. Six massive columns support the double portico, with balusters between that enclose the upper and lower porches. The decorated parapet is five feet high, with four triple chimneys towering above it. Long French windows, some of the seventy-nine window in the house, flank the front doors, upstairs and down.

The interior walls are solid brick, plastered, and the double stairway is one of the widest in the country. Some of the original mantels have been replaced by Regency ones rescued from an old Beaufort house being demolished. The house, one of the most photographed in America, occupies a full city block and is set amid lush gardens with hundreds of azaleas and camellias. It faces a great bend in the Beaufort River, and giant live oaks guard the front and back. Many of the specimen trees and shrubs in the garden were planted by Dr. Johnson, including a pair of ancient olive trees, brought from the Mount of Olives in the Holy Land. A former director of the National Trust for Historic Preservation called it "One of the great houses of the South Carolina coast." He spoke of "the extraordinary grandeur of the almost medieval house . . . its air of somber mystery, set in great oaks at the water's edge."

The Castle Legend states that the explorer Jean Ribaut brought with him a jester, a dwarf named Gauche. He`s been sighted walking on the shadowy grounds of the house, and some say they`ve seen him inside while touring the historic home.

His ghost is still said to inhabit "The Castle" (411 Craven Street, Beaufort), a home built in the 1850s by Dr. Joseph Johnson. When Federal troops occupied Beaufort in 1861, the still-unfinished Castle became a military hospital. The outbuilding did duty as a morgue, and the grounds surrounding the house may very well have served as a graveyard. Did these macabre circumstances draw the spirit of the Huguenot ghost from his own grave and bring him to the Johnson House?

Soon after the house was completed, the gardeners reported many apparitions. The doctor himself said that he once saw the dwarf walk outside the house. Johnson’s daughter, Mrs. Lily Danner, was reported to have said that she saw the specter of Gauche many times when she was a child. The wrinkled old elf of a ghost would join Lily at the tea parties that she held for her dolls in the basement of "The Castle", dressed in his colorful jester’s blouse, hose stockings, pointed shoes, and cap and bells. In a June 1940 interview in Harper’s Bazaar magazine, however, a "Mrs. Danner" (no first name given) attested that Gauche himself was never really visible, but that it was "only by table tipping that we find him. Whoever taps, it’s always the same person who answers." The ghost taps out coded messages in 16th-Century French and, according to Mrs. Danner, " ... always swears and uses words the same way. He has no opinion of anyone. He called one of the family a hellion one night. She never listened in after that." Mrs. Danner’s brother called Gauche "a rough little customer" who "always swears" and "has no opinion of anyone." Houseguests have reported that Gauche is something of a poltergeist. Who moves furniture and opens and closes doors in the night, all to the sound of bells.

The Danners had trouble understanding Gauche at first. Only by writing down the tapping code and finding someone who could translate Gauche’s archaic French could they eventually communicate with the ghost. In Tales of Beaufort, Nell S. Graydon told of how Gauche spoke out (in English) to a Castle houseguest one stormy evening. Here is a "transcript" of that conversation:

GAUCHE: This is Gauche.
GUEST: What are you doing here?

GAUCHE: I live here -- in the cellar.

GAUCHE: It reminds me of my English home that I will never enter again.

GUEST: Will you let me see you?

GAUCHE: No, I do not show myself to fools.

Other houseguests, however, have seen a wisp of fog or mist rise out of the tidal creek beside the house just after a chilling breeze blew past.  The wisp would move slowly toward the Castle, take human form, then disappear into the night.   The ghost has reportedly left his red hand prints on the house’s windows as well.