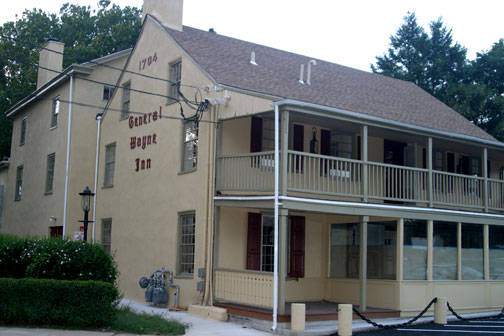 The General Wayne Inn building was built on land purchased by William Penn. Originally called The Wayside Inn, this building has been continuously used since 1704.

The General Wayne Inn building was built on land purchased by William Penn. Originally called The Wayside Inn, this building has been continuously used since 1704, when a Quaker, Robert Jones, went into the Inn/restaurant business, with the idea to serve travelers going to and from Philadelphia and Radner, on the old Lancaster road way. The Wayside Inn became The General Wayne Inn in 1793, when it was renamed after a local Revolutionary hero. Because of its location, near Merion Station, many Revolutionary War battles were fought around the area of the Inn. Thus, this Inn has the distinction of playing host to American Patriots, such as General George Washington and Marquis de la Fayette, and to the British Redcoats and their hired, Hessian soldiers as well.

During the 1800s, many vacationing Philadelphians came to the area, and enjoyed fine dining at The General Wayne Inn, such dishes as Squirrel Ragout and Pigeon Stew. One of the famous guests was Edgar Allen Poe. Until the 1930s , there used to be a glass window that Edgar had scratched his initials on; E.A.P.

Besides being an inn and restaurant, this historical building in the past also has been used as a post office, a general store, and a social center for newly-arrived Welsh Immigrants.

After Mr. Johnson, various owners have run the General Wayne Inn. In 1996, the co-owners, Mr. James E. Webb and Guy Sileo, who were also best friends, were struggling financially. On the day after Christmas, 1996, Guy Sileo supposedly shot to death Webb in one of the third floor offices. (I'm sure the spirits residing there will give their moral support and have welcomed Mr. Webb if he had decided to stay.)

Sileo was convicted of the murder and sentenced to life in prison. Sileo claimed that it was his own hurt mistress, 20 year old Felicia, a chef at the General Wayne Inn, who shot Webb in revenge because Sileo refused to leave his wife for her. Webb had strongly disapproved of the affair between Felicia and Sileo. Felicia later killed herself.

The General Wayne Inn was purchased by Frank Cacciuti in October of 2001. Cacciuti had found great success in running the prosperous Seven Stars Inn, located in Phoenixville, Pennsylvania. As of July 21, 2002, Cacciuti closed the General Wayne Inn because he wasn't making enough money. Business hadn't recovered from the effects of the murder, and the local economy wasn't supporting it.

In 2004, someone else bought the place and made a go of it, as the restaurant was being advertised on the ExperiencePA web site. For some reason this effort didn't work out. When Tom and I visited this building the summer of 2006 during our cross country road trip, the local Jewish synagogue had bought the building, renovated it into a modern building now called Chabad Center for Jewish Life. However, the words, The General Wayne Inn are still displayed proudly on the side of the building, and it is still a historical building as the sign marking it as such still remains.

In 1970, when Mr. Johnson bought The General Wayne Inn, he was well aware of the ghostly tales he had heard since childhood about the place, growing up in Merion, (now Merion Station.) However the reality of having 17 plus, entities as unseen guests took him by surprise, and took awhile to adjust to this ghostly company. Thanks to the work of well-known New Jersey psychics, Jean and Bill Quinn, Johnson was properly introduced to most of them, learned why they couldn't rest, and their critique of the service offered at the Inn, during a 1972 seance held in the dining room, led by the Quinns. The entities communicated directly through the mediums present, in an orderly manner, each taking a turn.

1.Critique of The General Wayne Inn — All the entities present were "generally satisfied" with their "afterlife" at the Inn, but had a few improvements to suggest. While they loved the dinner music provided for the diners, they hated the crash of the drummer's cymbals. While they thought the tea, which they drank constantly, was beyond compare, the gin, beer, and wine didn't taste "quite right," and wasn't up to their standards, concerning spirits.

2. First to speak was the leader of the others, a friendly, courteous German Hessian soldier by the name of Wilhelm, who liked to hang out in the cellar. He was killed during a Revolutionary War battle, while fighting for the British. He couldn't rest because he was buried in only his underwear. Wilhelm was mortified that his Superior officer had his body stripped of its clothes, which included not only his fine uniform, but his new boots as well, so another soldier could wear them. He said that he was still searching for his uniform, so he could be buried honorably & properly.

3.A little boy ghost — He had lost his mother, and couldn't stop crying to say his name or any of the circumstances of his death.

4. Two young, female entities, Sara and Sadie — who were employed by The General Wayne Inn during the mid-1800s. They died before they could solve a distressing problem, which began when a Persian rug peddler came to stay at the Inn. He had told them that he was supposed to meet a potential buyer for his valuable rugs at the Inn. When the buyer never showed up, the peddler asked them to be responsible for the rugs, until he came back, as he was going to go and look for this buyer. When he never came back, these two women were worried that they would be accused of stealing the rugs. Death didn't relieve them of this worry, even 150 years later. They considered the people at this seance assembly to be intruders, and were reluctant to talk about how they died so young. (A guess is that perhaps their deaths were tied into the rugs somehow.)

5. Eight other Hessian soldiers also made a brief appearance, haunting the Inn, perhaps because they couldn't accept their own deaths on the battlefield, and were not ready to go to the other side.

6. An Indian and an Afro-American also made an appearance, as well as others, but they didn't say much.

Sightings and Behaviors of the Inn's Ghostly Guests

1. In 1976, Ludwig, another Hessian soldier, that wasn't present at the '72 seance, made an appearance to a part-time contractor/ psychic Mike Benio. The week that Johnson was on vacation, Ludwig began to appear every night at 2:00 AM in Benio's bedroom, and sat on his bed. He told Benio that he had been killed in a Revolutionary War battle, and that his bones were buried in the cellar wall of the Inn. He pleaded with Benio to dig up his remains, and bury what he finds properly in a cemetery. After getting permission from Johnson, Benio excavated the cellar, and found a small, unknown room, that was under the Inn's parking lot. He uncovered some pottery and some unidentified bones. After burying the bones properly, Ludwig was satisfied, and was at peace.

2. To see if his unseen soldier guests, or others were using the bar, Johnston borrowed a tape recorder from the Quinns. He heard for himself evidence that despite not liking modern alcoholic drinks, the soldiers or others were going to the bar late at night. The tape recorder picked up sounds in the empty building, the noise of swiveling bar stools, the water faucet being turned on, and a glass catching the water, which all began hour after closing time. A visual sighting of a Hessian soldier, sitting slumped at the bar, was made by a customer, who was peering through the Inn's front window, late one Monday night. The Inn is closed on Mondays.

3. In 1986, While Johnson and Scott sat at a table in the dining room, talking, a sharp form of a woman, complete with hands and feet, flurried past them, dressed in a long, billowing white skirt and a long sleeved blouse. Possibly, it could have been either Sara or Sadie going about her business.

4. Johnson came to his Inn one morning to find water in the partially open drawer of the cash register, which points to something a child might do, or perhaps a disgruntled bar patron.

5.Nothing surprised Johnson. Odd things had happened all the time. Mixer attachments and clean towels have been thrown all over the kitchen, both front doors have been found unlocked in the morning, after Johnson and his sons had securely bolted them the night before.

The Hessian Soldiers often made their presences known to the living.

1. The Hessian soldier, whose picture hung in the big dining room, had been seen by several employees. He could be a bit of a bully. He scared poor Nathan, who was sweeping the dining room, by striding menacingly up to Nathan, with a glare in his eye, and walking right through the now terrified Nathan, who left in a hurry, leaving the floor unswept. Johnson, of course, understood.

2. The Maitre De had so many "visual encounters" with friendly Wilhelm in the cellar, that he finally refused to go down there anymore. Johnson, of course understood.

3. A luncheon hostess personally met several German soldiers in various places at the Inn. Some were striding through the dining room, sitting at the bar, and hanging around upstairs, in the private dining rooms.

4. A playful game that the soldiers enjoyed for over a year was blowing on the necks of the young women, sitting on the bar stools.

5. The soldiers, who had a history of mischievous behavior, are suspected as the ones who liked to play tricks on Johnson's wife. Once, when she was trying to help the accountant with various chores in the office on the third floor, she was having a hard time adding up the totals on the adding machine. After trying several times to add up the numbers, and getting the wrong totals, she tested the machine with 2 + 2 and it read 5! She immediately suspected that someone was mischievously tinkering with the machine, so she impulsively ordered the "guys" out of the room, scolding them, telling them that she had work to do. The machine worked perfectly after that, with no reoccurring problems. Ghosts are fascinated with anything electric. Johnson and his ghostly clientele, had accepted each other.

The ghosts had never owned the Inn, and had always shared it with the living. Johnson felt that the ghosts had as much right to be at the Inn as he did, and had taken their habits & personalities in stride, as he generally would with any living patron. For he was in the customer service business, for both the living and his unseen guests.