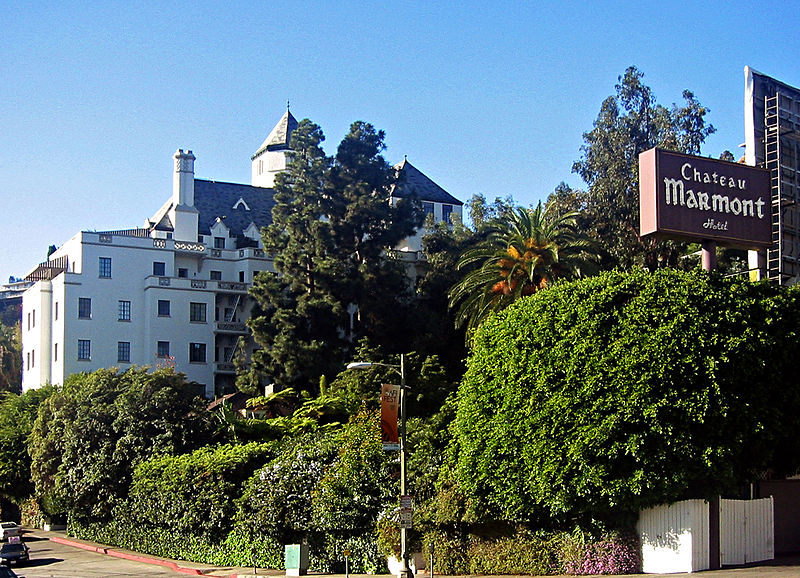 In 1926, Fred Horowitz, a prominent Los Angeles attorney, chose the site at Marmont Lane and Sunset Boulevard to construct an apartment building. The location was converted to a hotel in 1931.

Chateau Marmont is a hotel located at 8221 Sunset Boulevard in Los Angeles, California. The hotel was built in 1929 and was modeled loosely after the Chateau d'Amboise, a royal retreat in France's Loire Valley.

In 1926, Fred Horowitz, a prominent Los Angeles attorney, chose the site at Marmont Lane and Sunset Boulevard to construct an apartment building. Horowitz had recently traveled to Europe for inspiration and returned to California with photos of a Gothic Chateau along the Loire River. In 1927, Horowitz commissioned his brother-in-law, European-trained architect Arnold A. Weitzman, to design the seven-story, L-shaped building based on his French photos. When deciding upon a name for the building, Chateau Sunset and Chateau Hollywood were rejected in favor of Chateau Marmont, a name conceived by the small street running across the front of the property.

On February 1, 1929, Chateau Marmont opened its doors to the public as the newest residence of Hollywood. Local newspapers described the Chateau as "Los Angeles's newest, finest and most exclusive apartment house [...] superbly situated, close enough to active businesses to be accessible and far enough away to insure quiet and privacy." For the inaugural reception, over 300 people passed through the site, including local press. Due to the high rents and inability to keep tenants for long-term commitments during the depression, Fred Horowitz chose to sell the apartment building to Albert E. Smith for $750,000 in cash. In 1931, Chateau Marmont was converted into a hotel. The apartments became suites with kitchens and living rooms. The property was also refurbished with antiques from depression-era estate sales.

Designed and constructed to be earthquake proof, Chateau Marmont survived major earthquakes in 1933, 1953, 1971, 1987 and 1994 without sustaining any major structural damage. Nine Spanish cottages, as well as a swimming pool. were built next to the hotel in the 1930s and were acquired by the hotel in the 1940s. Craig Ellwood designed two of the four bungalows in 1956, after he completed Case Study Houses. During the 1930s, the hotel was managed by former silent film actress Ann Little. During the 1940s, the hotel served as an air-raid shelter for residents in the surrounding area.

On March 24, 1976, Chateau Marmont was named one of Los Angeles' Historical-Cultural Landmarks.

Throughout the years, Chateau Marmont has gained recognition. Director Sofia Coppola shot her film Somewhere at the hotel in 2010. James Franco created a grand scale replica of the Chateau Marmont for his Rebel Without a Cause exhibit at MOCA in 2012. The opening scene of the indie neo-noir film The Canyons was shot at the Bar Marmont. The hotel was also a location for Oliver Stone's The Doors. Singer Lana Del Rey alludes to the hotel in a number of her songs in her album Born to Die. It is also the office of fictional paparazzi Patrick Immleman in the Panel Syndicate web comic The Private Eye.

The hotel is also mentioned in Charles Bukowski's major work Hollywood, and is the setting of the Grateful Dead song "West L.A. Fade-away"

It is also believed that the song by the band The Eagles, "Hotel California", is about the Chateau.

One thing has held strong over the years, and what keeps the Chateau as a popular spot amongst celebrities and the elite of West Hollywood, and that is discretion. If you think Vegas has the slogan, "What happens in Vegas, stays in Vegas"?, they have adopted that from the Chateau.

The hotel's reputation as the place to go to misbehave dates back to the days of the Motion Picture Code of the 1930s and the purity seal of 1934. The code specified not only what could and could not be shown on screen, but also its expectations of a star's behavior off camera. Studios rented apartments and rooms for the express purpose of having someplace safe for their stars to engage in whatever nasty little habits they had. The famous example being Harry Cohn, head of Columbia Pictures, telling two of his randiest young stars, William Holden and Glenn Ford, "If you must get into trouble, do it at the Chateau Marmont."

When it wants to, Hollywood can be exceptionally good at keeping its own secrets. The Chateau, with its own eccentric and highly personal history, was the perfect coconspirator. With its external appearance of a castle or Gothic fort, combined with its residential past, incredibly thick walls, discreet entry, and highly protective staff who treated guests like members of the family, the Chateau Marmont became the ideal hideout. European guests found the architecture familiar and comforting, sexual outsiders felt accepted, the emotionally shy were shielded, and anyone else with a reason to hide simply blended into the woodwork--from the start there was the feeling of a shared sensibility. Greta Garbo felt comfortable here, as did Howard Hughes.


Breaking the code of discretion can get celebrities banned, by the way, so it would be entirely impossible to chronicle every misdeed or story that's ever gone down at the Chateau Marmont, and probably half of these stories are fake anyway, but here's a short and very incomplete history:

- It's widely-said that F. Scott Fitzgerald had a heart attack at the Chateau in the late 1930s (as Hollywood was slowly beating him to death), but it actually happened across the street at Schwab's drugstore while he was buying a pack of cigarettes.

- In 1955, James Dean supposedly jumped through a window to audition for Rebel Without a Cause. Director Nicholas Ray lived in a bungalow at the time, where he was having an affair with underaged Natalie Wood.

- There are a few stories--or probably one muddled story--about Jim Morrison of The Doors having a rough time getting into or out of the building. He supposedly jumped off either a roof or terrace, but was so high he walked away fine. And he also supposedly spent "the eighth of [his] nine lives" falling from a drain pipe that he'd been using to try to swing in from the roof.

- Led Zeppelin rode their motorcycles through the lobby in the 1960s.

- On January 23, 2004, photographer Helmut Newton, who lived at the hotel, lost control of his Cadillac and crashed into the driveway wall. He was killed.

- There is a commonly-denied and non-denied story that Benicio Del Toro and Scarlett Johansson hooked up in the elevator the night before the 2004 Oscars.

- Lindsay Lohan shacked up at the Chateau in the midst of her (first) drunk driving scandal.

- During her public meltdown phase, in September 2007, Britney Spears was temporarily banned from the Chateau for smearing her face with food, disgusting fellow diners.

- Lohan was finally banned in 2012 (she'd been living in Suite 33) after racking up a $46,350.04 tab on stuff like cigarettes, candles, iPhone chargers, and copies of Architectural Digest.

- One of the most publicized incidents at the Chateau was that On March 5, 1982, comedian John Belushi died from a speedball injection in Bungalow 3.


Haunted hotels are no laughing matter -- unless you're staying at Chateau Marmont in West Hollywood. Known for wild parties and a history of A-list celebrity guests (from Marilyn Monroe to, more recently, Lindsay Lohan), Chateau Marmont has served as the choice crash pad for the famous since 1927. One celebrity who stayed and never left is comedian John Belushi, who died at the hotel from a heroin and cocaine overdose in 1982. Belushi was later discovered dead in Bungalow 3, which remains the site of many strange occurrences.

The most notorious incident occurred in 1999, when a family temporarily moved into Bungalow 3 while their house was being renovated. The family's 2-year old son was often found laughing and giggling by himself. When asked what he was laughing at, he would respond, "The funny man." When his mother was leafing through a book of celebrity guests of Chateau Marmont, the boy pointed to John Belushi and exclaimed, [look mom,] "The funny man!"