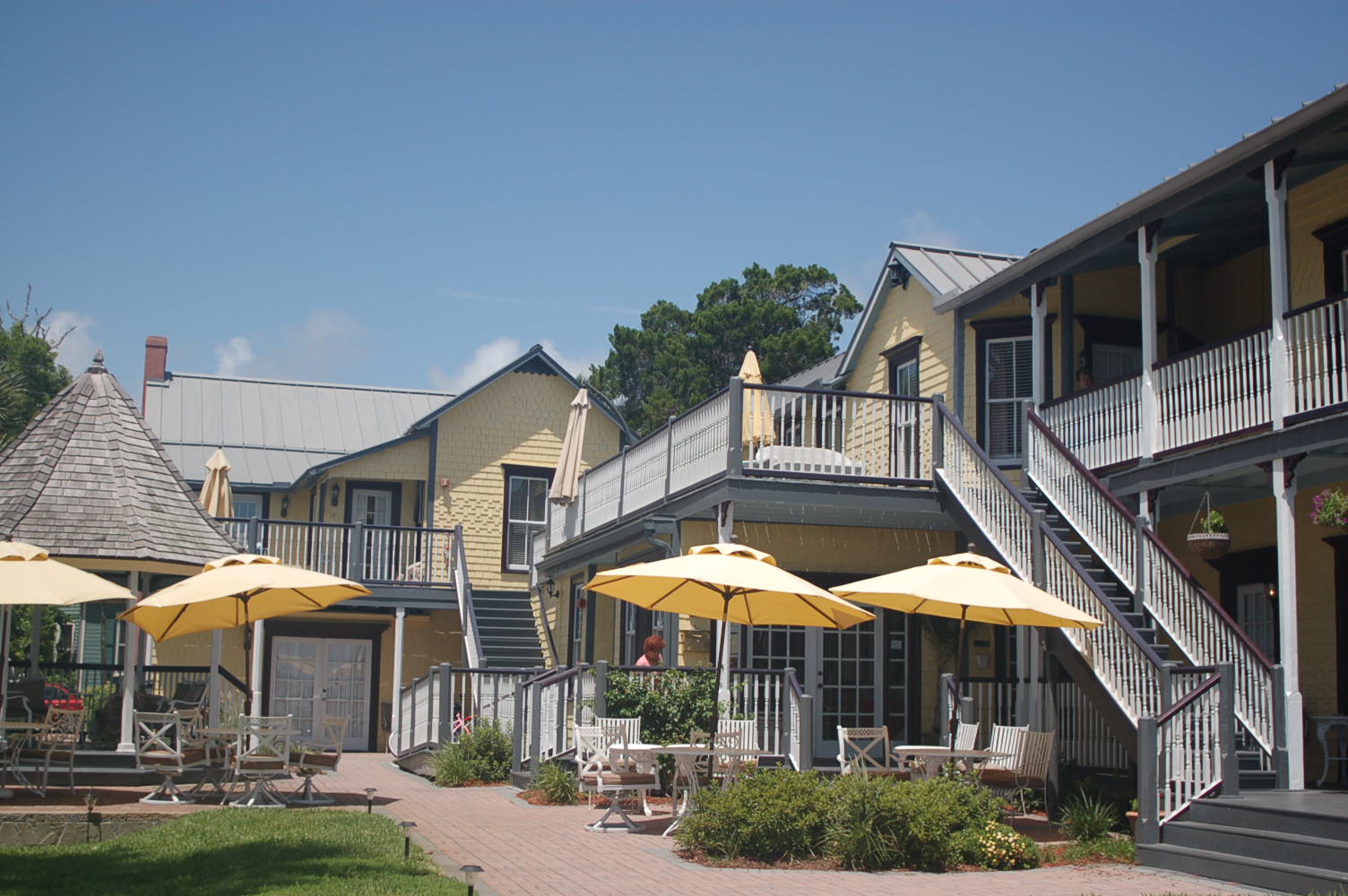 The first notice of a house on the property that is now home to The Bayfront Marin House, is in the Roque map of 1788, which shows a wooden building in bad condition.

The first notice of a house on the property that is now home to The Bayfront Marin House, is in the Roque map of 1788, which shows a wooden building in bad condition. Francisco Marin, one of the members of the Minorcan colony who had taken refuge in St Augustine, acquired the house and lot in the 1780's. The conditions finally being met, Governor White gave the title of the lot to Francisco Marin, Jr. in 1806.

The colonial house at 47 Marine Street (the rear section of the front lot at 142 Avenida Memendez) dates from the Second Spanish Period. It clearly shows the effects of the early regulations laid out by a royal ordinance issued by the King of Spain in 1573. It decreed that in hot climates, the streets should be narrow, and that: "All town houses are to be so planned that they can serve as a defense or fortress against those who might attempt to create disturbances or occupy the town."

The house at 47 Marine Street is built right to the street line, with masonry walls extending north and south from the facade, as if to enclose a compound. Entry is not from the street, but rather through a door on the south side (which is now the entrance to The Francisco Marin Room).

Captain Henry Belknap came to St Augustine as guests of the Alcazar, but fell so in love with the town that he bought the Victorian Cottage that stood at 142 Bay Street (now Avenida Menendez). This beautiful home was once named the Hopkins Cottage for its prior owners. Captain Henry also purchased a cottage owned by Andrew Burgess in 1893, that was located just north of the Marin house, moved it east on the lot, and attached it to the back of his own home.

Quickly thereafter, he bought the remodeled coquina Marin house and began to make wooden additions to it. Thus three houses, ranging in time from the colonial period to the Flagler era, combine to make the current rambling structure, long a St Augustine landmark.

After the death of Captain Henry in 1909, the rambling building was sold to John Cambell, who transformed the once single-family residence into modern apartments or flats.

In 1932, the building was sold to Beulah Robinson Lewis of Virginia, who kept it in her family until it was purchased by the Graubard and Stacklum families in 1988.

The apartment building was remodeled and operated as The Villas de Marin, a collection of short-term rental units for 14 years.

The house was most recently converted into the magnificent Bayfront Marin House: Bed and Breakfast Inn, which was fully restored and open for business in July of 2003.

Former New York lawyer Robert Graubard owns the Bayfront Westcott House and the Bayfront Marin House, two of St. Augustine's luxury inns located on the Matanzas Bay. There is a rich history here that makes your stay a wonderful walk in the past, however, where there's history, there's usually a ghost. The Bayfront Marin House has at least one ghost - most certainly the most dominant one. He is believed to be the spirit of Francisco Marin, after whom the inn is named. The innkeepers say Francisco seems to be a light-hearted soul, quite the partier and prankster. Their favorite story of Francisco happened last year when a guest in one of the first floor rooms came down in the morning to complain of the experience he had the night before. He said that around 2:00 a.m., the room above his was partying so loud that he finally went up the stairs and knocked loudly on the door. He said that no one came to the door, but that the noise stopped completely and he went back to his first floor room satisfied that he had gotten his message across. Thirty minutes later, the noise had risen back to its original decibel level and the guest was starting to get annoyed. He went back up to the room above his and knocked loudly and yelled that the revelers were disturbing him and his wife and that he would need to call the police if they didn't knock it off. Again, the party guests failed to answer the door, but again it became immediately silent behind the door. The guest returned to his room and slept soundly with no further disturbance.

When the innkeepers informed him that there were no other guests in any of the rooms above his, he insisted that he see the party room because there must have been a mess left behind. The innkeepers opened the door to a spotless room left exactly as the housekeepers had left it the day before. The guest turned a few shades of pale when he realized that, indeed, no living person had been in that room the night before. Then he brightened and got very animated, thinking of all the ways he was going to describe this experience to his friends and family.

The innkeepers went on to say "Francisco doesn't show up very often, but when he does, it is always in the spirit of fun. This last week we had trouble with one of the telephone lines in the inn. An expert with thirty four years experience in the telephone business came to trouble shoot. When he tapped into the line, which was completely dead from some problem at the street, there was a catchy tune playing that only came into his receiver. We asked him if in his vast experience in St. Augustine phone business, if he often encountered such ghost activity. His answer was... more than you can imagine."