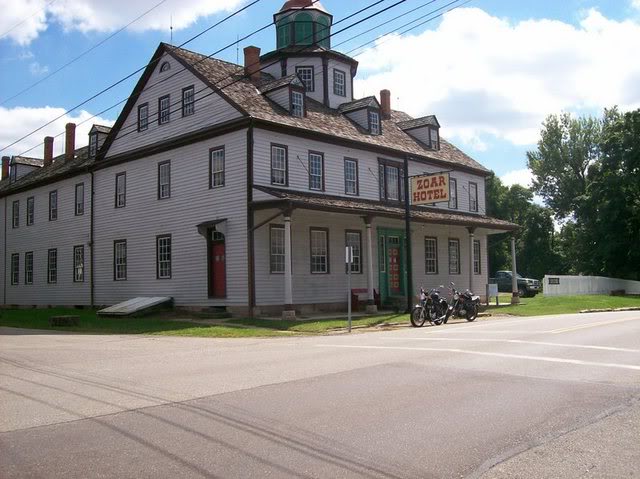 Founded by the German religious dissenters called the Society of Separatists of Zoar in 1817 as a communal society, Zoar today is an island of Old-World charm in east-central Ohio.

Founded by the German religious dissenters called the Society of Separatists of Zoar in 1817 as a communal society, Zoar today is an island of Old-World charm in east-central Ohio. Many of the German-style structures built by the Zoarites have been restored and are open to the public as Zoar Village State Memorial. Others are privately-owned, and serve as residences, shops, restaurants and bed and breakfast inns.

Visitors can experience the life of the agrarian Separatists by visiting the ten restored buildings (Number One House, Kitchen/Magazine Complex, Garden House, Bakery, Tinshop, Dairy, Wagon Shop, Blacksmith Shop and Zoar Store), which are staffed with costumed interpreters and furnished with items made or used by the Separatists. Some buildings are staffed, others open by guided tour. Volunteers give craft demonstrations during the many yearly special events.

Books 'n Things - This bookstore is said to be haunted by a ghost of a tinsmith who once lived there. The aroma of coffee is often smelled when no coffee is being made. The ghost often rocks back and forth in a rocking chair and has been known to tuck in the store's owners at night.

Cedar Mills Bed & Breakfast - Formerly a cabinet shop, a worker in the mid-1800s reported that the ghost of an Indian visited him, giving accurate predictions about the Civil War. The ghost predicted the outcome of the Battle of Gettysburg and President Abraham Lincoln's assassination. It is not known if the Indian still visits the building.

Cobbler Shop - The ghostly figure of a man wearing a long, dark coat is said to haunt this 1800s building where shoes were made for the Society of Separatists of Zoar. Now a bed-and-breakfast, guests report hearing unexplained knocking on their doors and ghostly footsteps in the hallway.

Cowger House - The ghostly voice of a man named PJ can sometimes be heard in this bed-and-breakfast. He is believed to be a former owner of the house.

Ghostly Farm Field - Mysterious balls of light, some several feet in diameter, haunt this otherwise ordinary near Zoar just east of Route 212. It is said if you get too close to them, they will chase you away.

The Inn of the River- A ghost by the name of George is said to haunt this inn, knocking objects from shelves and causing other mischief. It is believed that he died when his boat sank in the canal. The mysterious sound of Patsy Cline music can be heard even though there are no Patsy Cline records in the building.

Zoar Historical Village- Several ghosts have been reported in the historic village. One haunting is in an old nursing home where the elderly were said to be abused by the matrons hired to look after them.

Zoar Hotel - Three ghosts are said to haunt the hotel of this historical village. Alexander Gunn, Mary Rouf, and an unknown woman are known to haunt the hotel. A ghostly party can sometimes be heard on the hotel's top floor. The sounds of glasses clinking and people talking can be heard when no one else is there.

Zoar School Inn Bed & Breakfast - Objects mysteriously move and dog kibble is found in strange places. Some have reported hearing the sound of furniture moving upstairs when no one is on the second floor.

Zoar Tavern - This building was once home to the village's first doctor. Many ghostly activities are known to occur in all parts of the tavern.