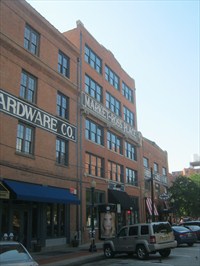 Constructed in 1909, this building was first occupied in 1910 by the Hobson Electric company. The warehouse was next leased to the Maroney Hardware Company, which was bought in 1926 by Rufus W. Higginbotham and Hyman Pearlstone.

Constructed in 1909, this building was first occupied in 1910 by the Hobson Electric company. The warehouse was next leased to the Maroney Hardware Company, which was bought in 1926 by Rufus W. Higginbotham and Hyman Pearlstone, owners of the Higginbotham - Pearlstone Wholesale Hardware Company, which was located here until 1977. The four-story brick industrial building, featuring corbelled cornices, remains as a focal point of the city's historic west end. RTHL 1986

This building used to sell large farm equipment. Inside the building there is a path that was used by donkeys to pull the large equipment from floor-to-floor. This ramp is wrapped around the interior of the building and still exists today.

A woman who was to be married was in the building talking over marriage arrangements with her father in his office on the top floor.An argument pursued and the woman went running out of the office, upset and ran down the ramp. This was not a safe place for people to travel since there was constantly equipment being moved from floor to floor.

Although several people yelled at her to stop and take a different route, since she was in hysterics, she did not head their warnings. When she got to the bottom of the ramp, she took a wrong turn and instead of leaving through the public entrance, she ran out the loading dock and fell off landing in the street hitting her head and being knocked unconscious. At the same time, a trolley car was coming down the street and crushed her. She died instantly.

People have claimed seeing an "echo spirit" of a woman running down the ramp and out onto Market Street. Then she disappears. There is no set time as to when this happens and it is an intermittent occurrence. It is said that she is a full apparition, so it is possible that it occurs more frequently, but the spirit does not always have enough energy to be seen. 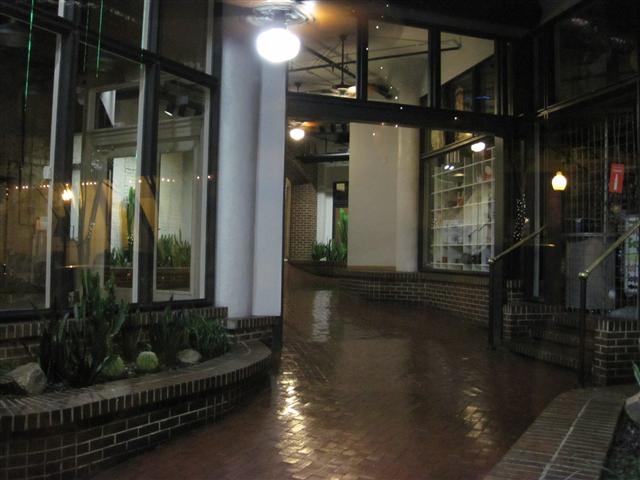