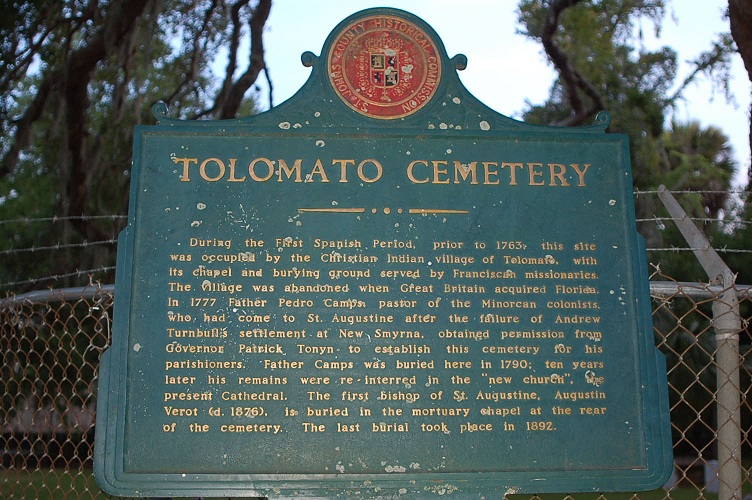 Tolomato Cemetery in St. Augustine is the oldest extant planned cemetery in the State of Florida, with burials starting during the First Spanish Period (1565-1763).

Tolomato Cemetery in St. Augustine is the oldest extant planned cemetery in the State of Florida, with burials starting during the First Spanish Period (1565-1763). It was the site of a Franciscan mission built just outside of the old city walls as a home for Guale Indians from the Tolomato mission in Georgia. The mission chapel, circa 1726, was a simple wooden structure with a thatched roof and a remarkable four-story coquina bell-tower on the east facade.

A group of German Catholics came to live at the mission during its last year, and it was sometimes referred to as the German or Dutch church. With the advent of British rule in 1764, the remaining Indian and other mission residents departed with the Spanish population to Cuba. Burials ceased at this time.

In 1777, a large group of Minorcan indentured laborers, fleeing mistreatment on an indigo plantation, took refuge in St. Augustine. Since they were Catholics, they were given permission to use the cemetery and burials resumed.

During the Second Spanish Period (1784-1821), the cemetery was once again used for all Catholic burials. Burials at all St Augustine cemeteries officially ceased in 1884, when the city prohibited burials within the city limits for health reasons, although it is known that a few clandestine burials took place at Tolomato in the following years.

This historic cemetery has more than 1,000 burials and is one of the most significant cultural sites of St. Augustine. In addition to Christian Indian burials, we have documented burials of people from places including Spain, Africa, Italy, Greece, Corsica, Germany, Ireland, Haiti, Cuba and Canada. Hundreds of the identified burials are those of Minorcans.

By 1811, the Spanish had created a formal plan for the cemetery. The Library of Congress holds a copy of a Spanish drawing from this period, making Tolomato the first planned cemetery in Florida.

The landscape has changed. In his 1765 trip through Florida, naturalist William Bartram commented on the ruined state of the bell tower, but it survived until the 1790s, when it was dismantled so that the coquina could be used in the construction of what is now the Cathedral-Basilica of St. Augustine. The current chapel was built in 1853 and there are 18th and 19th century headstones and monuments.

Important individuals buried at Tolomato include; Bishop Augustin Verot, first Catholic Bishop of St. Augustine, and Fr. Miguel O'Reilly, the first pastor of what is now the Cathedral. The Venerable Fr. Felix Varela, intellectual author of Cuban independence and in process of canonization, was initially buried here. Fr. Pedro Camps and Fr. Narciso Font, Catalan-speaking priests who served the Minorcans, were also first buried at Tolomato, and General Biassou, hero of Haitian independence, is buried here. Research on the burials is an ongoing project.

The cemetery is the property of the Cathedral-Basilica of St. Augustine.

One of the more popular stories of the Tolomato is the "Ghost Bride", a sad woman dressed in a wedding dress often seen walking amongst the stones. Those who have seen her describe an overwhelming sadness that washed over them, making them want to leave.

Many others have seen a small child standing at the gate, asking other children to come play with him. Some have witnessed the spirit of a young Indian boy who died while climbing in the tree that still stands at the front gate.

Not all of Tolomato's spirits are so pleasant. A much darker spirit has been reported to chase visitors away from the cemetery. Those that have encountered him describe him as a tall shadowy man who is threatening and emits a feeling of intense anger!

The story goes that Colonel Joseph Smith, during his first week in Saint Augustine, met a lovely couple and became friends instantly during a party. Plans were made for the couple and the Colonel to meet later. The next night, the woman fell terribly ill and was pronounced dead within a week. The husband then invited the Colonel to attend the funeral, and even asked him to help walk in the funeral procession.

As was family tradition, the deceased girl was placed into a chair and was carried to Tolomato Cemetery in a seated position. The beautiful woman was carried in the chair all the way from the town to the cemetery, with every bump and jostle moving the deceased woman. During the procession, the woman in passed underneath an Apopinax tree located in the cemetery, puncturing her skin on her forehead. This caused copious amounts of blood to pour from the girls head, causing Colonel Smith, who had yet to take a eye off the dead girl, to believe that he saw the girl blink.

Colonel Smith insisted to everyone that the girl was not dead as everyone assumed that she was, and eventually was able to bring the woman home. After a few days, the girl awoke to everyone's amazement, and proceeded to continue living for another 6 years. Colonel Smith is accredited with saving the girls life, because otherwise she would have been buried alive.

Skip forward another 6 years, and again, the woman died. And again, she was paraded to the Tolomato Cemetery, just as it had before. This time, the husband shouted to not bring the girl anywhere near the Apopinax tree, stating that he couldn't handle it if the woman was again, not dead.

This funeral went off without any incidents, and it is generally believed that the woman was truly dead this time she was supposed to be buried, although some people claim that she was laid out for a week before being buried to make sure that she was actually dead.

One of the Bishops that served the faithful Catholics in St. Augustine passed away during a typically stifling summer. He was held in such high regard that his funeral was delayed until mourners from across the eastern United States and from as far away as Cuba could come to pay their respect. In order to keep the Bishop's body from deteriorating, he was sealed in a metal lined, airtight casket fitted with a glass window, so that the grieving could still gaze upon his noble visage.

In those days, travel was slow. Two weeks passed before the Bishop's staff decided that they had given the mourners enough time to assemble. Hundreds packed into the modest chapel in Tolomato Cemetery as the funeral mass was finally read for the Bishop.

During the High Mass, strange sounds started emanating from the clergyman's coffin. The coffin itself seemed to vibrate. The audience gasped in fear and amazement. Suddenly with a thunderous CRACK!, the coffin split open at its seams and the body of the Bishop, swollen by gases caused by extensive decomposition aided by the hot Florida weather, burst into pieces, spraying the attendants with pulpy, gooey innards and soaking the whole chapel with the stench of rotting flesh. Surely this was a funeral that no one in the church could ever forget. No matter how hard they may have tried.

A terrible tragedy occurred on November 28th, 1877 when a young boy named James P. Morgan lost his grip while up in the large oak tree just inside the Cemetery Gates and fell to his death. It was just 10 days after his 5th birthday.

He had probably been named for the legendary banker and business tycoon who was 35 years old at the time of young James' birth. Young James is buried near the tree and it is said that some people, especially children, can see him running around the tree and nearby areas in a happy and laughing manner.

Click on the source link below to view pictures taken that could possibly show the apparition of James up in the tree that he fell out out of, as well as, a picture of his head stone.