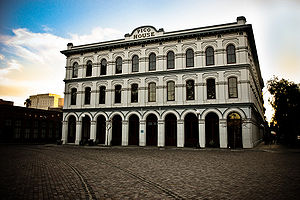 The Pico House Built by Pio Pico, last governor of California under Mexican rule, who lived almost the entire length of the nineteenth century, from 1801 to 1894.

The Pico House Built by Pío Pico, last governor of California under Mexican rule, who lived almost the entire length of the nineteenth century, from 1801 to 1894. This was the first three story building and the first grand hotel in Los Angeles. Pico chose architect Ezra F. Kysor to design the "finest hotel in Los Angeles". Construction began on September 18, 1869, and the hotel opened for business on June 9, 1870. To raise funds for the building and furnishing of the hotel, Pío and his brother Andrés sold most of their vast landholdings in the San Fernando Valley. The hotel was built in the Italianate style, with deep set round-arched windows and doors and the Main Street and Plaza facades were stuccoed to resemble blue granite. The hotel had eighty two bedrooms and twenty one parlors as well as bathrooms and water closets for each sex on each floor.

The Pico House is a historic building in Los Angeles, California, dating from its days as a small town in Southern California. Located on 430 North Main Street, it sits across the old Los Angeles Plaza from Olvera Street and El Pueblo de Los Angeles Historic Monument. Its geographic coordinates are

Pío Pico, a successful businessman who was the last Mexican Governor of Alta California, ordered construction of a luxury hotel in the growing town. The architect was Ezra F. Kysor, who also designed the Cathedral of Saint Vibiana, and it was constructed between 1869 and 1870. The resulting Italianate three story, 33-room hotel, dubbed Pico House (or Casa de Pico) was the most extravagant and lavish hotel in Southern California, and its opening was cause for much celebration. It had a total of nearly eighty rooms, large windows, a small interior court, and a grand staircase. In the days of the hotel's primacy the courtyard featured a fountain[1] and an aviary of exotic birds.[2] The structure forms three sides of a trapezoid of which the open end immediately abuts the adjacent Merced Theatre, thus forming the courtyard. The back of the hotel faces Sanchez Street,[3] where the large carriage entrance can still be seen.

Its time in the spotlight did not last very long. By 1876 the Southern Pacific Railroad had linked the city with the rest of the country and more residents and businessman began pouring in. Pio Pico himself started having financial troubles, and lost the hotel to the San Francisco Savings and Loan Company. The business center of the city began to move south and, by 1900, the building began to decline. After decades as a shabby lodging house, it finally passed into the hands of the State of California in 1953, and it now belongs to the El Pueblo de Los Angeles State Historic Monument. Parts of this building were renovated in 1981 and 1992. The ground floor is occasionally used for exhibits and other events.

The Pico House is currently listed as a California Historical Landmark (No. 159) and a National Historic Landmark as a part of the Los Angeles Plaza Historic District (NPS-72000231).

The Pico House is featured prominently in the Star Trek: The Next Generation two part episode Time's Arrow, filling in as turn of the 19th to 20th century San Francisco.

The back end of Pico House is also used in the hit TV show The Mentalist. It is used as the CBI HQ and is frequently shown during the show. Pico House was also used, in August 2009, as the shoot location for JLS's video for their single, Everybody In Love. On January 7, 2011, the building was featured on Travel Channel's Ghost Adventures with Kane Hodder, and Rick McCullum.

The Pico House was once the most lavish hotel in Southern California and is now a California and National Historic Landmark. Long closed and now part of the El Pueblo De Los Angeles National Monument, the Pico House has had numerous reports of paranormal activity ranging from mysterious footsteps on the upper floors to shadow figures in the inner courtyard.