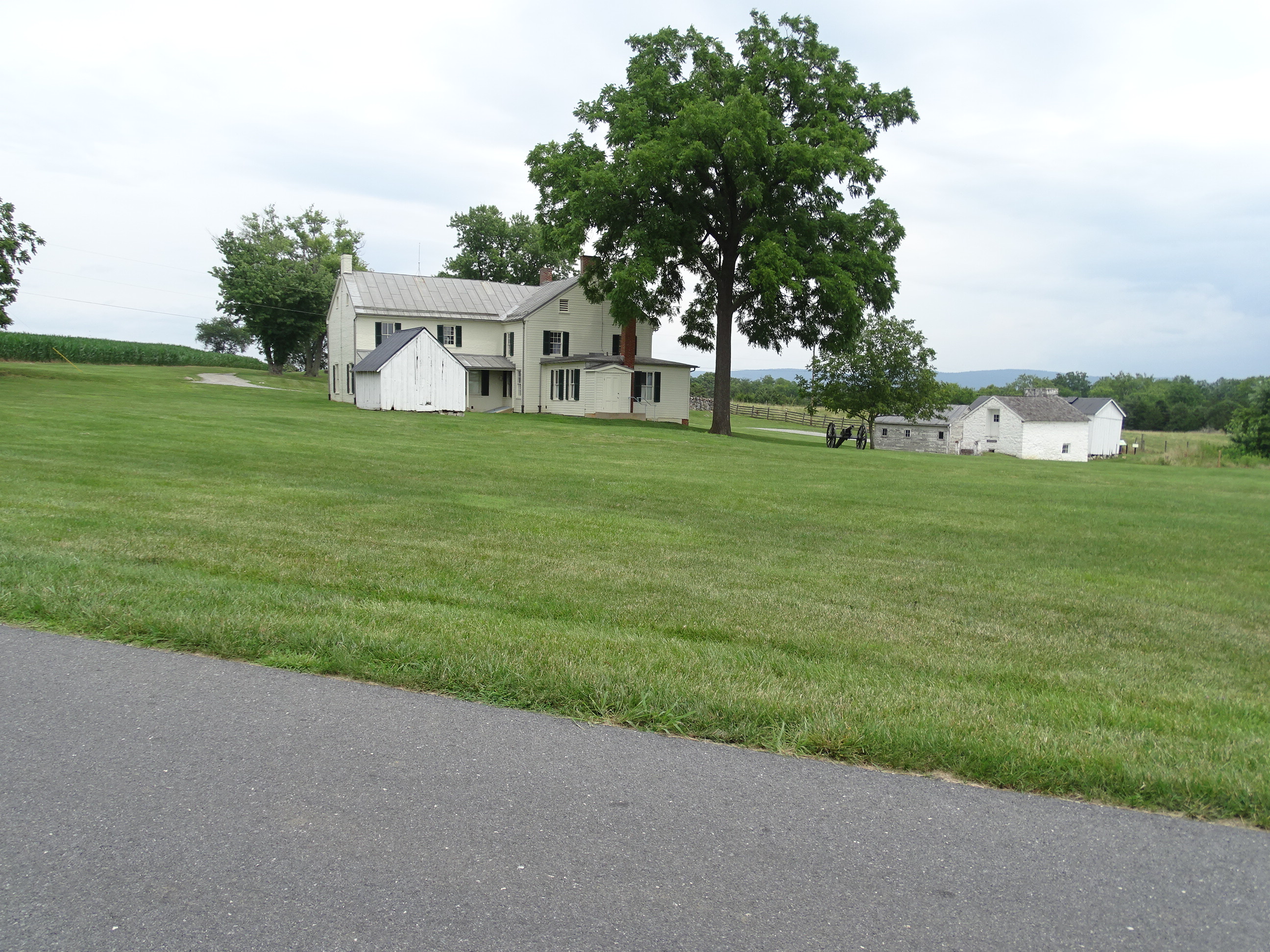 The only deliberate destruction of property during the battle was the burning of this farm. This location is a private residence.

The only deliberate destruction of property during the battle was the burning of this farm. Confederate soldiers were ordered to burn these structures to prevent their use by Union sharpshooters. Fortunately, Samuel Mumma and his family had fled to safety before the battle. The Mumma family rebuilt the home in 1863.

"...a set of farm buildings in our front were set on fire to prevent them being made use of by the enemy." Confederate General Roswell S. Ripley.

This farmstead and cemetery were part of Samuel and Elizabeth Mumma's property in 1862. Warned of the coming battle, the Mummas and their ten children fled to safety. Fearful that Union sharpshooters would use the farm buildings as a strong point, Confederates set fire to them. The column of fire and smoke was visible all morning above the battlefield. This fire was the only deliberate destruction of civilian property. One Union soldier remembered, "Just in front of us a house was burning, and the fire and smoke, flashing of muskets and whizzing of bullets, yells of men "were perfectly horrible."

The Mummas spent the winter at the Sherrick farm near Burnside Bridge and were able to rebuild in 1863. After the war, the Federal Government compensated residents for damage caused by Union soldiers. However, since this farm was burned by Confederates, the Mummas received no compensation. Starting in 1870 the family deeded interest in this burial ground to local families. Neighbors who suffered from war and came together to rebuild their community, now rest together in this peaceful enclosure.

At the time of the Battle of Antietam, the Mumma family had owned and successfully operated a farm near Sharpsburg for more than a quarter of a century. Two days before the Battle of Antietam, Samuel and Elizabeth Mumma and their 13 children evacuated their home. When they returned on September 19, they found only the smoking remains of their house, barn and outbuildings. They later learned that during the early stage of the battle, Confederates positioned in the vicinity were ordered to set the Mumma house on fire in order to prevent Union soldiers from utilizing it as a sharpshooter position. This was the only deliberate destruction of civilian property during the battle. Though they filed a claim with the federal government to be reimbursed for the damage, their claim was denied, as the damages were caused by Confederate, not Union, troops. The year after the battle, the Mummas rebuilt their farm, which still stand today.

From a Paranormal Investigation Report

Mari saw a black shadow move at the far end of the cemetery and in trying to trace down this figure, the Melmeter spiked to a .3 and then back to zero quickly. We also heard some very strange sounds and noises in the distance.

Rod, Mari and I wandered around the back of the house conducting some EVP and taking pictures when I suddenly noticed a very dark figure quickly dart either around the building or into the side door. I couldn't be sure which. I can only hope he went around the building and was captured on the IR camera.


While researching this location, we found a post on the GhostsofAmerica.com website posted by Joshua. He said that he stayed behind to look around at the cemetery, when his family when back to the car. We looked over at the far corner of the cemetery and saw a women dressed in white, bending down at one of the tombstones. He turned back to get someone to come and witness this, and when he looked back, the figure was gone.


On page 114 in a book by Jeff Belanger title, "Ghosts of War: Restless Spirits of Soldiers, Spies, and Saboteurs, " he describes and EVP that was captured by paranormal investigator, Ron Hughes. Hughes left his recorder set to record based on sound sitting on one of the graveyard walls, and he captured what sounded like military commands such as, "Go!," and "load muskets!"