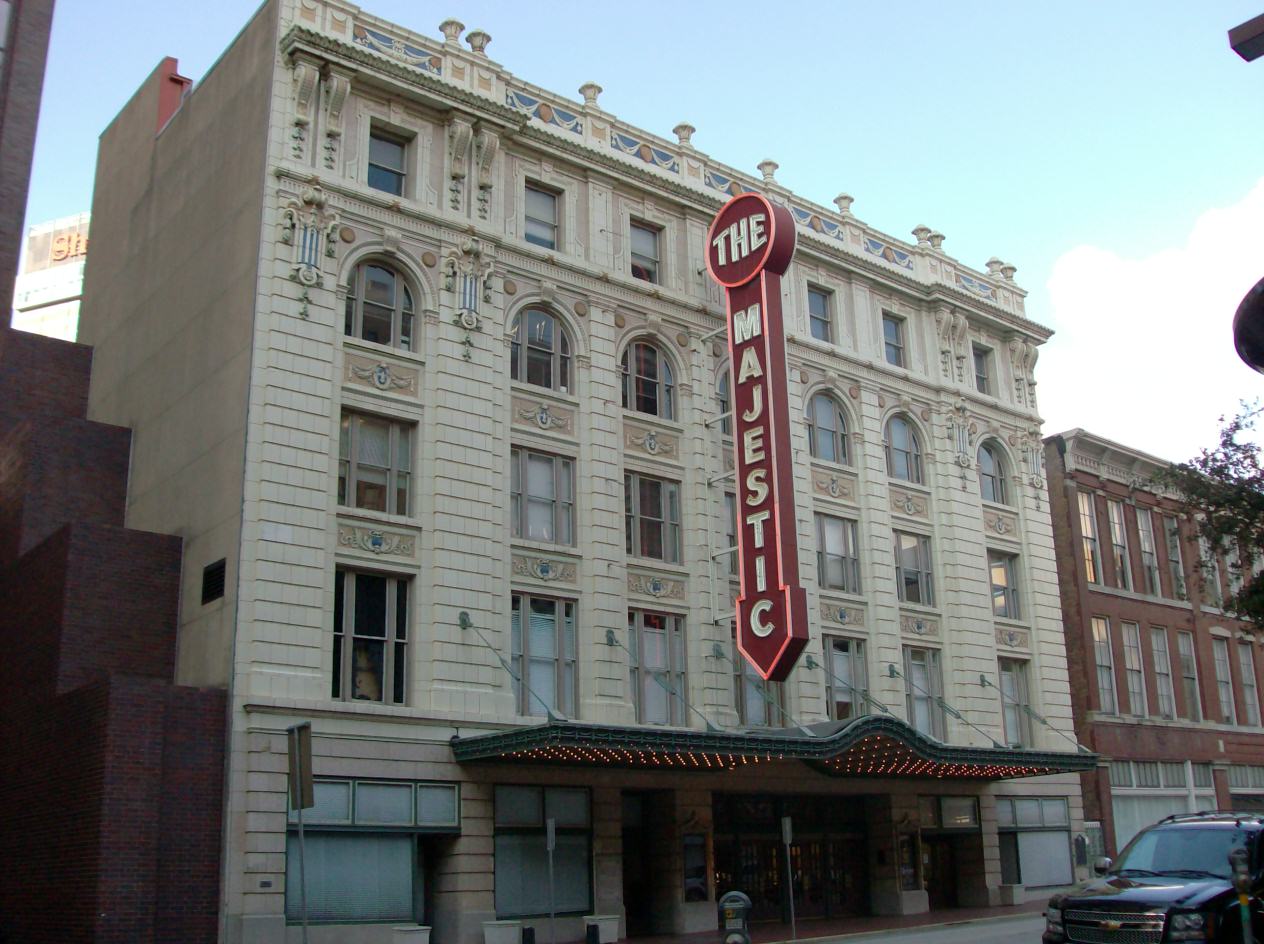 Designed by John Eberson under direction of Karl Hoblitzelle, the Majestic Theatre was constructed in 1920 as the flagship theater for Interstate Amusement Company, a chain of vaudeville houses.

Designed by John Eberson under direction of Karl Hoblitzelle, the Majestic Theatre was constructed in 1920 as the flagship theater for Interstate Amusement Company, a chain of vaudeville houses. The $2 million Renaissance Revival structure opened on April 11, 1921 with a seating capacity of 2,800. It replaced a previous theater of the same name (located at Commerce Street and St. Paul Street) which burned down December 12, 1917. Operations of the Majestic were moved to the Dallas Opera House which was renamed the Majestic Theater until the new Majestic was completed.

The interior was originally divided into theater and office space, with 20,000 square feet (1,900 m2) of the upper four floors used as the headquarters of the Interstate Amusement Company. The interior lobby and auditorium was of baroque design with decorative detailing consisting of Corinthian columns, egg-and-dart molding, cartouches, and Roman swags and fretwork. The lobby contained a magnificent black-and-white Italian-style Vermont marble floor and twin marble staircases. Other features included an ornate cage elevator serving the two balconies, crystal chandeliers, brass mirrors, ferns, and a marble fountain. A concession stand was added to the lobby in the late 1940s.

The auditorium featured a ceiling "sky" of floating clouds and mechanically controlled twinkling stars. Seating was provided on the main floor and in two balconies in woven cane seats. The stage was flanked by massive Corinthian columns, with an orchestra pit in front. Backstage consisted of twelve dressing rooms, a loft to accommodate scenery, and a set of wooden lighting controls. A Kilgen theater organ opus 3054 size 2/8 was also installed.

The Majestic was the grandest of all the theaters along Dallas's Theatre Row which stretched for several blocks along Elm Street. The Melba, Tower, Palace, Rialto, Capitol, Telenews (newsreels and short-subjects exclusively), Fox (live burlesque), and Strand theatres were all demolished by the late 1970s; only the Majestic remains today.

The Majestic hosted a variety of acts from Houdini to Mae West and Bob Hope during the vaudeville era. Beginning in 1922, films were added to the regular vaudeville offerings. The theatre began hosting movie premieres and associated stars such as Jimmy Stewart, Gregory Peck, and John Wayne. The Big Bands featuring Cab Calloway and Duke Ellington continued the tradition of live entertainment at the Majestic.

In 1932, the Majestic began showing movies exclusively. It was known as the "man's house" featuring films of Humphrey Bogart, James Cagney and other macho heroes while the nearby Palace was known as the "ladies' house" featuring films with female leads. On July 16, 1973, the Majestic Theatre closed after the final showing of the film "Live and Let Die".

Lo and behold, a few weeks went by and Slaughter received a phone call from an unknown individual about the Majestic Theatre.The person calling used to work at the Majestic Theatre and talked about what he saw, heard or felt during that time. One night he was walking near the stage and observed a man sitting in the balcony. No one should have been there then. He decided to see if he could help the gentleman but when he got to the balcony no one was there, much less in a seat. He had no idea who the man may have been. People he worked with would talk about hearing their names called when no one else was around, or props that would be out the next morning when they were put up the previous night.


The Majestic Theatre on Elm Street downtown began its life as a vaudeville theater and is the last remaining remnant of the city's once-thriving Theater Row. Entrepreneur Karl Hoblitzelle built the Renaissance Revival theater as the flagship of the Interstate Amusement Co., and it housed both performance and office space.

All the big names of vaudeville played the Majestic - Mae West, Bob Hope, even Houdini. Movies were added to the repertoire in 1922, and were shown until the theater closed in 1973 (the last film, appropriate considering the ghostly activity, was Live and Let Die). It also was used as a film location for Brian De Palma's 1974 film (yes, more spooky connections) Phantom of the Paradise. In 1977 the Majestic was listed on the National Register of Historic Places, and it reopened in 1983 for performances of musicals, dramas, concerts and comedy.

Hoblitzelle, some say, never left, although he died in 1967. I'd have to agree with them. When I was in my 20s, I worked at the Dallas Ballet, which had its offices on an upper floor of the building. There was a door in my office that led into the theater, and one of my duties was to make sure that door was closed and locked every night. Many mornings, I would come in and find it standing wide open, even though I was sure I'd locked it the night before.

When I finally brought this up with my boss, he laughed. "Oh, that's Karl. This used to be his office, and he likes to use his personal door to go into the theater to check things out." I never could get that door to stay closed, and there was often an inexplicable chill in my office. I learned to take a sweater to work, and I began saying goodnight to Karl every night before I left.

Many visitors and workers have reported similar experiences, in addition to backdrops moving around on their own, odd smells and the presence of a man in one of the balcony seats who vanishes when anyone goes to check on him.